The Blind by A.F. Brady- Feature and Review 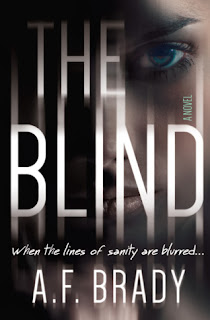 ABOUT THE BOOK:
With the intensity and rawness of Girl, Interrupted and Luckiest Girl Alive comes this razor-sharp debut, which reveals how one woman can go so far off the deep end, she might never make it back up
Sam James has spent years carefully crafting her reputation as the best psychologist at Typhlos, Manhattan's most challenging psychiatric . She boasts the highest success rates with the most disturbed patients, believing if she can't save herself, she'll save someone else. It's this savior complex that serves her well in helping patients battle their inner demons, though it leads Sam down some dark paths and opens her eyes to her own mental turmoil.
When Richard, a mysterious patient no other therapist wants to treat, is admitted to Typhlos, Sam is determined to unlock his secrets and his psyche. What she can't figure out is why does Richard appear to be so completely normal in a hospital filled with madness? And what, really, is he doing at the institution? As Sam gets pulled into Richard's twisted past, she can't help but analyze her own life, and what she discovers terrifies her. And so the mind games begin. But who is the savior and who is the saved?
In this unexpected and addictive psychological debut, A.F. Brady takes readers into the psyche of a deeply disturbed woman desperately trying to keep her head above water, showing that sometimes what's is what exists in your mind.
LISTEN TO AN EXCERPT:

The Blind by A.F. Brady is a 2017 Park Row Books publication.

I have started and stopped this review at least three times this past week trying to figure out a way to explain this book and my experience with it, so I hope it makes sense.

Sam James is a top psychologist at ‘Typhlos’ a psychiatric hospital, which houses some of the most difficult and hard to treat patients.

Sam appears confident and healthy with everything going for her. But, she is hiding her own dark demons, barely functioning, dealing with toxic relationships in her personal life, which are beginning to bleed over into her professional life.

However, Sam will face a challenge like she’s never previously encountered, when she begins treating Richard, a man recently released from prison. His file is practically empty and he refuses to cooperate with the hospital’s traditional treatment therapies. But, the longer she ‘treats’ more becomes about her personal failures, analyzing her own life.

Could the servant become the master?


This novel took me by surprise. It’s brilliant in some ways, very unusual in others, and extraordinarily unique. But, I did struggle through the first half of the book, which was confounding in many aspects. I had almost begun to think Sam had a dual personality disorder or something. Her professional life was a stark contrast from her personal life and I marveled at how she managed to get through a day of work in her condition.

In my struggle to figure out just what the bleep was going on in this novel, I dreamed up all kinds of scenarios, but I was way off base. The way the story seems to shift from total chaos to a weird sort of quid pro quo was mesmerizing, but it did take a little too long to get to that point.

In the meantime, there are some brutal passages to endure and the characters are all pretty messed up, and I’m not just referring to the patients.

There is a major twist, one only a psychological thriller about psychologists could dream up and the result is fascinating and completely unexpected.

This book was very hard for me to get into, but I did appreciate the author’s insider knowledge, which did add much authenticity and compassion to the story. But, the slow buildup is a killjoy, really hurting the momentum, which was very frustrating for a while. It’s peculiarity and originality scores points, as the does Sam’s humor, the mind -bending aspects, and the irony behind the book's title. The twist played out a bit too early, but I can’t complain about the way things wrapped up.

This is certainly a weird yarn, and I do warn you, it’s not for everyone. But, I’m always on the lookout for something a little off the beaten path, so overall the positives outweigh any weak spots. So, although I wrestled with my feelings about this novel, I’m going to grade on a curve this time. 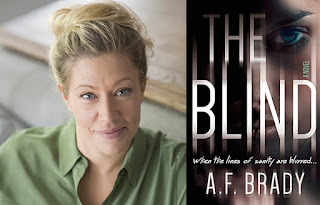 A.F. Brady is a New York State Licensed Mental Health Counselor/Psychotherapist. She holds a Bachelor's degree in Psychology from Brown University and two Masters degrees in Psychological Counseling from Columbia University. She is a New Yorker, and resides in Manhattan with her husband and their family. The Blind is her first novel.
Posted by gpangel at 1:00 AM