Joyce Carol Oates’s Wonderland Quartet comprises four remarkable novels that explore social class in America and the inner lives of young Americans. In A Garden of Earthly Delights, Oates presents one of her most memorable heroines, Clara Walpole, the beautiful daughter of Kentucky-born migrant . Desperate to rise above her haphazard existence of violence and poverty, determined not to repeat her mother’s life, Clara struggles for independence by way of her relationships with four very different men: her father, a family man turned itinerant laborer, smoldering with resentment; the mysterious Lowry, who rescues Clara as a teenager and offers her the possibility of love; Revere, a wealthy landowner who provides Clara with stability; and Swan, Clara’s son, who bears the psychological and spiritual burden of his mother’s ambition.
A masterly work from a writer with “the uncanny ability to give us a vision of her America” (National Review), A Garden of Earthly Delights is the opening stanza in what would become one of the most powerful and engrossing story arcs in literature.
A Garden of Earthly Delights is the first novel in the Wonderland Quartet. The books that complete this acclaimed series, Expensive People, them, and Wonderland, are also available from the Modern Library.

A Garden of Earthly Delights by Joyce Carol Oates
My rating: 4 of 5 stars

A Garden of Earthly Delights by Joyce Carol Oates is a 2009 Random House publication.

At some point in time, I acquired a paperback copy of ‘Expensive People’ the second book in the ‘Wonderland Quartet’. It has been sitting on my shelves for several years, but recently I have been craving something different, so I took this book down, planning to read it immediately, only to discover it was part of a quartet of books, and although no one has said it was absolutely necessary to read the books in order, to be on the safe side, I went in search of ‘A Garden of Earthly Delights’, and was relieved to discover my library had a copy.

For those unfamiliar with this critically acclaimed novel, it was originally published in 1966/67, and the author was only in her mid-twenties, at that time! Joyce Carol Oates, is a prolific writer, but her novels can take a little getting used to. Over time, I have come to enjoy her novels more than when I was younger, since I'm not a huge fan of heavy literature. But, JCO has some books that have a Gothic to them, which is what drew me to her work in the first place, but this author is also known to have a wicked sense of humor, too.

This book, however, may not be for everyone, and the younger audiences may find the characters and their backgrounds too harsh and may have a hard time relating, or coping with the author’s prose.

But, for me, I have found this author’s style of writing to be incredibly absorbing, if not shocking on occasion. The era of time and the situations described here are probably more accurate than people wish to think, or believe, especially in a time when people prefer a total rewrite of history, avoiding anything difficult, offensive, or distasteful.

The work camps during the depression were beyond harsh, the work hard, with families living in incomprehensible conditions. From such an environment, Clara was born and raised. Her father was a roughdrinking man, but he always showed Clara a certain favoritism. However, he turns on her one fateful day and hits her, causing her to run away.

It’s during this second and third part of the book that the characterizations really took shape and the story took hold of me. I can’t say I loved how it all ended up, and it is my understanding this book has undergone a major rewrite, so I can only give you my opinion of the updated version.

Clara’s character grows in leaps and bounds, takes on many different it was utterly fascinating to watch the transformation, although she still remained an enigma. Oates gives up a bird’s eye view of life, its hardships, triumphs, and tragedies. We see Clara develop from childhood, to young adult, to parenthood, to a woman totally exhausted by life. But, I did feel that she paved a way for herself, she made a life that was better than her stark beginnings could have predicted, became a strong woman, despite errors in judgment and the uncontrollable events life throws in her path.

This book is surely considered a literary classic, and although, it’s not exactly an uplifting, feel good story, and really is pretty heavy reading, I am glad I took the time to read it. 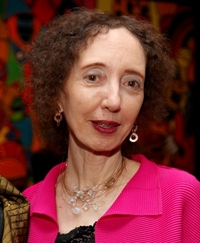 Joyce Carol Oates is a recipient of the National Book Award and the PEN/Malamud Award for Excellence in Short Fiction. She is also the recipient of the 2005 Prix Femina for The Falls. She is the Roger S. Berlind Distinguished Professor of the Humanities at Princeton University, and she has been a member of the American Academy of Arts and Letters since 1978. Pseudonyms Rosamond Smith and Lauren Kelly.
Posted by gpangel at 2:00 AM