The Western Star by Craig Johnson- Feature and Review 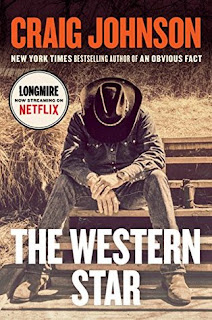 Sheriff Walt Longmire is enjoying a celebratory beer after a weapons certification at the Wyoming Law Enforcement Academy when a younger sheriff confronts him with a twenty-five armed men standing in front of a Challenger steam locomotive. It takes him back to when, fresh from the battlefields of Vietnam, then-deputy Walt accompanied his mentor Lucian to the annual Wyoming Sheriff's Association junket held on the excursion train known as the Western Star, which ran the length of Wyoming from Cheyenne to Evanston and back. Armed with his trusty Colt45 and a paperback of Agatha Christie's Murder on the Orient Express, the young Walt was ill-prepared for the machinations of twenty-four veteran sheriffs, let alone the cavalcade of curious characters that accompanied them.

The photograph—along with an upcoming parole hearing for one of the most dangerous men Walt has encountered in a lifetime of law enforcement—hurtles the sheriff into a head-on collision of past and present, placing him and everyone he cares about squarely on the tracks of runaway revenge.

The Western Star by Craig Johnson
My rating: 4 of 5 stars

The Western Star by Craig Johnson is a 2017 Viking publication.

This is the thirteenth book in the Walt Longmire series.

Walt never misses the parole hearing, which takes place every four years, for a prisoner over at Cheyenne, who happens to be the most dangerous criminal he ever encountered. This time, though, the prisoner in question is dying and seeking compassionate release. As Walt continues to oppose the release, he is taken on a trip down memory lane, back to the seventies, when he agreed to accompany Lucien to a Wyoming Sheriff’s Association junket, which was held on the excursion train called, ‘The Western Star’.


It is always a treat to check in with Walt Longmire. This installment is slightly different as it bounces between the past and the present. Butfor the most part the bulk of the story is focused on Walt’s past.

This does mean that once more a few of our very favorite characters have a much smaller role, but we do get to know Walt, a little better, and even get to hear from Martha, too.

As Walt boards the train, with twenty-four veteran Sheriffs, he could never have imagined how the events that unfolded would haunt him all these years, or how they would collide with the present in an incredible twist of fate.

In some ways, this story is like a backhanded compliment to Agatha Christie’s ‘Murder on the Orient Express’, the novel Walt carries with him aboard the train.

I thought this was a nice touch and enjoyed the tone of the story while Walt has a battle of wits with twenty-four seasoned sheriffs, and murder follows them aboard the train. Anyone familiar with Christie’s work will appreciate the homage to her techniques and how they applied to his story.

I never saw the surprise twist coming and was impressed with clever plotting, all of which was very entertaining… until the past catches up with the present. The story takes on a much more sinister tone at that point and ends with one of those awful – ‘to be continued’ storylines.

Once I finished the book, my first thought was how other devoted fans of this series would respond to this installment. I think some may have mixed feelings about it, but I thought it was a great bridge story that will segue nicely into what will most assuredly be the ultimate showdown.

I enjoyed the setting aboard the train, the ‘whodunit’ mystery, and getting a rare peek at the young Walt Longmire. I was enjoying the golden age nostalgia so much, I was ill prepared for the jolt out my reverie, dropping me back into the present with a thud. It was hard to wrap my head around how everything was tied up together, but it was pretty tense.

Overall, I enjoyed this book just as much as all the other Longmire novels, despite this being the second book in a row where key players took a backseat. But, I have a feeling, everyone will be back with a vengeance in the next installment, which promises to be one heck of a wild ride. 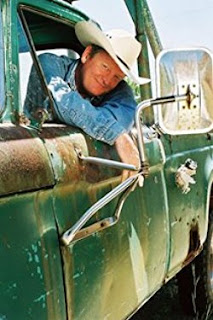 Craig Johnson is the New York Times bestselling author of twelve Walt Longmire mystery novels, which are the basis for Longmire, the hit Netflix original drama. The Cold Dish won Le Prix du Polar Nouvel Observateur/Bibliobs. Death Without Company, the Wyoming Historical Association’s Book of the Year, won France’s Le Prix 813, and Another Man’s Moccasins was the Western Writers of America’s Spur Award Winner and the Mountains & Plains Book of the Year. The Dark Horse, the fifth in the series, was a Publishers Weekly Best Book of the Year and Junkyard Dogs won The Watson Award for a mystery novel with the best sidekick. Hell Is Empty, selected by Library Journal as the Best Mystery of the Year, was a New York Times , as was As the Crow Flies, which won the Rocky for the best crime novel typifying the western United States. A Serpent’s Tooth opened as a New York Times bestseller as did Any Other Wait for Signs, Johnson's collection of short stories. Spirit of Steamboat was selected by the State Library as the inaugural One Book Wyoming and included visits to sixty-three libraries. Johnson lives in Ucross, Wyoming, population twenty-five.