Secret Lessons with the Rake by Julia Justiss- Feature and Review 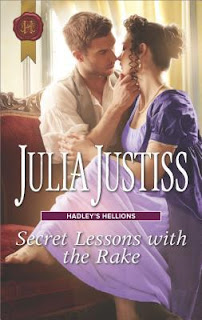 Pursuing a role in Parliament, Christopher Lattimar needs a virtuous marriage to make society overlook his roguish past. When beautiful and disarming Ellie Parmenter offers to reform and refine him, he's too tempted to say no.
Once a courtesan, Ellie knows a thing or two about polishing a diamond in the rough. She has no designs on Christopher—or any man in search of a wife—but their best-laid plans begin to tumble once lessons in respectability turn to seduction…

Secret Lessons with the Rake by Julia Justiss
My rating: 4 of 5 stars

Secret Lessons with the Rake by Julia Justiss is a 2017 Harlequin Historical publication.

I have really enjoyed this series!!

Christopher is hoping to secure a position in parliament, which has him thinking it might be time to settle down and get married. However, he has little experience in courting virtuous virgins.

Enter Ellie Parmenter, a woman who once moved within polite society until a fall from grace left her ruined.

Ellie has started a school for women to help them escape the courtesan life, which is how she meets Christopher, whose mother is a supporter of the school.

Once conversation leads to another and soon Ellie has offered to teach Christopher the fine art of wooing respectable young ladies.

But, the more time they spend together the more their desire for one another strengthens. But, Ellie knows falling for Christopher will only lead to heartbreak. She refuses to become a mistress again and Christopher can’t marry a society outcast.

While we may all feel burnout from our present day political turmoil, I have really enjoyed the political backdrop for this series, which outlines social reforms.

Ellie’s situation is so sad, and will absolutely make your blood boil. But, she’s a strong woman who has decided to turn her bad luck into something constructive, thus earning my immense respect.

Christopher may have been a bit promiscuous, but, in his heart he is a little envious of his fellow Hellions and longs for the love, companionship and family they have found. His loneliness is palpable, despite his pragmatic approach to marriage.

I enjoyed the ‘lessons’ Christopher learned, and he really was pretty charming… and a little naughty.

The story is a little angsty at times, since Ellie must cope with her unrequited feelings for Christopher, suffering moments of doubt and weakness.

But, overall this is a terrific love story, defying proper society and its staid rules. All the Hellions have found their HEA and not a single one of them were conventional, with each man standing up to society’s norms and expectations to right wrongs and overcome unreasonable barriers.

Once again, I would like to offer my appreciation to this author for writing an authentic Regency series. I've been very burned out on Regency novels and frustrated by the 'modernization' of them, but Julia keeps the storyline fresh and interesting without compromising the genre! Well done!

Here’s to ‘The Hellions’!


I highly recommend this series to all romance readers!! 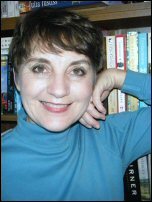 Julia Justiss grew up breathing the scent of sea air near the colonial town of Annapolis, Maryland, a fact responsible for two of her passions: sailors and history! By age was a junior tour guide for Historic Annapolis, conducting visitors on walking tours through the city that was a hotbed of revolutionary fervor. (Annapolis hosted its own tea party, dispensing with the cargo aboard the "Peggy Stewart," and was briefly capital of the United States.) She also took tourists through Annapolis's other big attraction, the United States Naval Academy. After so many years of observing future naval officers at P- and chapel, it seemed almost inevitable that she eventually married one.
But long before embarking on romantic adventures of her own, she read about them, transporting herself to such favorite venues as ancient Egypt, World War II submarine patrols, the Old South and, of course, Regency England. Soon she was keeping notebooks for jotting down story ideas. From plotting adventures for her first favorite Drew she went on to write poetry in high school and college, then worked as a business journalist doing speeches, sales promotion material and newsletter articles. After her marriage to a naval lieutenant took her overseas, she wrote the newsletter for the American Embassy in Tunis, Tunisia and traveled extensively throughout Europe. Before leaving Tunis, she fulfilled her first goal: completing a Regency novel.
Children intervened, and not until her husband left the Navy to return to his Texas homeland did she sit down to pen a second novel. The reply to her fan mail letter to a Regency author led her to Romance Writers of America. From the very first meeting, she knew she'd found a home among fellow writers--doubtless the largest group of people outside a mental institution who talk back to the voices in their heads.
Her second goal was achieved the day before her birthday in May, 1998 when Margaret Marbury of Harlequin Historicals offered to buy that second book, the Golden-Heart-Award winning novel that became THE WEDDING GAMBLE. Since then, she has gone on to write fourteen novels, three novellas and an on-line serial, along the way winning or for historical awards from The Golden Quill, the National Reader’s Choice, Romantic Times, and All About Romance’s Favorite Book of the Year.
Julia now inhabits an English Georgian-style house she and her husband built in the East Texas countryside where, if she closes her eyes and ignores the summer thermometer, she can almost imagine she inhabits the landscape of "Pride and Prejudice." In between travelling to visit her three children (a naval officer son stationed in Washington, DC, a textiles and design major daughter who cheers for University of Texas at Austin, and a mechanical engineering major son also at UT Austin) keeping up with her science teacher husband and juggling a part-time day job as a high school French teacher, she pursues her first and dearest love--crafting stories.
To relax, she enjoys watching movies, reading (historical fiction, mystery, suspense) and puttering about in the garden trying to kill off more weeds than flowers.
Posted by gpangel at 1:00 AM