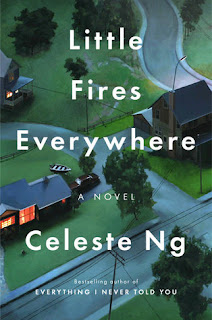 In Shaker Heights, a placid, progressive suburb of Cleveland, everything is planned - from the layout of the winding roads, to the colors of the houses, to the successful lives its residents will go on to lead. And no one embodies this spirit more than Elena Richardson, whose guiding principle is playing by the rules.
Enter Mia Warren - an enigmatic artist and single mother - who arrives in this idyllic bubble with her teenaged daughter Pearl, and rents a house from the Richardsons. Soon Mia and Pearl become more than tenants: all four Richardson children are drawn to the mother-daughter pair. But Mia carries with her a mysterious past and a disregard for the status quo that threatens to upend this carefully ordered community.
When old family friends of the Richardsons attempt to adopt a Chinese-American baby, a custody battle erupts that dramatically divides the town--and puts Mia and Elena on opposing sides. Suspicious of Mia and her motives, Elena is determined to uncover the secrets in Mia's past. But her obsession will come at unexpected and devastating costs.

Little Fires Everywhere by Celeste Ng
My rating: 5 of 5 stars

A smart, but often scathing look at entitlement coupled with the endless dynamic layers between mother and child.


The Clinton era gets a sharp examination as we drop in on Shaker Heights, an ideal suburban community with plenty of unspoken rules for its financially comfortable residents. The Richardson family is the prototype of the community, with Elena Richardson embracing the lifestyle with unparalleled enthusiasm.

‘Perfection: that was the goal, and perhaps the Shakers had it so strongly it had seeped into the soil itself, feeding those who grew up there with a propensity to overachieve and a deep intolerance for flaws.’

By contrast, Mrs. Richardson’s new tenants, Mia and her daughter, Pearl, live a free spirited, nomadic life. Mia is a photographer, who works just enough to afford the basics in life. Pearl, though, has no trouble adapting to the stable home life of the Richardson’s, practically becoming a member of the family.

Things are working out well enough, until a chain of events unlocks long buried secrets, spawning a bitter custody battle, which exposes cracks in the Richardson’s perfect image, and will culminate in a fiery inferno, both physically and metaphorically.

This second novel by Celeste Ng is not quite as grim or heavy as her debut, but it is every bit as provocative.

I have had a hard time writing this review because the layers in this story are many, with so many themes to explore. I have worked on it for days, feeling slightly intimidated, unable to find the words that would do justice to such an outstanding novel.

This book adeptly explores hot button issues prevalent twenty years ago, between episodes of Jerry Springer and Clinton’s sex scandals, when a different set of questions were raised, such as interracial adoptions.

“It came, over and over, down to this: What made someone a mother? Was it biology alone, or was it love?”

I was impressed with the various contrasts presented in the book, which included the mindset of the privileged juxtaposed against those who find themselves at their mercy. Was there an exacting price for that privilege and was it worth it? I must say, the judgmental hypocrisy is astounding!!

But, the heartbeat of the story is centered around motherhood. Every mother represented exposed that instant vulnerability motherhood creates. The pain of infertility and the frustrating process of adoption is examined right along with parental sacrifices and foibles and their consequences.

Mia and Mrs. Richardson's children also play an integral part in the story, their roles intertwined and connected in the most ironic of ways.

‘Izzy had the heart of a radical, but she had the experience of a fourteen-year-old in the suburban Midwest.’


One of the more interesting character studies is of Elena- mostly referred to as Mrs. Richardson, which I thought was a very clever way of hammering home a specific point. Her , her arrogance, and relentless reproach is extraordinary in light of what is actually taking place.

Mia, in turn, may spark a little resentfulness in Mrs. Richardson, and despite my initial puzzlement about her, and I admit I certainly questioned some of her choices, I ended up respecting her a great deal.

So, as you can see, the novel is very driven by the characters, each offering a different perspective or new avenue in which to view the situation. Sometimes I felt deep empathy for one character, feeling the acuteness of their pain, but unable to choose a side. It is often heart wrenching and I found myself feeling torn on many occasions.

On other occasions, I had a very hard time mustering up any real empathy for a few of these characters.

The plotting was very tightly woven and on several occasions, I may have uttered an expletive out loud when misunderstandings exploded in the worst possible way, creating a mountain of tension in the process.

This is a very compelling family drama, drawing out a bit of nostalgia, prompting me to take a closer look in the mirror, to put myself in the place of others before passing judgement.

But, I also picked up on a bit of sarcasm here and there, almost as if the author was scoffing at some of the attitudes or the mindset of the era, although it was done so in an understated and sly way.


It’s been nearly a week since I finished the book and I still find myself mulling over the many layers and angles, and thinking about the characters and the choices they made and how it all came together in the end.

So, it is fair to say, this book has had an impact on me, and think it is a novel anyone who appreciates a well written, thought provoking work of fiction will appreciate. Highly recommend!! 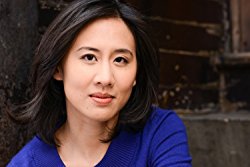 Celeste Ng grew up in Pittsburgh, Pennsylvania, and Shaker Heights, Ohio.She attended Harvard University and earned an MFA from the University ofMichigan. Her debut novel, Everything I Never Told You, won the Hopwood Award, theMassachusetts Book Award, the Asian/Pacific American Award for Literature and theALA’s Alex Award and is a 2016 NEA fellow. She lives in Cambridge, Massachusetts. To learn more about her and her work, visit her website at http://celesteng.com or follow her on Twitter: @pronounced_ing.