The Long Haul: A Trucker's Tales of Life on the Road by Finn Murphy- Feature and Review 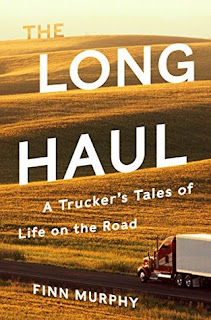 A long-haul mover’s rollicking account of life out on the Big Slab.
More than thirty years ago, Finn Murphy dropped out of college to become a long-haul trucker. Since then he’s covered more than a million miles packing, loading, and hauling people’s belongings all over America. Known by his trucker handle as , he spends his days (and many of his nights) in a 53-foot eighteen-wheeler he calls Cassidy.
In The Long Haul, Murphy offers a trucker’s-eye view of America on the move. Going far beyond the myth of the American road trip, he whisks readers down the I-95 , across the Florida Everglades, in and out of the truck stops of the Midwest, and through the steep grades of the Rocky Mountains. As he crisscrosses the country, Murphy recounts with wit, candor, and charm the America he has seen change over the decades, from the hollowing-out of small towns to changing tastes in culture and home furnishings.
Some 40 million Americans move each year, and very few have any idea what they’re getting into or the kind of person to whom they are relinquishing their worldly goods. The Long Haulis also a behind-the-scenes look at the moving industry, revealing what really happens when we call in “the movers.”
Through it all, Murphy tells poignant, funny, and often haunting stories of the people he encounters on the job: a feisty hoarder in New Hampshire; a Virginia homeowner raging when Murphy’s truck accidentally runs down a stand of trees; an ex-banker in Colorado who treats Finn and his crew with undisguised contempt; a widow who needs Murphy to bring her archeologist husband’s remains and relics to a Navajo burial ceremony in New Mexico. These experiences inspire Finn’s memorable reflections on work, class, and the bonds we form with the things we own and the places we live.
Brimming with personality and filled with great characters, The Long Haul is a resonant portrait of the enduring appeal of manual labor in the dark underbelly of the American Dream.

The Long Haul: A Trucker's Tales of Life on the Road by Finn Murphy
My rating: 5 of 5 stars

The Long Haul: A Trucker's Tales of Life on the Road by Finn Murphy is a 2017 W.W. Norton Company publication.

I wasn’t exactly sure what to expect from this book when I started reading it, but it sounded like it might be pretty interesting. I’m sure truckers see all manner of interesting things, meet a variety of different people, and have probably had their fair share of odd encounters out on the road.

So, I settled in, ready to hear some interesting tales, perhaps a few suspenseful moments of danger, and maybe a human -interest story or two, as well.

What I got, though, was so much more than that. Finn Murphy has such an honest and genuine voice and seems like he would be quite an interesting person, if I were to ever meet him in person.

I haven’t moved in over twenty years, but if I ever do relocate and employ a mover to haul my belongings from one place to another, I will remember this book, as it has given me a new -found respect for truck drivers in general and for movers in particular.

‘To put it in a nutshell, the long-haul driver is responsible for legal documents, inventory, packing cartons, loading, claim prevention, unpacking, unloading, diplomacy, human resources, and customer service. The job requires an enormous amount of physical stamina, specialized knowledge, and tact. I am, as John McPhee called it, the undisputed admiral of my fleet of one.’

Finn relates the story of his career with humor, anger, and pragmatism, but also with a keen eye and lots of heart. Finn’s tells it like it is with no holds barred, and provides a surprising insight into race relations and immigration.

Discovering the ins and outs of his business was fascinating, and because I spent my entire working life dealing with the public I could relate to some of his frustrations when it came to customer service and overblown expectations.

I admired his unapologetic approach, exposing his stubbornness, but also revealing the pride he takes in his job. If he didn’t care about his work, he wouldn’t have bothered to write this memoir or taken the time to explain to the general population how things are out there, the regulations, the dangers, the people you encounter, and the rules you must adhere to, or provide so much insight into the challenges drivers face, while debunking a few misconceptions many people may have.

This book is very informative and is certainly a learning experience, but it was also quite touching and emotional at times. I liked Finn’s style, intelligence, ethics, and straightforwardness, and I definitely admired his dedication, discipline, and loyalty.

He chose, with great care, I think, which experiences he wanted to share with the reader, and I believe he chose well.

Overall, this was an educational memoir, which was so interesting, I read it in one evening. I think it's always important to try and understand what it might be like to walk a mile in another man’s shoes. It’s so easy to take people or certain occupations for granted, or to complain about how they do things, but until you do their job, you have no idea what goes into it.

Once you hear Finn's story, and get an idea of what it might be like to make long distance hauls, or work in the moving business, you will have a much greater appreciation for the job they do!

I highly recommend this book and I think most of you will come to like Finn and respect him, and his job, a great deal! 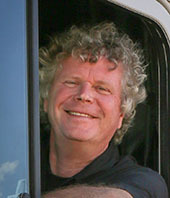 Finn Murphy grew up in Connecticut and now lives in Colorado. He started working as a long-haul trucker in 1980. The Long Haul is his first book.
Posted by gpangel at 1:00 AM