MONDAY'S MUSICAL MOMENT- Dig, if you will the Picture: The Funk, Sex, God and Genius in the Music of Prince by Ben Greenman- Feature and Review 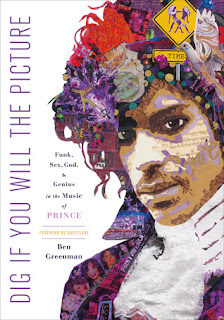 A unique and kaleidoscopic look into the life, legacy, and electricity of the pop legend Prince and his impact on our culture
Ben Greenman, New York Times bestselling author, contributing writer to the New Yorker, and of thousands of recordings of Prince and Prince-related songs, knows intimately that there has never been a rock star as vibrant, mercurial, willfully contrary, experimental, or prolific as Prince. Uniting a diverse audience while remaining singularly himself, Prince was a tireless artist, a musical virtuoso and chameleon, and a pop-culture prophet who shattered traditional ideas of race and gender, rewrote the rules of identity, and redefined the role of sex in pop music.
A polymath in his own right who collaborated with George Clinton and Questlove on their celebrated memoirs, Greenman has been listening to and writing about Prince since the mid-eighties. Here, with the passion of an obsessive fan and the skills of a critic, journalist, and novelist, he mines his encyclopedic knowledge of Prince’s music to tell both his story and the story of the paradigm-shifting ideas that he communicated to his millions of fans around the world. take on Prince is the autobiography of a generation and its ideas. Asking a series of questions--not only “Who was Prince?” but “Who wasn’t he?” and “Who are we?”--Dig if You Will the Picture is a fitting tribute to an extraordinary talent.

Dig If You Will the Picture: Funk, Sex, God and Genius in the Music of Prince by Ben Greenman
My rating: 4 of 5 stars

Dig if you Will, The Picture: Funk, Sex, God and Genius in the Music of Prince by Ben Greenman is a 2017 Henry Holt & Company publication.


‘Science-fiction authors have played around with the idea of extreme longevity and what effect it might have on the human psyche, speculating that if humans lived to be a thousand years old, they’d be so preoccupied with protecting that , that they would never even cross the street. Prince took the opposite tack, and then some.”

Before you begin reading this book, be sure to take note of these words in the title: ‘The Music of Prince’.

This is NOT a biography, but more of a fan driven homage to Prince and his music with many interesting and thought -provoking insights. However, it rarely delves too deeply into the personal life of Prince.

Having said that, it would be impossible to ignore some personal aspects, and to leave them out entirely would have been a big mistake, but, when the time came to address those issues, the author gave the least amount of information possible, and did not linger on them for long. In fact, it was almost as if it made him squirm and he wanted to gloss it over and move on as quickly as possible.

However, if you are a rabid fan- loved Prince’s music, style, fashion, and and would like to take a closer look at his musical influence and public life, this book will give you plenty to reminisce about.

For me, this book was a like skipping down memory lane. I was reminded of so many Prince moments I’d forgotten all about overtime, and discovered others I was totally unaware of.

To be honest, I liked Prince, enjoyed his music and aura, but at best, I was only a casual fan. Still who could forget the VMA when he wore those yellow ‘ pants?

Have you ever watched that awkward interview he did with Dick Clark on American Bandstand? I had not. In fact, I never even knew Prince had made an appearance on the show. You have to look that up on YouTube.


From a nostalgic standpoint, these reminders of Prince’s early career moments are fun pop culture snapshots that show how his styles and music changed and developed over the course of time.

But, this is not just a book packed with trivial ‘fan book’ facts. The author goes into deeper discussions about the themes represented in the music, as well as career highs and lows, who he was influenced by, his need for control and his battles for individuality, while maintaining a mass appeal to such an incredibly broad audience.


“One bear said,
‘Did you hear about Rustam?’
He has become famous
And travels from city to city
In a golden cage;

He preforms to hundreds of people
Who laugh and applaud
His carnival
Stunts.”

The other bear thought
A few seconds
Then started
Weeping”


This book explores song meanings, sexuality, spirituality, and race, but also highlights life on the road, performances, and Prince’s fight with recording studios and for the rights to his songs, the snafu over copyrights in the age of the internet and the integrity of his art, the importance of his privacy and how he did things, for better or worse, in the way he thought was best, and would grant him the creative license he needed.

Knowing what we know now, this book could have had a sad, melancholy tone, but it doesn’t. It steers far from the very dark and still secretive life of Prince and stays focused, as much as possible, on his music and career.

The only downside, is that in this author’s eyes, Prince could do no wrong, and so everything he did or said was given a positive spin with some excuses stretching the limits just a wee bit, and it appears that the author is still trying to wrap his head around the darker areas of his idol’s life, still clinging to that persona he has etched in his memory.

However, to this day, my favorite memory of Prince- is the Rock and Roll Hall of Fame ceremony when he joined Tom Petty on a star- studded stage and literally blew everyone away with his guitar solo in “My Guitar Gently Weeps" I am amazed. The guy was absolutely incredible.

Even though I’m not necessarily the targeted audience for this type of book, I did find enjoy the exploration of the music and the unique perspectives given .

I would recommend this book to anyone who is a big fan, for the pop culture enthusiast, or for those who might wish to take an in depth look at Prince’s art and music without it being bogged down by too much personal drama. 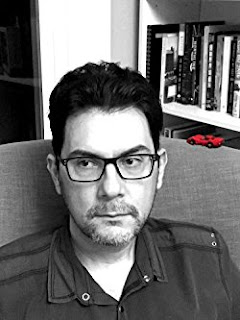 Ben Greenman is a New York Times best   bestselling author who has written both fiction and nonfiction. He is the author of several acclaimed works of fiction, including the novel The Slippage and the short-story collections What He’s Poised to Do and Superbad. He is the co-author of the Mo' Meta Blues with Questlove, the bestselling I Am Brian Wilson with Brian Wilson, Brothas Be, Yo Like George, That Funkin' Kinda Hard You? George Clinton, and more. His fiction, essays, and journalism have appeared in the New Yorker, New York Times, Washington Post, Paris Review, Zoetrope: All Story, McSweeney’s, and elsewhere, and have been widely anthologized. His most recent book If You Will The Picture, a meditation on the life and career of Prince.