FLASHBACK FRIDAY: The Sweetness at the Bottom of the Pie by Alan Bradley- Feature and Review 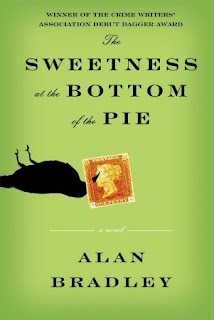 Fans of Louise Fitzhugh's iconic Harriet the Spy will welcome 11-year-old sleuth Flavia de Luce, the heroine of Canadian journalist Bradley's rollicking debut. In an early 1950s English village, Flavia is preoccupied with retaliating against her lofty older sisters when a rude, redheaded stranger arrives to confront her eccentric father, a philatelic devotee. Equally adept at quoting 18th-century works, listening at keyholes and picking locks, Flavia learns that her father, Colonel de Luce, may be involved in the suicide of his long-ago schoolmaster and the theft of a priceless stamp. The sudden expiration of the stranger in a cucumber bed, wacky village characters with ties to the schoolmaster, and a sharp inspector with doubts about the colonel and his enterprising young daughter mean complications for Flavia and enormous fun for the reader. Tantalizing hints about a gardener with a shady past and the mysterious death of Flavia's adventurous mother promise further intrigues ahead.

The Sweetness at the Bottom of the Pie by Alan Bradley
My rating: 4 of 5 stars

The Sweetness at the Bottom of the Pie by Alan Bradley is a 2009 Delacorte Press publication.

Several years back, I received a copy of the fifth book in this series for review purposes. I had no idea I was agreeing to read a YA mystery, and was slightly irritated at myself for not researching the context before agreeing to review it.

But, once I started reading it, I realized the novel had a broad appeal, and YA can simply mean the characters are young, and doesn't necessarily imply it can't be enjoyed by adults, too.

I was so impressed by the book, I vowed to look up the first four installments and catch up with the series. Well, that was three years ago, so suffice it say, I got a little distracted somewhere along the way.

But, FINALLY, I have read this first installment, which catapulted the series into the public’s consciousness.

Flavia de Luce is eleven years old in 1950 and is an aspiring chemist. Not the normal goal for young ladies in this time period, and we learn pretty early on that her entire family is a more than a little eccentric.

The mystery heats up right away after Flavia finds a body in the cucumber garden, and her father becomes the prime suspect. In order to prove her father’s innocence, Flavia must investigate a sad episode in her father’s past, which is linked to a valuable stamp.

Flavia’s first person narrative is razor sharp, and laugh out loud funny. Her adventures are tense and suspenseful, and the secondary characters add just the right amount of support, while drawing a pointedly poignant portrait of Flavia, she would rather keep hidden.

As charming as she is, Flavia is also hurting, somewhat neglected, and left to her own devices more often than not, which brought out my maternal instincts, making me wish I could give her a fierce hug and reassure her, and assuage her fears, doubts, and insecurities.

The mystery is very well done, with several twists and surprises that place Flavia in direct danger, which adds a pretty intense level of suspense to the story.

I loved the strength Flavia displays, her courage, and willingness to do what it took to help her family, which makes her a positive figure for young readers and adults alike.

Other than being a huge Harry Potter fan, and having read The Hunger Games, I have pretty much skipped over the YA phenomenon for a variety of reasons. However, this series gets my stamp of approval, so far, and I am really looking forward to Flavia’s next adventure. 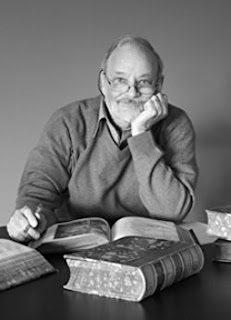 Alan Bradley received the Crime Writers' Association Debut Dagger Award for The Sweetness at the Bottom of the Pie, his first novel, which went on to win the Agatha Award, the Barry Award, the Dilys Award, the Arthur Ellis Award, the Macavity Award and the Spotted Owl Award. He is the author of many short stories, children's stories, newspaper columns, and the memoir The Shoebox Bible. He co-authored Ms. Holmes of Baker Street with the late William A.S. Sarjeant. Bradley lives in Malta with his wife and two calculating cats. His seventh Flavia de Luce mystery, "As Chimney Sweepers Come to Dust" will be published in the US and Canada on January 6, 2015, and in the UK on April 23.The first-ever Flavia short story, "The Curious Case of the Copper Corpse" has recently been published in eBook format, as has his 2006 memoir, "The Shoebox Bible".
Posted by gpangel at 1:00 AM