The Breakdown by B.A. Paris- Feature and Review 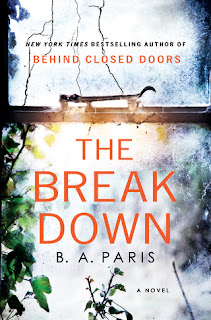 If you can’t trust yourself, who can you trust?
Cass is having a hard time since the night she saw the car in the woods, on the winding rural road, in the middle of a downpour, with the woman sitting inside―the woman who was killed. She’s been trying to put the crime out of her mind; what could she have done, really? It’s a dangerous road to be on in the middle of a storm. Her husband would be furious if he knew she’d broken her promise not to take that shortcut home. And she probably would only have been hurt herself if she’d stopped.
But since then, she’s been forgetting every little thing: where she left the car, if she took her pills, the alarm code, why she ordered a when she doesn’t have a baby.
The only thing she can’t forget is that woman, the woman she might have saved, and the terrible nagging guilt.
Or the silent she’s receiving, or the feeling that someone’s watching her…

The Breakdown by B.A. Paris
My rating: 4 of 5 stars

The Breakdown by B.A. Paris is a 2017 St. Martin’s Press publication.

Masterful and frightening tale of suspense-


It was a dark and stormy night…

No matter how cliched that sounds, nothing sets the atmosphere and tone quite like a stormy night on dark and desolate highway.

Now imagine seeing a stranded motorist, waffling on the decision to stop and offer assistance or pass on by, then ultimately deciding it was safer to drive on past, especially since the driver didn’t appear to be injured and did not indicate they wanted help.

Then imagine hearing that the person you left all alone on the side of the road was murdered. If you had stopped, would that person still be alive?

Cass had promised her husband, she would avoid taking the shortcut that night, but changed her mind. Knowing he would be furious with her for taking such a risk, and feeling like a horrible human being for ignoring the driver, she never tells anyone what she witnessed.

She can’t stop dwelling on it, though, and the guilt nearly eats her alive. But, Cass has other issues to contend with as well. She has begun to experience some serious memory lapses. With her family history, this is especially troubling.

But, for the reader, it’s a huge red flag. Does Cass have vital information locked inside her mind that could finger a killer? Well, someone is worried about Cass, because soon after the murder, she begins receiving menacing phone calls she perceives as threatening.

To cap it all off, people are having a hard time taking Cass seriously after a series of baffling occurrences have her family and friends convinced she has early onset dementia.

Unsure of her own sanity, Cass begins a slow downward spiral, fighting her losing battle with memory loss, but determined to avenge the death of the woman whose life she feels responsible for.

Anyone who has read the runaway hit ‘Behind Closed Doors’, has probably been looking forward, with great anticipation, to the second novel by this author. Expectations were high, and the excitement about the book was palpable.

But, I decided to take a more cautionary approach, concerned that the book might suffer from the dreaded ‘second book hangover’.

But, I needn’t have worried. This book might not have had the same, ‘I can’t bear to watch”, edge to it, but it definitely sucked me in and kept me glued to the pages.

I think we have all heard those stories about stopping to help a stranger whose car has broken down. It’s the perfect setup for serial killers looking for their next victim, and has been the opening for countless eerie ghost stories. As badly as you might feel for the person, would you risk your life on a dark, lonely highway in the middle of a storm, with no cell service?

The other major theme is dementia. What a horrible realization it must be to discover you are, for all intents and purposes, losing your mind. If this insidious disease runs in your family, any tiny misplaced item or forgotten appointment could trigger alarm bells.

Playing on real fears and putting the reader inside the mind of a person living through those scenarios allows us to feel their confusion, experience their doubt, and understand their anguish. But, of course, we all know, there is something truly ominous brewing, and it is not clear who can be trusted, even Cass- or especially Cass.

I picked up on a few obvious clues along the way and pieced together a close enough guess as to what might be going on, but I enjoyed watching it play out, and was satisfied by the way it was all wrapped up in the end.

The concept is not original, and has been done often enough and notoriously enough, its format has gone down in pop culture history. However, the author did a fine job of modernizing a classic and ever effective .

No, this book is not exactly like the author's debut novel, but it stands on its own merits and was a very solid psychological thriller in its own right.

GET YOUR COPY HERE:
https://www.amazon.com/Breakdown-Gripping-Thriller-Bestselling-Author-ebook/dp/B01M2BPO4O/ From a Franco/Irish background, B.A. Paris was brought up in England and moved to she spent some years working as a trader an international bank before retraining as a teacher. She still lives in France and has five daughters.
Her first book, Behind Closed Doors, is a New York Times bestseller and has been translated into 36 languages. It has also been optioned for a film. Her second novel, The Breakdown, is available now.