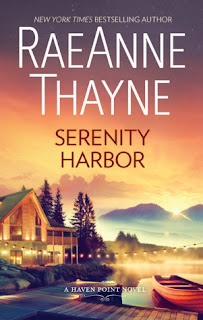 In the town of Haven Point, love can be just a wish — and one magical kiss — away…
Computer-tech millionaire Bowie Callahan is about the last person that schoolteacher Katrina Bailey wants to work for. As far as she can see, he’s arrogant, entitled and not up to the task of caring for his half brother, Milo. But is, especially if it brings her closer to her goal of adopting an orphaned little girl. And as her kindness and patience work wonders with Milo, she there’s more to sexy, wary Bo.
Bo never imagined he’d be tasked with caring for a didn’t know existed. Then again, he never pictured himself impulsively kissing vibrant, compassionate Katrina in the moonlight. Now he’s ready to make her dream of come trueand hoping there’s room in it for him, too…

Serenity Harbor by RaeAnne Thayne
My rating: 4 of 5 stars

Serenity Harbor by RaeAnne Thayne is a 2017 HQN publication.

RaeAnne Thayne has written another sweet, touching, and inspirational story that is sure to warm your heart!!

Katrina Bailey is not the same woman she was when she left home with her former boyfriend on a trip to Columbia. But, as she returns for her sister’s wedding, she has a hard time convincing her mother and best friend she is no longer the flighty, flirtatious girl she once was. She's changed and intends to prove it.

But, a chance encounter with computer-tech millionaire Bowie Callahan, catapults Katrina into a situation where her resolve is sorely tested.

Bowie recently discovered he had an autistic half-brother named Milo who has recently been orphaned after the death of their mother. He is ill equipped to cope with the situation and grabs onto the way former school teacher, Katrina Bailey was able to calm and diffuse Milo’s meltdown. He is so desperate for help, he offers her twelve thousand dollars to watch Milo until the social services autism professional arrives to work with him.

Reluctant at first, Katrina begins to see the financial advantage of helping Bowie and Milo, because of her own very special plans for her future. So, she finally agrees.

It’s not long before the couple realizes they have a strong attraction to each other, but Katrina must remain focused on her goals, which means keeping her feelings for Bowie platonic, no matter how badly she wants him.


At first, I didn’t think I would like Katrina. She was aloof, and very abrupt with Bowie and more than a little judgmental.

But, as the story progressed, I could see she really had to work hard to keep her newly acquired pragmatism in place. I began to see her as a very realistic character with very human emotions and flaws, which helped me slowly warm up to her.

Bowie was a flustered new parent, which would have been the case under any circumstances, but Milo’s autism is especially challenging. I felt sorry for him more than anything because he just seemed so lost, and unsure, and very overwhelmed, although he did seem to put his work before family in the beginning, he grew to understand where his priorities should be.

Katrina and Bowie tried to keep their feelings at bay, but love was stronger than their will to fight it, in the end, although you should be prepared for some frustration along the way.

But, the real star of the show here, is Milo! This child will worm his way into your heart and then melt it. I loved watching his progress and how through him Katrina and Bowie found one another and their happily ever after.

I enjoyed this special romance from one of my favorite contemporary romance authors, and loved getting the chance to check in with some of the characters I've met in the previous installments of this series.

Overall, this is a nice addition to the series! 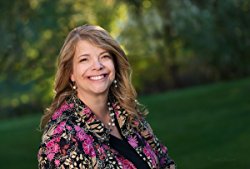 New York Times and USA Today bestselling author RaeAnne Thayne finds inspiration in the beautiful northern Utah mountains where she lives with her family. Her books have won numerous honors, including six RITA Award nominations from Romance Writers of America and a Career Achievement Award from RT Book Reviews magazine. loves to hear from readers and can be reached through her website at www.raeannethayne.com.
Posted by gpangel at 1:00 AM