Raven Rock: The Story of the U.S. Government's Secret Plan to Save Itself--While the Rest of Us Die by Garrett M. Graff- Feature and Review 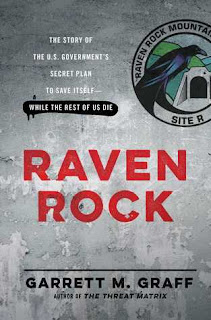 A fresh window on American history: The eye-opening truth about the government’s secret plans to survive a catastrophic attack on US soil—even if the rest of us die—a roadmap that spans from the dawn of the nuclear age to today.
Every day in Washington, DC, the blue-and-gold 1st Helicopter Squadron, “MUSSEL,” flies over the Potomac River. As obvious as the Presidential motorcade, most people assume the squadron is a travel perk for VIPs. They’re only half right: while the helicopters do provide transport, the unit exists to evacuate high-ranking officials in the event of a terrorist or nuclear attack on the capital. In the event of an attack, select officials would be whisked by helicopters to a ring of secret bunkers around Washington, even as ordinary citizens were left to fend for themselves.
For sixty years, the US government has been developing secret Doomsday plans to protect itself, and the multibillion-dollar Continuity of Government (COG) program takes numerous forms—from its plans to evacuate the Liberty Bell from Philadelphia to the plans to launch nuclear missiles from a Boeing-747 jet flying high over Nebraska. In Raven Rock, Garrett M. Graff sheds light on the inner workings of the 650-acre compound (called Raven Rock) just miles from Camp David, as well as dozens of other bunkers the government built its top leaders during the Cold War, from the White House lawn to Cheyenne Mountain in Colorado to Palm Beach, Florida, and the secret plans that would have kicked in after a Cold War nuclear attack to round up foreigners and dissidents and nationalize industries. Equal parts a presidential, military, and cultural history, Raven Rock the evolution of the government plan and the threats of global war the dawn of the nuclear era through the War on Terror.

Raven Rock: The Story of the U.S. Government's Secret Plan to Save Itself--While the Rest of Us Die by Garrett M. Graff
My rating: 4 of 5 stars

Raven Rock: The Story of the U.S. Government's Secret Plan to Save Itself--While the Rest of Us Die by Garrett M. Graff is a 2017 Simon & Schuster publication.

This is a very interesting accounting of how the United States began, during the cold war era, to take intense precautions against the possibility of a nuclear war, that would preserve the presidency, even in the wake of massive destruction.

The measures were put in place, not to save any one president, in particular, from death, but to preserve the country’s government, so that the line of power would continue.

However, it would appear, that in times of clear danger, some leaders have refused to be sent to bunkers, instead choosing to stay in the Oval office. Still, precautions are in place, and are carried out, for example, during an inauguration, or in the event of an attack, like 9/11.

This all came about, after the atom bomb was dropped and our leaders saw the damage that a nuclear attack would inflict, in one felled swoop, so to speak, and the fear that generated during the cold war.

From there the United States became nearly obsessed with saving those in power, with a distinct pecking order, even choosing which historical documents and monuments to save, and it was interesting which ones they gave top priority.

The author takes us back to the beginnings of this cold war mindset and walks us through the history and various presidencies, through near misses, to technological pros and cons, showing where we are lacking in that area, all the way up to our present -day preparing for an Armageddon type attack and its fallout.

What would our government really be like post- nuclear attack? Certainly, it would not resemble anything like what it is right now. Yet, we the people, apparently have no say in how these events would unfold.

Although, it should come as no shock, even to the most naïve person, that the government has a plan in place, and it’s not really a big secret that there are bunkers, where leaders are to be sent if an attack of that magnitude occurred. But, it is rather surprising how they plan to utilize those plans for their own survival, how they chose what to keep and what to risk, or who, for that matter. Believe it or not, immediate family might not get to enjoy total safety.

But, really, for the most part this is a historical and political accounting of how the cold war affected our mentality, which led to, instead of less nuclear power, an over -abundance of nuclear warheads, how it shaped our culture, and how that cloud still hangs over us in the way our government respond to threats.

This is an eye- opening book, interesting and informative, very detailed and well-researched. It can be a dry reading at times, though, and it did take me a little while to read this one.

I don’t know if our government, if it did have to respond to such a catastrophic event really could pull off their ‘doomsday’ strategy. There are just too many unknowns to be sure, but it would most likely depend on who was in charge at the time and how they chose to respond. I just hope we never have to find out.

At the end of the day, though, I suppose if I want to survive a nuclear attack, I better start looking into bomb shelters, because the government intends to cover themselves, and maybe certain corporations, but from there it’s every man for themselves... 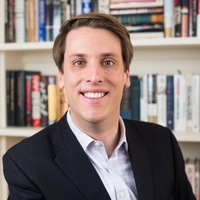 Garrett M. Graff, a distinguished magazine journalist and historian, more than a dozen years covering politics, technology, and national security. He’s written for publications from WIRED to Bloomberg BusinessWeek to the New York Times, and served as the editor of two of Washington’s most prestigious magazines, Washingtonian and POLITICO Magazine, which he helped lead to its first National Magazine Award, the industry’s highest honor. Graff is the author of multiple books, including "The First Campaign: Globalization, the Web, and the Race for the White House," which examined the role of technology in the 2008 presidential race, and "The Threat Matrix: The FBI At War," which traces the history of the FBI’s counterterrorism efforts. His next book, "Raven Rock," about the government’s Cold War Doomsday , will be published in May 2017, and he's currently on an oral history of September 11th, based on his POLITICO Magazine article, "We're The Only Plane in the Sky."His online career began with his time as Governor Howard Dean’s first webmaster, and in 2005, he was the first blogger accredited to cover a White House press briefing. Today, he serves as the executive director of the Aspen Institute’s and technology program.
Posted by gpangel at 1:00 AM