The Windfall by Diksha Basu- Feature and Review 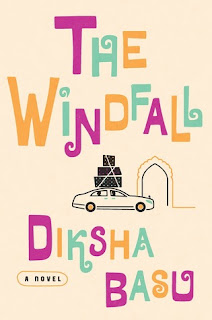 For the past thirty years, Mr. Mrs. Jha’s lives have been defined by cramped spaces, cut corners, gossipy neighbors, and the small dramas of stolen yoga pants and stale marriages. They thought they’d settled comfortably into their golden years, pleased with their son’s acceptance into an American business school. But then Mr. Jha comes into an enormous and unexpected sum of money, and moves his wife from their housing complex in East Delhi to the super-rich side of town, where he becomes eager to fit in as a man of status: skinny ties, hired guards, shoe-polishing machines, and all.
The move sets off a chain of events that rock their neighbors, their marriage, and their son, who is struggling to keep a lid on his romantic dilemmas and slipping grades, and brings unintended consequences, ultimately forcing the Jha family to reckon with what really matters..

The Windfall by Diksha Basu
My rating: 4 of 5 stars

The Windfall by Diksha Basu is a 2017 Crown publishing publication.

What a delightful tale!

Books can take you anywhere and everywhere, without leaving the comfort of your own home. I’ve been trying to incorporate more ‘cultural’ books in my reading diet, and have been loving it, but the synopsis for this book had me feeling a little nervous. I passed on the book several times, because I know so little about the manners, customs and culture of India, I was worried I wouldn’t ‘get’ the humor or understand the complexities of the novel.

But, the book just kept showing up on my radar like it was begging me to try it. So I gave up and checked it out of the library.

Naturally, you will probably enjoy this book more if you are familiar with the customs of India, but you don’t have to be an expert to get the general gist of the story.

What really sold me, was the characterizations and dialogue, which, despite my unfamiliarity with Indian culture, was hilarious and utterly charming, and pretty much spot on, when it comes to how one handles a sudden overnight accumulation of vast wealth.

The most puzzling character was the Jha’s son, Rapak, who is attending school in America. He seems to adapt well, for the most part, to America, and even has an American girlfriend, but, while he wishes to totally embrace his new life, he is still tied to the traditions and values he was raised on, which becomes such a conflict for him, he can't decide who to be, and winds up struggling with his studies and relationships. I’m not sure I liked him, especially, because he was too wishy washy and lacked depth. But, he does eventually pull his head out enough to pacify me.

One of my favorite parts of the book, features a young, childless widow, who longs to embrace life again, but is terribly lonely, wistfully dreaming of a love match. I loved the unexpected romance that develops for her which was quite lovely.

But, at the center of the story is the jarring adjustment the Jha’s must make as they leave their close- knit housing community, where everybody knows each other, (and your business), to a quiet, wealthy neighborhood. Mrs. Jha misses her friends, and does not embrace the trappings of wealth in the same way her husband does, which of course reveals much about how money has affected their marriage and individual priorities.

A bit of a competition arises between Mr. Jha and his new neighbor, Mr. Chopra, which is the best part of the story.

No matter how hard you try, or not- acquiring sudden wealth will change you to some degree. It will have an effect on your relationships, your perspectives, or even your value system. The Jha’s find that money- surprise, surprise- does not bring true contentment after all. Perhaps they had been rich all along, only didn’t appreciate it until their monumental shift in fortune begins to bring about more stress than happiness.

While cultural, gender, and social conflicts are evident in the story, the family dynamics are at the very heart of the matter. The family must work together to hold on to all that is dear, help each other through giant, swift changes in order to keep the family unit functioning, while they find a way to adapt.

There is an underlying current in the story at times, that hums alongside the hilarious one-upmanship games, which suggests that beneath the veneer of societal expectations, is a pressure cooker of tension and fear, that threatens to explode, but in this case, it ultimately dies out with a whimper instead of a roar. This approach kept the tone light, and the tension muted, which was in accordance with the atmosphere and tone of the novel, but perhaps it may have dulled the dramatic elements just a little bit.

The ending is warm and satisfying, even though the story kind of lost a little momentum there at the end for some reason, but overall, I found it to be enlightening, an easier read than I was expecting and I really enjoyed learning about New Delhi and more about Indian customs. 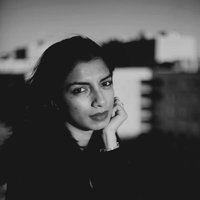 Basu is a writer and occasional actor. Originally from New Delhi, India, she holds an MFA in Creative Writing from Columbia University and now divides her time between New York City and Mumbai.
Posted by gpangel at 1:00 AM