The Lying Game by Ruth Ware- Feature and Review 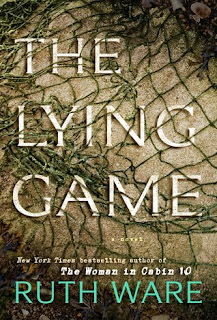 ABOUT THE BOOK:
From the instant New York Times bestselling author of blockbuster thrillers In a Dark, Dark Wood and The Woman in Cabin 10 comes Ruth Ware’s chilling new novel.
On a cool June morning, a woman is walking her dog in the idyllic coastal village of Salten along a tidal estuary known as the Reach. Before she can stop him, the dog charges into the water to retrieve what first appears to be a wayward stick, but to her horror, turns out to be something much more sinister...
The next morning, three women in and around London—Fatima, Thea, and Isabel—receive the text they had always hoped would NEVER come, from the fourth in their formerly inseparable clique, Kate, that says only, “I need you.”
The four girls were best friends at Salten, a second rate boarding school set near the cliffs of the English Channel. Each different in their own way, the four became inseparable and were notorious for playing the Lying Game, telling lies at every turn to both fellow boarders and faculty, with varying states of serious and flippant nature that were disturbing enough to ensure that everyone steered clear of them. The myriad and complicated rules of the game are strict: no lying to each other—ever. Bail on the lie when it becomes clear it is about to be found out. But their little game had consequences, and the girls were all expelled in their final year of school under mysterious circumstances surrounding the death of the school’s eccentric art teacher, Ambrose (who also happens to be Kate’s father).
Atmospheric, , and with just the right amount of chill that will keep you wrong-footed—which has now become Ruth Ware’s signature style—The Lying Game is sure to be her next big bestseller. Another unputdownable thriller from the Agatha Christie of our time.

The Lying Game by Ruth Ware
My rating: 4 of 5 stars

The Lying Game by Ruth Ware is a 2017 Gallery Scout publication.

This latest thriller, by Ruth Ware, is an all- consuming, riveting tale, full of mind games and edgy suspense.

Isabel, Kate, Fatima, and Thea became fast friends while attending Salten boarding school, as teenagers. They began ‘the lying game’ to liven up their stay at the school, garnering them a terrible reputation on campus. But, ironically, their practice of lying came in handy, when they found themselves involved in a scandal that forced them out of the school.

Now, as adults, the women have moved on with their lives the best way they can, but they all live in fear of the day they will be summoned back to Salten to answer for their crimes. That day has finally arrived. Isabel, Fatima and Thea all receive a text message from Kate-

This story is moody and atmospheric, with a heavy feeling of foreboding percolating in the background. Ware had me on edge right from the start and kept me there until I crossed the finish line.

The consequences of lying are numerous, and we all know that lies cultivate more lies. It’s a vicious cycle. But, it’s especially brutal for Isabel, Kate, Thea, and Fatima, who have all lived with their lies, precariously balanced on a precipice, knowing their dark secret could be discovered at any moment. When it looks like their worst fears are about to be realized, it forces them to polish up their lying skills once again… only this time, it’s not a game.

‘When you define yourself by walls, who’s in, who’s out. The people on the other side of the wall become, not just them, but THEM. The outsiders. The opposition. The enemy.’


Isabel is the narrator of this story, and gives an accounting of the girl’s pasts, and the events of the present that brought them back together after all these years.

“What am I coming to? I am as bad as Kate, haunted by ghosts of the past. But, I remember lying here, one night, long ago, and I have that feeling again, the record skipping in its groove, tracing and retracing the same voices and tracks.”

With her stable home life at stake, Isabel has a great deal to lose if the truth were ever exposed.
But, all the characters are complex and flawed, nervous, and jumpy, and under an equal amount of pressure. But, with their reputations preceding them, it is impossible to completely trust any of them.

“A wall, after all, isn’t just about keeping others out. It can also be for trapping people inside.’

I enjoyed the setting in this one, the guessing game, the dramas, confessions, and the surprising twists, all of which are important for any psychological thriller, but this book almost has a Gothic undertone, which of course, I found very appealing.

The suspense is mostly derived from the foreshadowing of doom, and is much more psychological than thriller, if that makes sense. Ware’s style, after only two novels, won her the moniker of ‘the Agatha Christie of our time’, but, this one may seem like a kinder, gentler version of Ware, who seems to have altered her style of writing just a little bit with this one.

This one is not quite as gritty as her previous novels have been, but I liked the more in -depth characterizations and the clever way she creates long lasting suspense that hangs in the air like a mist that refuses to burn off, becoming murkier and more intense as the story proceeds. But, never fear, there are still lots of surprises and twists that will catch you off guard.

Overall, this is another very solid performance from Ware, and I enjoyed this one, especially appreciating the tone, which is very much the style of suspense I enjoy most. 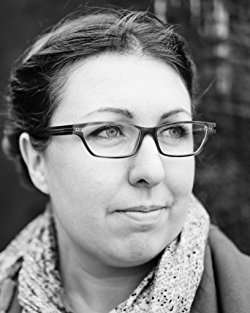 Ruth Ware grew up in Sussex, on the south coast of England. After graduating from Manchester moved to Paris, before settling in North London. She has worked as a waitress, a bookseller, a teacher of English as a foreign language and a press officer, and is the internationally bestselling author of In a Dark, Dark Wood, The Woman in Cabin 10, and the forthcoming The Lying Game (July 2017). She is married with two small children. Visit her at RuthWare.com or follow her on Twitter @RuthWareWriter.
Posted by gpangel at 1:00 AM