She Rides Shotgun by Jordan Harper- Feature and Review 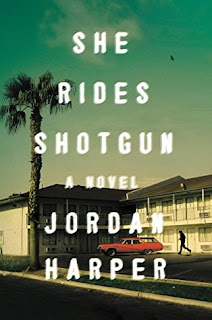 ABOUT THE BOOK:
A propulsive, gritty novel about a girl marked for death who must fight and steal to stay alive, learning from the most frightening man she knows—her father
Eleven-year-old Polly McClusky is shy, too old for the teddy bear she carries with her everywhere, when she is unexpectedly reunited with her father, Nate, fresh out of jail and driving a stolen car. He takes her from the front of her school into a world of robbery, violence, and the constant threat of death. And he does it to save her life.
Nate made dangerous enemies in prison—a gang called Aryan Steel has put out a bounty on his head, counting on its members on the outside to finish him off. They’ve already murdered his ex-wife, Polly’s mother. And Polly is their next target.
Nate and Polly’s lives soon become a series of narrow misses, of evading the bad guys and the police, of sleepless nights in motels. Out on the lam, Polly is forced to grow up early: with barely any time to mourn her mother, she must learn how to take a punch and pull off a drug-house heist. She finds herself transforming from a shy little girl into a true fighter. Nate, in turn, learns what it’s like to love fiercely and unconditionally—a love he’s never quite felt before. But can their powerful bond transcend the dangerous existence he’s carved out for them? Will they ever be able to live an honest life, free of fear?
She Rides Shotgun is a gripping and emotionally wrenching novel that upends even our -held expectations about heroes, villains, and victims. Nate takes Polly to save her life, but in the end it may very well be Polly who saves him.

She Rides Shotgun: A Novel by Jordan Harper
My rating: 5 of 5 stars

She Rides Shotgun by Jordan Harper is a 2017 Simon & Schuster publication.

This is the creed of the Ayran Steel white supremacist gang, which is run out of a prison cell by Crazy Craig Hollington, whose power and reach seemingly has no bounds.

So, when Nate, kills Craig’s brother, he is tipped off, right before his prison release, that Crazy Craig has fingered him, and has sent out orders to exact his revenge. It’s too late for Nate’s ex-girlfriend and her new boyfriend, but Nate manages to nab his eleven-year old daughter, Polly, before the ‘Steel’ manages to find her.

Thus, begins a most unusual father/ daughter road trip, chock full of adventure, danger, and gruesome criminal acts. But, Polly appears to take it all in stride- like father- like daughter, all the way down to their shared ‘gunfighter eyes.’ Although they are strangers to each other in the beginning, their connection is instantaneous, as only blood relations can be, but their bond only solidifies as they fight for their very lives.

Will they manage to make it to safety before the ‘Steel’ catches up to them, or is their fate already sealed?


I heard many good things about this book, so I had to see what all the fuss was about. I gotta tell you, this one deserves all the kudos and accolades it receives.

This book has a noir-ish atmosphere, but is a dark and gritty crime novel, that climbs into the disturbing mindset of gangs, and the price paid for living by the sword. Nate’s own background is harsh, and he doesn’t have the verbal or emotional ability to express his feelings to Polly, but in his own way, he does the best he can for her, by putting his own life on the line to save hers. But, Nate also has his own demons and ulterior motives, exposing his flawed and selfish characteristics.

However, it is most definitely Polly, who steals the spotlight in this story. She’s vulnerable, clinging to her beloved teddy bear who often speaks or communicates on her behalf, but quickly takes to her new life on the run, almost like a duck to water. She is loyal to her father, and two make quite a team.

We see Nate teaching Polly things no eleven -year old should have to know, while Polly studiously observes and even participates in things no child should ever witness, much less be allowed to ‘ride shotgun.’

Along the way, in this very unusual coming of age tale, Polly learns how to cope in an uncertain world, to stand on her own two feet, using the skills her father taught her, but also by realizing her own inner strength, and we know she’s going to be a survivor. Despite her exposure to the mentality of hardened criminals and the underbelly of society, she walks away, miraculously, with her principles in tact.

The story also has a strong supporting cast, with people playing both sides and a detective who is perhaps rooting for Nate and Polly, even while he tries to locate them.

While this is a brutal and very violent crime thriller, there is an underlying theme that centers on family connections and bonds, which are unbreakable ties, even under the most extreme circumstances.

The characterizations blew me away, the pacing is very brisk, and action packed, the dialogue is outstanding and the prose is stunning. If you enjoy crime novels, I don’t see how you could go wrong with this book. 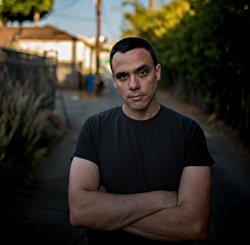 Jordan Harper was born and educated in Missouri. He's worked as an ad man, a rock critic and a writer. He currently lives in Los Angeles.