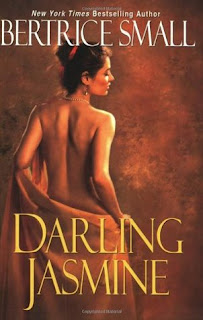 She was headstrong, fearless, and beautiful. She just like her grandmother, the legendary Skye O'Malley.
Darling Jasmine
Jasmine had been forced into marriage twice. Rebelling at King James' decree that she wed Leslie, fifth earl of Glenkirk, she fled to France with her children. But her youngest, the illegitimate offspring of Jasmine's lover, Prince Henry Stuart, is also the king's only grandson. Now the man coming after her and her little boy is the man she both fears and desires. . .
Leslie has come to France to possess Jasmine--by force if necessary. Though they shared a night of unforgettable passion, her rejection of their betrothal stunned and maddened him. Yet once he sees her again, Jemmie vows to win the elusive Jasmine back. . take her beyond ecstasy.
"Rare , heart-stopping adventure, and sizzling sensuality." --Romantic Times
The author of over thirty-five novels of historical romance and four erotic novellas, Bertrice Small is a New York Times bestselling author who has also appeared on the Publishers Weekly, USA Today, and the Los Angeles Times bestseller lists.
She is the recipient of numerous awards, including Best Historical Romance, Outstanding Historical Romance Series, Career Achievement for Historical Fantasy, and several Reviewers' Choice awards from Romantic Times BOOKclub. She has a "Silver Pen" from Affaire de Coeur, and an Honorable Mention from the West Coast Review of Books. In 2004 Bertrice was awarded a Lifetime Achievement Award by Romantic Times BOOKclub for her contributions to the historical romance genre.

Darling Jasmine by Bertrice Small
My rating: 4 of 5 stars

Darling Jasmine by Bertrice Small is a 2007 Kensington publication.

Wow! This book was certainly not what I expected and I must say I was quite shocked by the subject matter covered in this one, especially since it was originally published in 1997.

Jasmine, with the aid of her grandmother, the notorious Skye O' Malley, ran away from her fiance, Leslie, the Earl of Glenkirk, and has been in hiding for a good while, holed up with her children from previous marriages or relationships. But, the time has come to pay the piper when Leslie finally tracks her down. By this time Jemmie isn't sure if he loves Jasmine, hates her, or if he is simply doing his duty by carrying out the king's decree that they marry.

But, Jasmine senses that if she doesn't make amends and recapture Leslie's could lose her children or be stuck in a miserable marriage. So with a little help from her meddling grandmother, Jasmine and Jemmie are left alone to sort out their differences. Can Leslie tame the wild, fiercely independent Jasmine, or is it too late to rekindle their passion?

Back in February, Bertrice Small passed away, and I was saddened to see so few upon her passing. This author was way ahead of her time and one of the few who refused to back down under pressure and did not neuter her back listed titles, nor did she change the way she wrote her novels, a trailblazer all the way throughout her career.

While many would chose to give the book the moniker of 'bodice ripper', it only technically falls into that category. does not force Jasmine sexually, in fact, she is in control of the of the entire mating dance, although Jemmie is advised to sweep her way with his passions in an aggressive manner, by Skye, no less, Jasmine is quite consenting and even plans her own seduction, if you will. The only way this could be cast in the 'bodice ripper' category, comes later in the book, when a nefarious character who is into BDSM decides he wants Jasmine and plots to lure her away from Jemmie. He stalks her continuously, even when she is safely at home in Glenkirk.

Jasmine was a woman, like her grandmother, who was ahead of her time, very passionate, independent, and at times naughty. Although, she and Jemmie were not into anything kinky per , they are quite lusty, and could get rough at times, and the names they called one another in the bedroom were hardly sweet nothings or pillow talk, so they were certainly not conventional themselves. There were a few too many sex scenes in the book, and while I realize the author was all about erotica, something she built on her reputation, there weren't enough tender moments for my taste, although the couple are clearly besotted with one another.


One other thing that should be noted, is that if you decide to get into these older books, they are really a series, in the true sense of the word, meaning the stories pick up where they left off and the main character is featured in all the books in the arc, unlike today where a series simply means, the books are connected, but each one features new characters. So you will want to read these in order.


I was impressed by the boldness of the book, and liked the 'saga' quality in it, which is something we just don't see anymore. Even with the shock value, though, there were times the story lagged, but not for long.

Overall, I liked the book, the intrigue in court, the build up with and Jasmine, the suspense, and the happy ever after.

Many of Bertrice Small's back listed titles have been reissued and formatted into a digital format, so you don't have to try hunting down vintage copies. 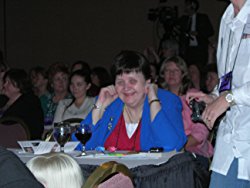 Williams was born on December 9, 1937 in Manhattan, New York City, New York, USA, the daughter of Doris S. David R. Williams, both broadcasters. She studied at Attended Western College for Women and Katharine Gibbs Secretarial School. On October 5, 1963, she married George Sumner Small, a photographer and designer with a History Major at Princeton. They had a son . She lived on eastern Long Island for over 30 years. Her greatest passions were her family; Finnegan and Sylvester, the family cats; Nicki, the elderly cockatiel who whistles the NY Mets charge call; her garden; her work, and just life in general.Published since 1947, Bertrice Small was the author of over 50 romance novels. A New York Times bestselling author, she had also appeared on other best-seller lists including Publishers Weekly, USA Today, and the L.A. Times. She was the recipient of numerous for Historical Romance; Best Historical Romance; Outstanding Historical Romance Series; Career Achievement for Historical Fantasy; a Golden Leaf from the New Jersey Romance Writers chapter of Romance Writers of America; an Author of the Year (2006) and Big Apple Award from the New York City Romance Writers chapter of RWA, and several Reviewers Choice awards from Romantic Times. She had a "Silver Pen" from Affair De Coeur, and an Honorable Mention from The West Coast Review of Books. In 2004 she was awarded a Lifetime Achievement Award by ROMANTIC TIMES magazine for her contributions to the Historical Romance genre. And in 2008 she was named by ROMANTIC TIMES along with her friends Jennifer Blake, Roberta Gellis and Janelle Taylor, a Pioneer of Romance.
Posted by gpangel at 1:00 AM