Richard Nixon: The Life by John A. Farrell- Feature and Review 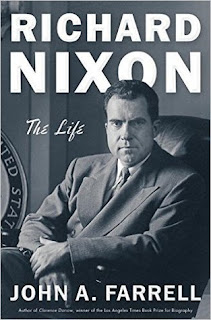 Brilliantly researched, authoritatively crafted by a biographer, and lively on the page, this is the Nixon we've been waiting for.
Richard Nixon opens with young Navy lieutenant "Nick" Nixon returning from the Pacific and setting his cap at Congress, an idealistic dreamer seeking to build a better world. Yet amid the of that now legendary 1946 campaign, Nixon's finer attributes quickly gave way to unapologetic ruthlessness. It is a stunning overture to John A. Farrell's magisterial portrait of a man who embodied postwar American cynicism.
Within four years of that first win, Nixon would be a U.S. ; in six the vice president of the United States of America. "Few came so far, so fast, and so alone," Farrell writes. , Nixon's staff was full of bright young men who devised forward-thinking reforms addressing health care, poverty, civil rights, and protection of the environment. It was a fine legacy, but Nixon cared little for it. He aspired to make his mark on the world stage instead, and his 1972 opening to China was the first great crack in the Cold War.
Nixon had another legacy, too: an America divided and polarized. It was Nixon who launched the McCarthy era, who set South against North, and who spurred the Silent Majority to despise and distrust the country's elites. He persuaded Americans to gnaw, as he did, on grievances—and to look at one another as enemies. Finally, in August 1974, after two years of the mesmerizing intrigue and scandal known as Watergate, Nixon became the only president to resign in disgrace.
Richard Nixon is an enthralling tour de force biography of our darkest president, one that reviewers will hail as a defining portrait, and the full life of Nixon have awaited

Richard Nixon: The Life by John A. Farrell
My rating: 5 of 5 stars

Nixon: The Life John A. Farrell is a 2017 Doubleday publication.

There is no shortage of books written about Nixon, with Nixon himself having written several books, published as memoirs. So, with all that material floating around, why do we need another book about Nixon, and why now?


Well, first, I think having a Nixon biography published in one book, as opposed to, say, Stephen Ambrose’s chronicles of Nixon’s life, published in three volumes, makes this biography a terrific choice. It’s enormous, with nearly eight hundred pages, but it is a very polished publication, that can be enjoyed by anyone, whether you are a novice or an aficionado.

Secondly, this book is a very comprehensive biography that does not allow Watergate to define it, so it’s not a rehash of the same old material over one period in Nixon’s life, which has been analyzed to death already, although it is covered very succinctly here.

Third, this is a new release, which means material unavailable previously, like in Ambrose’s case, has now been released, which gives us a fresh perspective on Nixon’s life.

Last, but not least, is the timing of this book’s release and the parallels to our current political climate and the nation’s polarization, which is hard to ignore.


The author has done an amazing job with this book. It’s so well organized, with some incredibly powerful passages, and covers the entirety of Nixon’s life, and lays out his slow transformation over the years, showing how, when, where and why he became the type of person and the type of leader he was.

Here are few of my musings, quotes and impressions, in no particular order:

“This Administration is going to turn away from… offbeat art, music, and literature. (Sounds eerily familiar, no?)

It wasn’t ALL Bad:

Nixon saw that an equal amount of funding went into women’s athletics.

He ended the draft, approved the lowering of the voting age, and had a surprising health care plan, which also looked pretty darned familiar and included mandated coverage and augmented public subsidies.

He did some important things for the environment- up to a point- by signing legislation to regulate pesticides and to police oceans and protect marine mammals, just to name a few.


Nixon was known for small acts of kindness, which were rarely remarked upon.
Yet, there were moments like these which reminds you of how the dark side seemed to take over completely after a time.

‘Fretting as he waited for the rain to lift and give Tricia the outdoor wedding, she hoped for, Nixon had raged, sequentially, about his enemies. It was a list that included ‘long-haired, dirty looking’ protesters; the eastern establishment, feminists; teachers’ unions; Jews, African Americans, and the ‘softies’ of the Ivy league; the ass kissers and butter uppers in the bureaucracy; and the lousy dirty… cowardly bastards in the press.’

Nixon encouraged Haldeman- the White House Chief of Staff- to enlist thugs from the Teamsters Union to beat up protesters.

‘They’ve got guys who’ll go in and knock their heads off,’ Nixon said.


‘This is the time men have to be strong, Nixon told his aides. ‘I don’t have contempt for strong men that disagree with me- like the communists. I respect them.

I have utter contempt for the so-called… intellectuals who put themselves on a high moral plane and are just weak.

In Nixon’s attempts to block the press-

“It was the duty of a free press ‘to prevent… the government from deceiving the people and sending them off to distant lands to die,’ wrote Justice Hugo Black.


“Washington is a jaundiced town. Nixon was welcomed back to the Capitol for Hubert Humphrey’s funeral in 1978, and to a state dinner honoring Deng at the Carter White House in 1979. He was visibly proud to join Ford and Carter in 1981 and represent the United States at the rites for the assassinated Anwar Sadat. The trinity inspired Senator Bob Dole’s arch description, at a Gridiron dinner, of the three former presidents as: ‘See no evil. Hear no evil. And Evil.


Overall, this was an incredibly insightful biography, very well researched and outlined. Nixon will never paint a sympathetic figure in my mind, and this book does nothing to expel that image of him. In fact, my opinion of him is still steeped in contempt, but I did get a much clearer picture of him as a man, a human being, a husband, a father, and as a politician.

I enjoyed reading about Nixon’s early political career, how the author builds Nixon’s burgeoning personality, the many ways he changed over the years, his insecurities, and sensitivities to slights which made him work harder to prove himself, yet led to his ultimate downfall.

‘What did the President know and when did he know it” - He knew it all, and he knew it all along.

This book covers several decades of politics, with many interesting tidbits I'd never heard about, leading up to the resignation of Nixon, with a short look at his life outside of politics.

After reading this book, I sat back and wondered how on earth we survived it all.

In the seventies, I was just a kid, concerned more about playground politics than Washington politics, holed up in my room applying copious amounts of blue eye shadow and strawberry lip gloss, dancing around to Casey Kasem’s top forty countdown on the FM dial. I was pretty much oblivious to most of the details back then, and had forgotten many of the details I had learned, but this seemed like a perfect time to take a measured look back at the events that shaped a nation and the man behind one of the darkest, coldest, and most corrupt administrations we experienced…. So far.

I was thankful for the author’s approach, steering clear from adding his own slant or political opinion to the book. He neither attempted to evoke a sympathetic view of Nixon, in an attempt to soften our viewpoint, nor did he ruthlessly crucify him with a disdainful tone. He didn’t attempt to take one side over the other, but presented the book as a biography should be presented- with as neutral in tone as possible. Let the facts speak for themselves and back up your information with credible sources and you will done the subject justice.

Nixon, like so many other world leaders had many, many sides to his personality. ‘Tricky Dick’ turned out to be far more interesting than I ever could have imagined and this book has left a big impression on me.

This book is perfectly presented and is a riveting, absorbing read, something that is rarely the case when reading non-fiction politics or history. 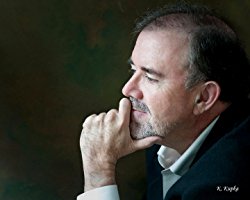 John Aloysius Farrell (www.jafarrell.com) was born and raised in Huntington, New York and suburban Washington, D.C. He graduated from the University of Virginia and embarked on a career as a newspaperman, most notably for The Denver Post and The Boston Globe. He covered every presidential campaign from 1976 through 2012, two wars and the troubles in Northern Ireland. He moved to Washington for the Globe and served as White House and congressional correspondent and Washington editor. He has also driven an ice cream truck, shined shoes, waited tables, cared for the animals in a medical laboratory, worked as a construction worker, labored on an Israeli kibbutz and served as a gallery guard at the Masters golf tournament. In 2001 he published "Tip O'Neill and the Democratic Century," a biography of the late Speaker of the won the Hardeman prize for the best book on Congress. An excerpt was included in "Pols: Great Writers on American Politicians," a 2004 anthology edited by Jack Beatty. Farrell's biography of the great American defense lawyer, "Clarence Darrow: Attorney For The Damned," won the 2012 Los Angeles Times book award for the best biography of the year. His new book, "Richard Nixon: The Life" is a biography of our most controversial president.
Posted by gpangel at 1:00 AM