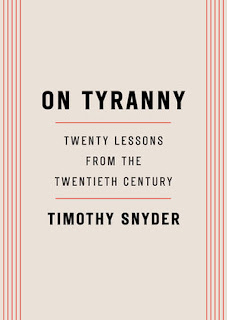 An historian of fascism offers a guide for surviving and resisting America’s turn towards authoritarianism.
On November 9th, millions of Americans woke up to the impossible: the election of Donald Trump as president. Against all predictions, one of the most-disliked presidential candidates in history had swept the electoral college, elevating a man with open contempt for democratic norms and institutions to the height of power.
Timothy Snyder is one of the most celebrated historians of the Holocaust. In his books and Black Earth, he the events and values that enabled the rise of Hitler and Stalin and the execution of their catastrophic policies. With Twenty Lessons, Snyder draws from the darkest hours of the twentieth century to provide hope for the twenty-first. As he writes, “Americans are no wiser than the Europeans who saw yield to fascism, Nazism and communism. Our one advantage is that we might learn from their experience.”
Twenty Lessons a call to arms and a guide to resistance, with invaluable ideas for how we can preserve our freedoms in the uncertain years to come.

On Tyranny: Twenty Lessons from the Twentieth Century by Timothy Snyder
My rating: 4 of 5 stars

On Tyranny: Twenty Lessons from the twentieth Century by Timothy Snyder is a 2017 Tim Duggan Books publication.

As a Professor of History at Yale University, Professor Snyder uses his expertise to lay out the importance of learning from the mistakes made throughout history, and to warn against a cavalier attitude towards the strength of our own democracy.

The author lists habits we need to develop, and continually practice, in order to protect ourselves and our country, from falling prey to tyrannical regimes. He teaches us how to pick up on subtle changes, and how to recognize the signs and symptoms of tyranny and authoritarianism. He also advises us on what to do or not to do if the worst does happen.

Naturally, the release of this book begs many people in the United States to make comparisons to our current political climate. But, the trouble isn’t simply one for America. The current trend towards nationalism will remind many of another time when “America First” was a slogan and how the isolationism the world was gripped in was the perfect set up for powerful dictators and of course, we all know how that turned out. Still, we have often believed those days are long over with, and our democracy would never again regress or weaken.

Many have used this book to make comparisons between Trump and Hitler, which the author doesn’t discourage out of hand, but, the book was not written solely for that purpose. The book teaches that democracies can fail, and how they fail, and the lessons we should learn from history and those failures.

The lessons outlined here include many habits we should form and stick to, no matter how progressive or peaceful things are in our country or with our relationships with other countries.

I personally believe our complacency in taking for granted our democracy is safe, is a dangerous attitude to adopt, under any circumstances.

I didn’t always agree with everything the author suggested. I’m an extreme introvert, so I doubt I will ever force myself to 'get out there' and 'engage in small talk'. I also enjoy social media, like Goodreads, for example, and I love technologies and the internet, so again, I doubt I will ever deliberately dial back my time spent online.

However, many of the other suggestions the author urges the reader to try, are things I already do. I don’t have cable, so mainstream media talking heads aren’t constantly infiltrating my head, which keeps those trendy catchphrases out of my vocabulary as well. I read print papers, and read lots and lots of books, which is advice I can get behind.

The author does offer up a few suggested fiction and nonfiction titles that tie into his philosophies, and I do intend to read a few of them.

I believe the author offers sound advice. If you learn the mistakes made by failed democracies, learn your history, make yourself aware, learn to think for yourself, I believe you will have equipped yourself with enough intellect and armor to make informed choices and be prepared for the worst case scenario.


“If none of us is prepared to die for freedom, then all of us will die under tyranny”

I hope people will not view this book simply as a comparison between Trump and Hitler, because while it may be difficult not to make those parallels right now, this book is one that reminds us that ‘History doesn’t repeat, but it does instruct’. It is a book that will be important, and relevant, not just for the here and now, but for all future eras of time, as well. 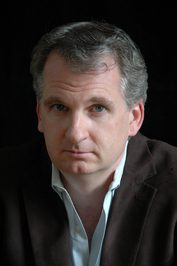 Timothy Snyder is Housum Professor of History at Yale University and a permanent fellow at the Institute for Human Sciences. He received his doctorate from the University of Oxford in 1997, where he was a British Marshall Scholar. He has held fellowships in Paris, Vienna, and Warsaw, and an Scholarship at Harvard.

His most recent book is Black Earth: The Holocaust as History and Warning, published in September 2015 by Crown Books. He is also of Bloodlands: Europe Between Hitler and Stalin (2010), a history of Nazi and Soviet mass killing on the lands between Berlin and Moscow. A New York Times bestseller and a book of the to The Atlantic, The Independent, The Financial Times, the Telegraph, and the New Statesman, it has won twelve awards including the Emerson Prize in the Humanities, a Literature Award from the American Academy of Arts and Letters, the Leipzig Award for European Understanding, and the Hannah Arendt Prize in Political Thought.

His other award-winning publications include Nationalism, Marxism, and Modern Central Europe: A Biography of Kazimierz Kelles-Krauz (1998); The Reconstruction of Nations: Poland, Ukraine, Lithuania, Belarus, 1569-1999 (2003); Sketches from a Secret War: A Polish Artist's Mission to Liberate Soviet Ukraine (2005); The Red Prince: The Secret Lives of A Habsburg Archduke (2008), and Bloodlands: Europe Between Hitler and Stalin (2010).

Snyder helped Tony Judt to compose a thematic history of political ideas and intellectuals in politics, Thinking the Twentieth Century (2012). He is also the co-editor of Stalin and Europe: Terror, War, Domination and Wall Around the West: State Power and Immigration Controls in Europe and North America (2001).

Snyder was the recipient of an inaugural Andrew Carnegie Fellowship in 2015. He is a member of the Committee on Conscience of the United States Holocaust Memorial Museum and sits on the advisory council of the Yivo Institute for Jewish Research Research.

He teaches undergraduate and graduate courses in modern East European political history.
Posted by gpangel at 1:00 AM