Make Them Pay by Allison Brennan- Feature and Review 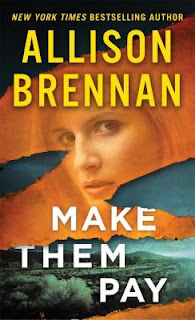 Allison Brennan's Make Them Pay, Lucy Kincaid and Sean Rogan are finally tying the knot. Two weeks before their wedding, a surprise visitor shows up at their door: Eden, Sean's estranged sister from Europe. She claims she's in town for the wedding and wants to mend fences. Lucy invites Eden to stay with them after all, family is her boss, SSA Noah Armstrong, knows far more about Eden's sketchy past than he's let on.
While Lucy is focused on her investigation tracking down dozens of children sold through illegal adoptions, Noah begins a quiet investigation of Eden and her elusive twin, Liam. He's certain that, since they're both thieves, they're here for a job or a heist. But they are up to something far more sinister than even Noah can imagine.
Liam has a score to settle with his family, and Sean has something he wants. The twins will do anything to get it including putting Lucy's life in danger. It'll take everyone Kincaids and Rogans alike to stop Liam before someone dies. Unfortunately, Liam's treachery has unforeseen consequences for Sean and Lucy, as a longtime enemy of the Rogan family hellbent on revenge sees an opportunity to make them all pay...

Make Them Pay by Allison Brennan
My rating: 5 of 5 stars

Make them Pay by Allison Brennan is a 2017 St. Martin’s Press publication.


This twelfth installment in the Lucy Kincaid series is filled with action, suspense, intrigue and family drama.

While Sean is out of town, Lucy is surprised by the sudden arrival of Sean’s estranged sister, Eden. sudden arrival, but since she is family, Lucy agrees to let Eden stay with her.

However, Lucy soon discovers, Eden is not as excited about Lucy’s upcoming wedding as she let on, instead having some serious ulterior motives behind her sisterly visit.

It would seem that Eden and her twin brother, Liam, are looking for treasure their parents commissioned them to find before their tragic deaths. Liam’s obsession, however, has caused him to rationalize criminal activity and created a deep chasm between himself and his older brother, Kane. The treasure is rumored to be cursed, and judging by the cause and effect seen here, I am inclined to agree.

However, Lucy’s worry over an illegal adoption collides with Eden and Liam’s treasure hunt, making her a pawn and putting her in the middle of a deadly situation that only Kane, Jack and Sean can save her from.

I really enjoyed this book immensely! It’s stylish, emotional, fast-paced, with a dash or romance added in for good measure. Although some characters are left rethinking their futures, I loved seeing a few long overdue happily ever after, even though the road to happiness is bittersweet.

Overall, this is a fantastic addition to an
awesome series! 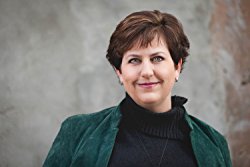 Allison Brennan is the New York Times and USA Today bestselling and award winning author of two dozen romantic thrillers and mysteries, and numerous short stories. Most recently, she was nominated for Best Paperback Original Thriller by International Thriller Writers and the Daphne du Maurier Award by Kiss of Death. A former consultant in the California State Legislature, Allison lives in northern California with her husband, five kids, and assorted pets. She's either writing, reading, playing video games, or attending her kids sporting events. Allison writes three series: the Lucy Kincaid/Sean Rogan romantic thrillers; the Maxine Revere cold case mysteries; and the Moreno & Hart Mysteries (with Laura Griffin.)Allison believes life is too short to be bored, so she had five kids and spends all her non-writing time as a spectator, chauffeur, and short-order cook for her munchkins. She has a dog, two cats, and a chicken named Gumbo. Allison and her family live in northern California.
Posted by gpangel at 1:00 AM