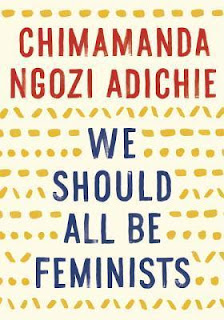 What does “feminism” mean today? That is the question at the heart of We Should All Be Feminists, a personal, eloquently-argued essay—adapted from her much-viewed TEDx talk of the same name—by Chimamanda Ngozi Adichie, the award-winning author of  and Half of a Yellow Sun.
With humor and levity, here Adichie offers readers a unique definition of feminism for the twenty-first century—one rooted in inclusion and awareness. She shines a light not only on blatant discrimination, but also the more insidious, institutional behaviors that marginalize women around the world, in order to help readers of all walks of life better understand the often masked realities of sexual politics. Throughout, she draws extensively on her own experiences—in the U.S., in her native Nigeria, and —offering an artfully nuanced explanation of why the gender divide is harmful for women and men, alike.
Argued in the same observant, witty and clever prose that has made Adichie a bestselling novelist, here is one remarkable author’s exploration of what it means to be a woman today—and an of-the-moment rallying cry for why we should all be feminists.

We Should All Be Feminists by Chimamanda Ngozi Adichie
My rating: 5 of 5 stars

We Should All Feminists by Chimamanda Ngozi Adichie is a 2014 Random House publication. I was provided a copy of this book Quarterly Literary fiction . (https://quarterly.co/products/literar...)


A thousand times I have intended to get a copy of this essay, but always got distracted before following through.

Recently, I discovered this book was both influential and inspirational to Britt Bennett, author of ‘The Mothers.’ So, with her stamp of approval added to the overwhelmingly favorable reviews posted, I finally sat down and read through this award winning essay.

This published essay is adapted from the author’s TED talk by the same name, which I haven’t seen. But the work is obviously written from the heart and although the author and I are from entirely different worlds, our thought process is exactly the same.

So, often I have lamented the lack of instruction our young men have in regards to proper behavior and treatment of women. Boys will be boys, is still so common and accepted, and yes, we must do better!!

I loved the message here, which is inspirational, but also eloquently pleads the case for feminism, dispelling that common stereotype the word conjures up for many people.

I assure you, I am not loud, shrill, or preachy, and definitely do not hate men. But, I have had to fight the same battles for equality and fair treatment over the years and can relate to the author’s arguments and personal experiences.

“If we do something over and over again, it becomes normal. If only boys are made class monitor, then at some point we will all think, at least unconsciously, that the class monitor has to be a boy.”

This is true, and can be applied to many situations in life, requiring diligence on our part to avoid becoming complacent or accepting of certain behaviors.

I could go on and on about the wisdom and insight of this essay, but I want you to read it for yourself and pass it along, not only to your daughters, but to your sons as well. 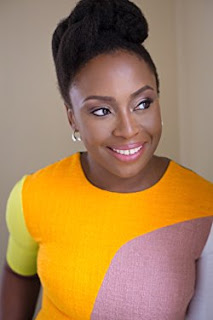 Chimamanda Ngozi Adichie is a Nigerian author. Her best known novels are Purple Hibiscus (2003), Half of a Yellow Sun (2006), and  (2013).She was born in Enugu, Nigeria, the fifth of six children to Igbo parents. She studied medicine and pharmacy at the University of Nigeria for a year and a half. At nineteen, Chimamanda left for the U.S. study communication at Drexel University in Philadelphia for two years, then went on to pursue a degree in communication and political science at Eastern Connecticut State University. Chimamanda graduated summa cum laude from Eastern in 2001, and then completed a master's degree in creative writing at Johns Hopkins University, Baltimore.It was during her senior year at Eastern that she started working on her first novel, Purple Hibiscus , which was published in October 2003. Chimamanda was a Hodder fellow at Princeton University during the 2005-2006 academic year, and earned an MA in African Studies from Yale University in 2008.
Posted by gpangel at 1:00 AM