Every Dark Corner by Karen Rose- Feature and Review 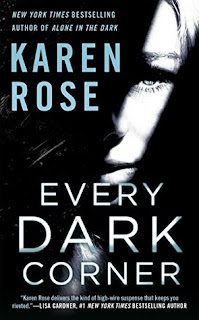 Every Dark Corner is the nail-biting new thriller from  bestseller Karen Rose, and Book 3 in the Cincinnati series, following on from Closer Than You Think and Alone in the Dark.
When FBI Special Agent Griffin "Decker" Davenport wakes from his coma, he is desperate to find the missing children he knows are in danger. At the end of his last investigation, when he thought it was all over and justice had been served, he discovered that not everyone had been rescued, but he was shot before he was able to tell anyone.
Special Agent Kate Coppola has recently moved to Cincinnati. She says she's chasing a she's actually running away from heartache. She's found the recordings from Decker's time undercover and has been at his side in the hospital while she tries to put together the pieces of the crime he was investigating—and what connection it has to his own mysterious past.
When someone tries to kill Decker in his hospital bed, he and Kate that the children are not the only ones whose lives are threatened, and that they must stop at nothing to hunt down the perpetrators. And is waiting in every dark corner.

Every Dark Corner by Karen Rose
My rating: 5 of 5 stars

Every Dark Corner by Karen Rose is a 2017 Headline publication.

This third installment in the ‘Cincinnati’ series is a continuance of the second book, with two new leads, Kate Coppola and Decker Davenport, picking up on a deeper thread resulting from the investigation that took place in the previous installment.


As the story begins, Decker is in a coma and Kate, who saved his life, has never left his side. The horrific child pornography ring that Marcus and Scarlett had uncovered runs deeper than originally thought, and becomes the first case Kate tackles in Cincinnati, where she has moved after the death of her husband and brother-in-law.

Kate and her new team have their hands full, and time is of the essence as Decker informs them there are a new group of kids in serious danger.

On a personal note, the connection Decker makes with Kate during his recovery forges a deep emotional bond between them, but both are carrying heavy burdens and secrets, that if revealed, could change the course of their relationship and end their careers in the process.


Everyone knows romantic suspense has long been my favorite genre, and Karen Rose is one of my very favorite RS authors. I have never been disappointed with her work and after reading this book, I am once again reminded of what an incredible crime author she is.

This book is a dark, gritty crime drama, with a complex plot, and super edgy suspense. It is also features deep and intense interpersonal relationships, and red-hot romance. Decker and Kate start off having a kind of mental connection with each other, which develops quickly with a breathtaking impact.

Getting inside the mind of a predator and a killer is really creepy and watching his victims fight for their lives and those around them is compelling, but had me feeling pretty agitated. The long term affect working on these sickening crimes is also examined as Kate’s team must find a way to do the job without it taking a heavy toll.

Overall, this is yet another outstanding novel by Karen Rose and is a must read for those following this particular arc. This book could be read as a stand alone, but I do recommend reading ‘Alone in the Dark’ first, if you can. I’m not sure if there will be further installments in this series or if this was a wrap. Either way, I’m totally satisfied with the outcome. 4.5 stars 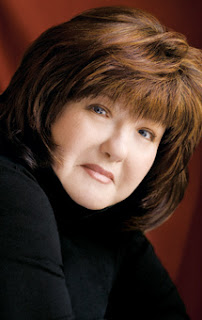 OFFICIAL WEBSITE:www.karenrosebooks.comInternationally bestselling, RITA-award winning, author Karen Rose was born and raised in the Maryland suburbs of Washington, DC. She met her husband, Martin, on a blind date when they were seventeen and after they both graduated from the University of Maryland, (Karen with a degree in Chemical Engineering) they moved to Cincinnati, Ohio. Karen worked as an engineer for a large consumer goods company, earning two patents, but as Karen says, “scenes were in my head and I couldn't concentrate on my job so I started writing them down. I started out writing for fun, and soon found I was hooked.”Her debut suspense novel, DON'T TELL, was released in July, 2003. Since then, she has published fifteen more novels and two novellas. Her seventeenth novel, ALONE IN THE DARK, will be released in 2016.Karen's books have appeared on the bestseller lists of the New York Times, USA Today, London's Sunday Times, and Germany's Spiegel (#1), and the Irish Times, as well as lists in South Africa (#1) and Australia!Her novels, I'M WATCHING YOU and SILENT SCREAM, received the Romance Writers of America's RITA award for Best Romantic Suspense for 2005 and 2011. Five of her other books have been RITA finalists. To date, her books have been translated into twenty-four languages.A former high school teacher of chemistry and physics, Karen lives in Florida with her husband of more than twenty years, her two daughters, two dogs, and a cat.
Posted by gpangel at 1:00 AM