Black Wings has my Angel by Elliot Chaze- Feature and Review 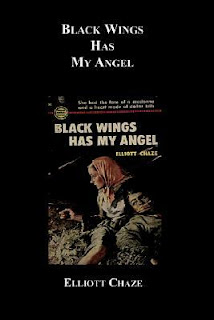 long-lost noir classic, a legend among noir buffs, is back in print for the first time in nearly half a century. The one book Black Lizard never published, it's the tale of a man after a jailbreak, who meets up with the woman of his dreams... his nightmares. Phenomenal work of the period, ranking with the best efforts of Thompson, Woolrich, Goodis et al.

Black Wings Has My Angel by Elliott Chaze
My rating: 4 of 5 stars

Black Wings has my Angel by Elliot Chaze is a NYRB Classics publication.


I ran across a post on PEN America about this book a few weeks back. It was originally published back in 1953 and is considered to be a ‘lost classic’, a book that is not necessarily well known to mainstream noir audiences, but is now considered to be one of the best crime novels written in the prime of pulp fiction. Its reputation has become almost mythic, apparently, but I had never heard of it, so as a collector and lover of noir crime novels I began to search for a copy.

So, did the book live up to its reputation?

I have to say the book is definitely a winner, even though there are some problems with the plot.

‘Tim’, after his stint in prison, plans to pull off a caper that will leave him set for life financially.
But, of course, things do not exactly work out quite the way he planned, due in part, to his having made the acquaintance of Virginia, a woman with a troubled past, who gets under his skin and quickly turns into an obsession.

After a bumpy start to their relationship, the two end up as partners in crime. The couple’s relationship is volatile, but the two flawed characters play well against each other in class noir fashion.

For fans of pulp fiction or noir this book is almost a textbook example of those genres, and may put you in mind of Jim Thompson, in some ways. It's gritty and dark, juxtaposed against a vivid scenic backdrop and occasional sprinkles of humor. It’s harsh, but has , and despite its brevity, really packs a punch.

I was amazed by the storytelling and am so glad I stumbled across it!

Elliott Chaze 1915-1990) was an old-school newspaperman who began his journalism career with the New Orleans Bureau of the Associated Press shortly before Pearl Harbor,  worked for a time AP's office after paratrooper service in world war two, and then migrated south to Mississippi, where he spent twenty years as and award-winning columnist and ten years as city editor with the American.