The Trap by Melanie Raabe- Feature and Review 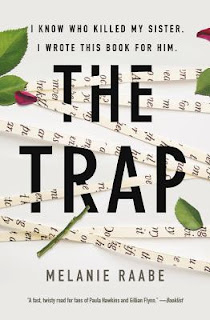 Now in paperback, a twisted debut thriller "for fans of Paula Hawkins and Gillian Flynn" (Booklist) about a reclusive author who sets the perfect trap for her sister's murderer--but is he really the killer?

The renowned author Linda Conrads famous for more than just her bestselling novels. For over eleven years, she has mystified never setting foot outside her home. Far-fetched, sometimes sinister rumors surround the shut-in writer, but they pale in comparison to the chilling truth: Linda is haunted by the unsolved murder of her younger sister, whom she discovered in a pool of blood twelve years ago, and by the face of the man she saw fleeing the scene.

Now plagued by panic attacks, Linda copes with debilitating anxiety by secluding herself in her house, her last safe haven. But the sanctity of this refuge is shattered when her sister's murderer appears again--this time on her television screen. Empowered with sudden hobbled by years of isolation, Linda resolves to use her only means of communication with the outside world--the plot of her next novel--to lay an irresistible trap for the man.

But as the plan is set in motion and the past comes rushing back, Linda's memories of that traumatic night--and her very sanity--are called into question. Is this man really a heartless killer or merely a helpless victim?

The Trap by Melanie Raabe
My rating: 4 of 5 stars

The Trap by Melanie Raabe is a 2017 Grand Central publication.

The psychological thriller has really seen a boon the past couple of years, with many debut authors finding immediate success writing books that were inevitably marketed “for fans of ‘Gone Girl’ or ‘Girl on the Train’”. But, by the end of 2016. I was ready to move on to other things, not wanting to burn myself out on one of my favorite genres.

But, when this book popped up on my radar, I couldn’t resist it.

This book was originally published in the German language and has been translated to English, by Imogen Taylor, who did an amazing job!


Linda is a reclusive author, who has not been outside of her home for years after finding her sister, Anna, murdered. Linda arrived at her sister's apartment just in time to see the murderer leaving the scene. She escaped with her life, but soon became the primary suspect.

Now, years later, Linda believes she has seen her sister’s killer on television and begins to plot an elaborate scheme to prove his guilt.

Once more I must express my irritation with the marketing ploy that unfairly compares books, by baiting readers with the - ‘for fans of…’ thing. Half the time, the suggestion is way off the mark, and it boxes the author and the book into a corner, as well as setting up unrealistic expectations for readers, which does more harm than good. (I know, you've heard this lecture before, but every time this happens, it makes me mad all over again)

This book is a victim of that type of marketing, in my opinion, because while this book is no ‘Gone Girl’,  it is a solid, clever psychological thriller and should be viewed by its own merits, and approached with an open mind, and without preconceived notions.

The suspense was intense at times, the plot twists were well timed, and although the pacing was a little unbalanced on occasion, the story never lost momentum.

The ‘story within a story’ idea is not altogether original, but it’s been a while since I’ve seen it used. It works in some places, but falls flat in others.

The story is wildly imaginative and I would warn you to toss all pretense of plausibility out the window, and just enjoy the cat and mouse game because it was truly quite enjoyable and entertaining.

I am glad I took a chance on this one. It’s a nice little gem that was enjoyable enough and I think any fan of psychological thrillers can appreciate it. 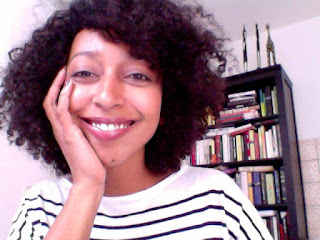 Melanie Raabe grew up in Thuringia, Germany, and attended the Ruhr University Bochum, where she specialized in media studies and literature. After graduating, she moved to Cologne to work as a journalist by day and secretly write books by night. Her novel, The Trap, won the Stuttgarter Krimipreis (Stuttgart Crime Prize) for of the year.

Imogen Taylor studied French and German at New College, Oxford and the Humboldt University in Berlin. She works as a freelance translator in Berlin. In March 2016, she was awarded the Goethe-Institut Award for New Translations.
Posted by gpangel at 1:00 AM