The Danger of Desire by Sabrina Jeffries- Spotlight Feature 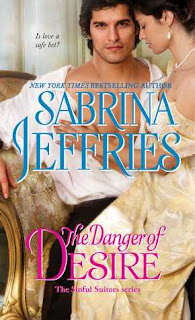 The third book in the sexy Sinful Suitors Regency romance series, this heart-pounding story shows why  bestselling author Sabrina Jeffries is one of the most beloved historical romance writers today.To root out the card cheat responsible for her brother’s death, Miss Delia Trevor spends her evenings dancing her way through high society balls, and her late nights disguised as a young man gambling her way through London’s gaming . Then one night, handsome Warren Corry, the Marquess of , a notorious member of St. George’s Club, recognizes her. When he threatens to reveal her secret, she’s determined to keep him from ruining her plans, even if it means playing a cat-and-mouse game with the enigmatic .Warren knows the danger of her game, and he refuses to watch her lose everything while gaining justice for her late brother. But when she starts to delve beneath his carefully crafted façade, can he keep her at arm’s length while still protecting her? Or will their hot desires explode into a love that transcends the secrets of their pasts?


MORE BOOKS IN THE SERIES:

THE ART OF SINNING 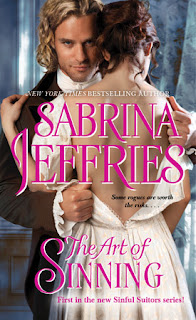 American artist Jeremy Keane refuses to return home and take over his father’s business. He’d much rather sample of beauties abroad, in search of a model for the provocative masterpiece he’s driven to paint. When he meets Lady Yvette Barlow at a London wedding, he realizes she’s perfect for his work—and determines to capture the young heiress’s defiant spirit and breathtaking sensuality on canvas.

No stranger to scandal, Yvette agrees to be Keane’s subject—in exchange for his help gaining entry to the city’s brothels he knows intimately, so she can track a missing woman and solve a family mystery. But when their practical partnership leads to lessons in the art of sinning, can they find a bold and lasting love?

THE STUDY OF SEDUCTION: 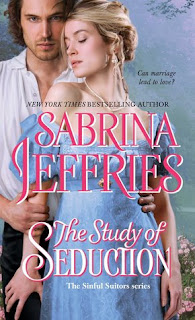 A marriage of convenience ignites into a passionate love affair in the hotly anticipated second novel in  and USA TODAY bestselling author Sabrina Jeffries’s addictive Sinful Suitors series!When Edwin Barlow, the Earl of Blakeborough, agrees to help his best friend’s impetuous ward, Lady Clarissa Lindsey, in her time of need, he knows he’s in for trouble. He’s been hunting for someone to wed, and she’ll just get in the way. Although captivated by the witty, free-spirited beauty, he fears she’d be all wrong as a wifeif she would even take such a gruff cynic for her husband. Yet he wants nothing more than to have her for his own.Clarissa has no intention of marrying anyone—not Edwin, whom she’s sure would be an overbearing husband, and certainly not the powerful French diplomat stalking her. But when matters escalate with the diplomat, she chooses Edwin’s gallant offer of a marriage between friends in hopes that it will deter her stalker. She expects nothing more than an amiable union, but their increasingly tempestuous kisses prove more than she bargained for. When her stalker’s vow to expose the lovers’ deepest secrets threatens to destroy their blossoming attraction, will their tenuous bond withstand public ruin, or will Edwin lose all that’s important to him to protect his bride?


THE PLEASURE OF PASSION: 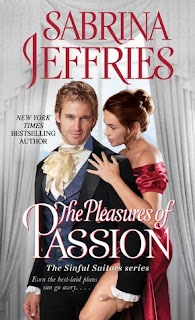 When Niall Lindsey, the Earl of Margrave, is forced to flee after killing a man in a duel, he expects his secret love, Brilliana Trevor, to go with him, or at the very least wait for him. To his shock, she does neither and sends him off with no promise for the future. Seven years and one pardon later, Niall returns to England disillusioned and cynical. And being blackmailed by the government into working with his former love to help catch a counterfeiter connected to her father doesn’t improve his mood any. But as his role as Brilliana’s fake fiancé brings his long-buried feelings to the surface once again, he wonders who is more dangerous—the counterfeiter or the woman rapidly stealing his heart.

Forced to marry another man after Niall was exiled, the now widowed Brilliana wants nothing to do with the reckless rogue who she believes abandoned her to a dreary, loveless life. So having to rely on him to save her father is the last thing she wants, much less trusts him with...But as their scheme strips away the lies and secrets of their shared past, can she let go of the old hurt and put her pride aside? Or will the pleasures of their renewed passion finally enable them both to rediscover love? 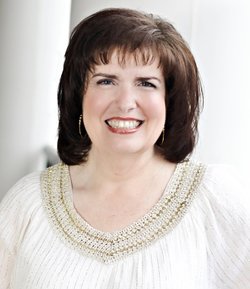 Sabrina Jeffries is the NYT bestselling author of over 50 novels and works of short fiction (some written under the pseudonyms Deborah Martin and Deborah Nicholas). Whatever time not spent writing in a coffee-fueled haze of dreams and madness is spent traveling with her husband and adult autistic son or indulging in one of her passions—jigsaw puzzles, chocolate, and music. With over 8 million books in print in 20 different languages, the North Carolina author never regrets tossing aside a budding career in academics for the sheer joy of writing fiction, and hopes that one day a book of hers will end up saving the world. She always dreams big.
Posted by gpangel at 1:00 AM