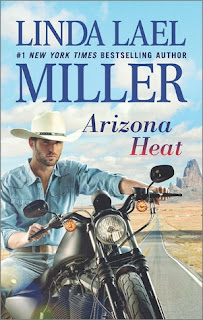 Previously published as Deadly Deceptions
Some secrets are too hot to handle
After years spent trying to remember her past, Mojo Sheepshanks just wants to put it behind her. She's finally got the life she always wanted— loves, a career that keeps her on her toes and Tucker Darroch, the handsome cop who's stuck by her against all odds. But for the people around her, moving on is hard to do. Tucker can't seem to let go of his past, while Mojo's sister Greer is being blackmailed for secrets in hers. And Mojo's stuck in the middle again.
Meanwhile, is stalking the citizens of Cave Creek, Arizona, Mojo's adopted home. And even as she and Tucker work to keep everyone safe, Mojo will discover that there are mysteries in Cave Creek that someone is willing to protect at any cost.

Arizona Heat by Linda Lael Miller
My rating: 5 of 5 stars

Arizona Heat by Linda Lael Miller is a 2017 HQN publication.

Just for the sake of clarity this is the second book in the Mojo Sheepshanks series. This two -book series has been reissued with new titles and new cover art.

I read the first book, originally titled, ‘Deadly Gamble’, several years back and loved it. However, I never got around to reading the second book. When I saw this one on Overdrive, I checked it out without even reading the description because I read everything I can by Linda Lael Miller.

But, when I realized I had the second ‘Mojo’ installment I did a happy dance!! !!

The book starts off on a very somber note, as Mojo attends the funeral of a murdered child. But, the thing is, the child’s ghost is Mojo’s constant companion and will be until her murderer is found out, something the newly minted detective is determined to discover, with or without the help of her boyfriend, Tucker.

To make matters worse, Tucker’s children were friends with the murder victim and are traumatized by her death, prompting him to move back in with this ex-wife temporarily, for the sake of his kids.


If that weren’t bad enough, Mojo’s sister is being blackmailed and her philandering brother-in-law is missing.

I am so happy Mojo is getting a little added time in the spotlight. I would love for Linda add more books to this paranormal romantic suspense series. It is so good!!

Mojo is a terrific character, strong, yet conflicted, determined, but vulnerable, but most of all she’s smart and compassionate and will eventually make a very good detective, especially if she continues to receive help from the other side.

The book is fast-paced, with a touch of screwball humor here and there, as well as a super sexy and steamy romance filled with just the right amount of conflict and angst. The story has heart and emotion as well as suspense and action.

I don’t know why the series stopped suddenly because there is lots of room for character and relationship growth and the ending did hint at future installments which really has my curiosity peaked.

You will want to pick up the first book, ‘Deadly Gamble’ published in 2006, or the newly released digital version of the book, ‘Arizona Wild’, before starting this one.

I highly recommend this series to lovers of paranormal romance and romantic suspense and maybe even to those who enjoy contemporary western romance. 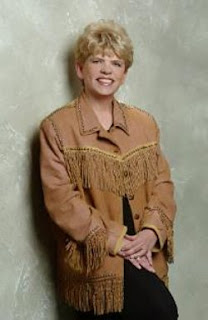 The daughter of a town marshal, LINDA LAEL MILLER is a #1 New York Times bestselling author of more than 100 historical and contemporary novels, most of which reflect her love of the West. The "First Lady of the West" lives outside Spokane, Washington, where rescued horses, dogs and cats live the high life.

Published since 1983, Linda was awarded the prestigious Nora Roberts Lifetime Achievement Award in 2007 by the Romance Writers of America. She was recently inducted into the Wild West Heritage Foundation's Walk of Fame for her dedication to preserving the heritage of the Wild West.

Hallmark Channel is developing a series based on Miller's Big Sky Country novels, published by HQN Books. In addition to writing more contemporary cowboy romances, she is working furiously on a big book Civil War series for Harlequin. When not writing, Linda loves to focus her creativity on a wide variety of art projects.

More information about Linda and her novels is available at www.lindalaelmiller.com and at www.facebook.com/OfficialLindaLaelMiller