Anatomy of a Song by Marc Myers- Feature and Review 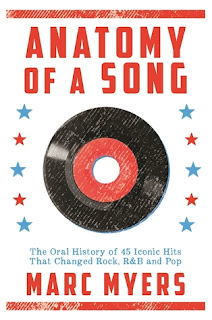 Every great song has a fascinating . In Anatomy of a Song, based on the ongoing Wall Street Journal column, writer and music historian Marc Myers brings to life five decades of music through oral histories of forty-five transformative songs woven from interviews with the artists who created them.

Bringing readers inside the making of a hit, Anatomy of a Song includes the Isley Brothers' memorable song "Shout," Led Zeppelin's "Whole Lotta Love," Janis Joplin's "Mercedes Benz," and R.E.M's "Losing My Religion." After receiving his discharge from the army in 1968, John Fogerty does a handstand and reworks Beethoven's Fifth Symphony to come up with "Proud Mary." Joni Mitchell remembers living in a cave on Crete with the "mean old daddy" who inspired her 1971 hit "Carey." Elvis Costello talks about writing "(The Angels War My) Red Shoes" in ten minutes on the train to Liverpool. And Mick Jagger, Jimmy Page, Rod Stewart, the Clash, Jimmy Cliff, Roger Waters, Stevie Wonder, Keith Richards, Cyndi Lauper, and many other leading artists reveal the emotions, inspirations, and techniques behind their influential works. Anatomy of a Song is a love letter to the songs that have defined generations of listeners.

Anatomy of a Song: The Oral History of 45 Iconic Hits That Changed Rock, R&B and Pop by Marc Myers
My rating: 4 of 5 stars


Anatomy of a Song by Marc Myers is a 2016 Grove Press publication.

I love books about music and pop culture and so I was convinced this book would be up my alley.

Sure enough, I thoroughly enjoyed this look back at some of the most iconic songs that made up the pop music landscape from the fifties all the up to the early nineties.

I didn’t know every one of these songs, but I did know most of them. Many of them I had completely forgotten about over the years. But, what really sets this book apart from others with similar formats is the backstory of each song.

The forty-five songs that are listed tell a fascinating story about how the song was written, or the way it was produced, or how it almost didn’t get recorded and what impact it had on the music scene, who influenced the writer of the song, along with personal interviews and recollections.

This is a delightful piece of nostalgia and pop culture, with carefully chosen songs, all them representing various trends and the climate of the era in which they were first recorded and became hits.

Be aware that Myers’ doesn’t always pick the most popular song by a band or performer. Instead, he goes for the most iconic or personal songs, the ones with longevity, and the ones with the best stories attached to them. I few times I scratched my head at his selections, but by and large his choices were very thoughtful, which kept the format from becoming stale.

The book is chock full of enthralling facts and stories and fun tidbits of trivia, but the interviews were my favorite part of each song featured. Some of the interviews were funny, but a few were poignant as well, revealing and various struggles along the way.

I told Alexa to play these songs for me and enjoyed listening with a new perspective, now that I know more about them.

The author did a great job of organizing the material, sticking to a chronological timeline, and there are pictures which puts names with faces if you are not familiar with the song or the performer.

I had a hard time hunting down a copy of this book, but thankfully found it on Hoopla. It was definitely worth the wait.

I found this book to be both an informative and entertaining list book, which can be enjoyed by anyone and everyone. 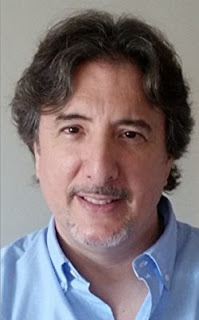 Marc Myers is a regular contributor to The Wall Street Journal, where he writes about rock, soul, and jazz, as well as the arts. He is the author of the critically acclaimed book Why Jazz Happened, and posts daily at JazzWax.com, the two-time winner of the Jazz Journalists Association’s Blog of the Year award. He can be reached at marc@marcmyers.com
Posted by gpangel at 1:00 AM