The Lost Girls by Allison Brennan- Feature and Review 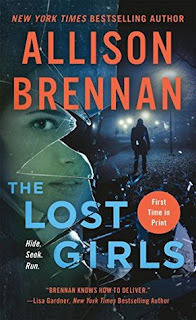 Photojournalist Siobhan Walsh has been searching for two sisters who disappeared two years ago in Mexico, so when she receives a call from a priest in Texas about an abandoned baby holding a locket with her name, she calls her friends in the FBI for help. The infant obviously belongs to one of the sisters, but how did she end up in Texas? And why did she abandon her newborn?

Lucy Kincaid and her mentor, Supervisory Special Agent Noah Armstrong, track the missing girls and uncover a human-trafficking organization that leads to a seedy underworld in which nothing is as it seems. The bad guys seem to stay two steps ahead of them, leaving behind a trail of dead bodies and Lucy with more questions than answers.

Meanwhile Lucy’s fiance Sean Rogan has a crisis of his own. An old girlfriend returns with shocking news: not only does Sean have a son, but Jesse and his step-father have disappeared. The last thing Sean wants to do is leave Lucy when she’s investigating a horrific case, but his son is in grave danger. Torn between an impossible choice, he makes a decision that has far-reaching consequences for Sean, Lucy, and everything they hold dear.

The Lost Girls by Allison Brennan
My rating: 4 of 5 stars

The Lost Girls by Allison Brennan is a 2016 St. Martin’s Press publication.


This eleventh installment in the Lucy Kincaid series is a tough, gut wrenching, and gripping crime novel.

When photojournalist, Siobhan Walsh thinks she may have gotten a lead on the two friends she’s been searching for the past two years, she calls in her FBI friend for help, introducing her to Lucy and her partner, Noah.

In the meantime, Sean gets a call from an old college flame desperately needing help locating her husband and son. Kane agrees to help Sean as they dive into the dangerous world of cartels and money laundering.


Although it seems unlikely in the beginning, Lucy and Sean’s cases merge with cataclysmic results, and had me on the edge of my seat.

This novel definitely has some dark moments while addressing sex trafficking and black market baby selling. Lucy deals with these sensitive subjects, but must manage to keep her emotions in check in the race against the clock to save the lives of Siobhan’s friends.


There are a few huge shockers in this installment

some tension between Lucy and Sean as they deal with the fallout of this emotionally draining . I do advise reading this one carefully, as there is a lot going on and the two cases do alternate back and forth and you don’t want to miss out on any nuances or small clues or details.


This is a very well written novel, with plenty of heart wrenching situations, but also intrigue, danger and suspense. I was absorbed from the start, and the story held my attention all the way through to the climactic conclusion.

The next book promises to be just as exciting, so I'm planning to be the first in line to get a copy! 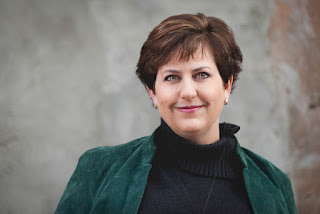 Allison has penned more than two dozen thrillers and many short stories. RT Book Reviews Allison “a master of suspense” and her books “haunting,” “mesmerizing,” “pulse-pounding” and “emotionally complex.” RT also said that "The Lucy Kincaid/Sean Rogan books are getting better and better!"

COLD SNAP, was a finalist for Best Thriller in the Thriller Awards (ITW) and FEAR NO EVIL (2007) and COMPULSION (2015) won the Daphne du Maurier award. Allison has been nominated multiple times for RWA's Best Romantic Suspense award, and the Kiss of Death's Daphne award.

Allison lives in Northern California with her husband, five children, and assorted pets. Her current release is THE LOST GIRLS, a romantic thriller. MAKE THEM PAY will be out in March, 2017
Posted by gpangel at 1:00 AM