Can these two opposites find a common ground
the love they both deserve? 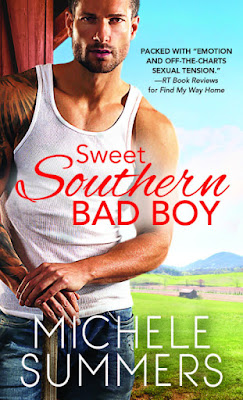 HE’S GOT SOMETHING SHE WANTS

When Katie McKnight gets lost location-scouting for her father’s TV studio, she stumbles upon the perfect setting for their new teen vampire series—a remote barn occupied by a grouchy, disheveled, and incredibly sexy man who instantly mistakes her for the new nanny. Should Katie tell him the truth, or get her foot in the door?

SHE’S GOT EVERYTHING HE NEEDS

Bestselling author Vance Kerner doesn’t just have writer’s block—he’s been run ragged ever since he was saddled with taking care of his brother’s three kids, an adopted kitten, and a runaway mutt. The last thing he needs is a teen drama defiling his property, but with fascinating and unconventional Katie the entire Kerner household, Vance is finding it harder and harder to say no.

Katie agrees to babysit, if Vance allows the film crew access to his property. Vance agrees to keep an open mind for the peace he needs to write.

But having Katie underfoot is anything but peaceful. And Vance is finding less and less time to write and more and more time to watch Katie weave a lovely spell on all the especially him.


Can these two opposites find a common ground and the love they both deserve?

“Hey, there. You from around here, are ’? I’m Clancy Perry.” Clancy stuck his hand out and Vance immediately hated the glint in his eyes.
“Katie McKnight.” She shook Clancy’s hand.
“You from Hollywood?”
“Santa Monica, technically––”
“Well, Katie McKnightI’m your man.” Clancy ambled closer to Katie, blocking Vance with his back. “And I’d like to audition for any and all love scenes. Especially if I get to make love to Carrie Underwood or Brooklyn Decker.”
“Oh, well––” Her unease was visible as she glanced at Vance.
“You don’t have to pay me or nothing. I’d do it for free. As long as the actress is ’ .” Clancy inched closer to Katie.
“Welcome to Harmony,” Vance said to Katie’s surprised or alarmed face (either would be fitting). He clapped Clancy on the shoulder over his worn Skoal T-shirt. “Look, go tell everyone not to stop by because there’s not going to be any movie. Got it?”
“That what I heard––”
“You’re hearing it now.” Clancy got that belligerent look on his face and was about to say something really stupid when Katie hooked her arm through his and steered him toward the door.
“Mr. Perry, as soon as Mr. Kerner and I have ironed out all the details, I will personally let you know if there any parts in the miniseries suited for you,” she said a goofy-smiling Clancy. “Thank you for stopping by and informing me of your availability.”
Clancy shuffled his dirty cowboy boots on the wood floor. “Sure . Maybe you and can talk over beers”––he made a suggestive leer with his tobacco-stained teeth–– “You ever ridden on the back of an ATV––”
“She’s not available.” Vance cut in as he tried shoving Clancy out the door.
“How do you know?” Clancy dug his booted heels in, halting Vance from slamming the door in his face. “You her boyfriend, you douche bag.”
“Yes, I am. Now get the hell out of here,” he snarled in Clancy’s stupefied face. “And make sure you tell your brother Clinton, too.” Vance slammed the door so hard it rattled the frame.
Katie stood with crossed arms. Pointing a finger at her disapproving face, he said, “Don’t give me that look. I a huge favor. Clancy and his brother Clinton are two characters you want to avoid. They don’t run on all four cylinders. They trim trees for a living and have fallen out of more than I can count, which explains the brain damage.”
Katie took an aggressive step forward. “I don’t care about Clancy. You promised to listen to my proposal with an open mind. And now you’re saying no before I’ve had a chance to explain.” A wrinkle creased her brow directly below her widow’s peak. “And I’m not your girlfriend, youyou !”
Unable to form a coherent thought, his pulse quickened as he stared at Katie’s flustered face and heaving chest beneath her oversized sweatshirt. “Did you just call me ?”


“Yeah. And I meant it.” Katie whirled around and stormed away. “I’m outta here. But I’m coming back tomorrow to present my proposal and you’re listen.” 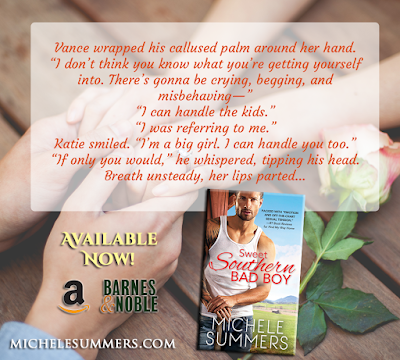 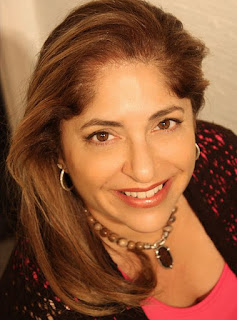 Michele Summers enjoys writing smart romances with spunky heroines, witty heroes and wacky characters, along with a satisfying happily ever after. To her thrill and delight, she has won numerous awards for her writing. When not writing, she loves her career as an interior designer and working with clients in NC and Miami where she lived for over 20 years. These days, she stays busy herding her college freshman and high school sophomore and spends a lot of time watching them compete statewide in tennis.