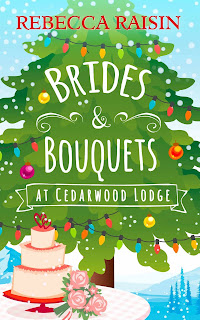 
Christmas has come to Cedarwood Lodge in the second part of the feel-good romance serial from best selling author, Rebecca Raisin!

Dreaming of a happily ever after at Cedarwood Lodge is Clio Winters’ current focus, especially with a winter wonderland wedding expo planned. But with brides coming from far and wide the heat is on for Clio to fulfil everyone’s dream of a Christmas wedding!

Lodge is a delectable romance told in three parts – following Clio journey back to her hometown of Evergreen. This is Part Two.

READ AN EXCEPRT:
After finding the key, I let myself in. The cottage was as pristine as ever. Everything in its place and a place for everything, as my Aunt Bessie used to say, good-naturedly teasing Mom’s tendency for a supreme clean.

In the kitchen, I detected the faint smell of coffee. I rifled through the pantry to find some coffee beans. The one thing Mom always had in bulk was coffee. She might run out of food without much concern, but her coffee stash was always healthy. Finding the coffee, I pressed buttons on the machine, but it came up with an error code. I frowned, pressing more buttons, wondering what the little symbols meant. Being organized to a fault, I knew Mom kept all her kitchen gadget instruction manuals in a file in the bottom drawer.

Sure enough, there was the file, just like I expected. But underneath it was a leather bound book. It was thick, embossed, and looked out of place in the drawer. Mom didn’t just leave things lying around, kitchen things went in the kitchen and personal effects went the office.

Interest piqued, I flicked it open. It was a photo album. I froze. The hair on my arms stood on end. Part fear she’d catch me looking through her private things, and part curiosity that I might find something I shouldn’t. The tiny book felt heavy in my hands, and my heart thudded in my chest. It was probably nothing, probably family photographs, and she’d mistakenly left them in this drawer.

Surely she wouldn’t mind if I had a quick peek at my own family photographs? Didn’t I have that right, the most basic of things?

I darted a glance over my shoulder, ears pricked for the sound of her car. I flicked the page, the photos were black and white. The first picture was an old car with wide fenders, probably a classic by now. The second was a woman holding a baby. Her hair was curled gently around her ears. The dimples in her cheeks, identical to ones in mine. Mom. She wore a sixties type style of dress.

What I couldn’t miss was the big, beaming smile on her face as she gazed with wonderment at the baby in her arms. Whose child was it? I’d seen a picture of myself Mom’s arms as a baby, and in that her hairstyle was different, longer, less fussy. This picture was taken a long time before I was born. Mom was shiny skinned, smooth featured like a teenager. Youthful.

I flicked to the next picture and my breath caught. It was Cedarwood. Beautiful Cedarwood like something out of an F. Scott Fitzgerald novel. The fountain out front surging water into the air, the cherubs on its base unable to catch each other for eternity. The lodge in the background, the tree-crested mountains behind. It was unmistakably the lodge, but in black and white it looked so different, so young somehow… as though the years of being abandoned had aged the old place.

The next photograph was Mom again, this time holding the hand of a toddler, her little bonneted head stared up at Mom. Who… Just then I heard the crunch of gravel as Mom pulled into the driveway. Shoot! With my pulse thrumming, I closed the album and shoved it back in the drawer and with it the file of instruction manuals.
Trying to calm the erratic of my heart, I pasted on a smile and smoothed down my hair before she came in, carrying a box of donuts. 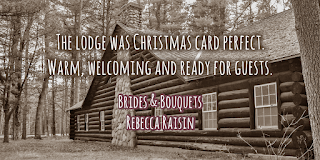 Brides and Bouquets At Cedarwood Lodge by Rebecca Raisin
My rating: 4 of 5 stars

Brides and Bouquets at Cedarwood Lodge by Rebecca Raisin is a 2016 HQ publication.

This is the second installment in the Cedarwood Lodge e-serial by Rebecca Raisin.

It’s Christmas time at Cedarwood Lodge and Clio has gotten the lodge ready to host events now and is hoping to cast the net by hosting the winter wonderland expo. She has her hands full, and of course, like Murphy’s law, what can go wrong, will go wrong. Can Clio pull everything together in time?

Although Clio’s possible love interest has left, she’s still harboring feelings for him, but she is also being pursued by her old boyfriend. However, Clio is super busy with the lodge and has plenty of heavy drama to deal with in regards to her mother’s long kept secret that involves memories of events that took place long ago at Cedarwood Lodge. Her refusal to confess to Clio is driving a deeper wedge between them. 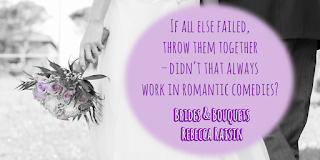 In the meantime, Amory and Cruz are going through a rough time as their original goals and plans seem to have melted away. Amory is nervous about the changes and the pressure to commit to marriage and children.

Rebecca Raisin has a knack for creating characters I want to cheer for and can relate to, as well as stories anyone can enjoy. This e-serial is a very nice idea and I’ve been really enjoying these and developments from this delightful cast of characters.

A lot of serious relationship issues crop up in this second chapter, which led to many changes. Some are awesome and I loved the curves some of the characters were brave enough to endure, and has me looking forward to the last chapter in the series with great anticipation. I can’t wait to find out how everything turns out. Naturally, I want Clio to finally get her own happily ever after, and of course I hope she and her mother can finally put the painful past behind them. The suspense is killing me! 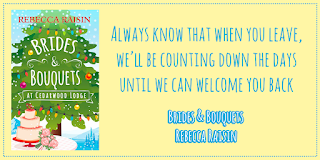 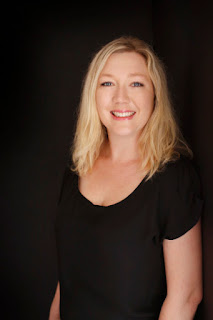