The Trespasser, by Tana French- Feature and Review 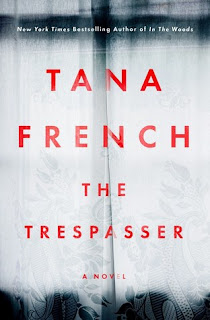 Being on the Murder squad is nothing like Detective Antoinette Conway dreamed it would be. Her partner, Stephen Moran, is the only person who seems glad she’s there. The rest of her working life is a stream of thankless cases, vicious pranks, and harassment. Antoinette is savagely tough, but she’s getting close to the breaking point.

Their new case looks like yet another by-the-numbers lovers’ quarrel gone bad. Aislinn Murray is blond, pretty, groomed to a shine, and dead in her catalogue-perfect living room, next to a table set for a romantic dinner. There’s nothing unusual about her—except that Antoinette’s seen her somewhere before.

And that her death won’t stay in its neat by- box. Other detectives are trying to push Antoinette and Steve into arresting Aislinn’s boyfriend, fast. There’s a shadowy figure at the end of Antoinette's road. friend is hinting that she knew Aislinn was in danger. And everything they find out about Aislinn takes her further from the glossy, passive doll she seemed to be.

Antoinette knows the harassment has turned her paranoid, but she can’t tell just how far gone she is. Is this case another step in the campaign to force her off the squad, or are there darker currents flowing beneath its polished surface?

The Trespasser Tana French
My rating: 5 of 5 stars

The Tana French is a 2016 Viking publication.

Antoinette Conway and her partner Steve Moran are tossed a case involving a young woman named Aislinn, whose body was found after a punch to the face caused her to fall and hit her head, killing her.

Initially believing they’ve been assigned yet another routine case, they soon find themselves burdened with , more seasoned detective, called in to help them work the case.
If that weren’t frustrating enough, they are also hounded by a dirty journalist who will stop at nothing to get the lowdown on their case.

As the pair begin to investigate, Aislinn’s boyfriend, Rory, soon becomes their prime suspect. However, Conway and Moran have a few alternate theories, they are batting around and want to hold off on arresting ‘lover boy’, to see what falls to earth after they ‘shake a few trees.’
However, the murder squad seems to be in an all fired hurry to lock Rory up and throw away the key, which raises Conway’s suspicions, but then again, she is normally suspicious and paranoid, due to the chronic harassment she is subjected to.

The only way to survive this will be to get the case solved and find out why the is so keen on pinning the murder on Rory, but with Rory falling right into their hands, and the powers that be riding their tale and playing psychological games, it will take all the interrogating skills Conway has in her whole body to uncover the truth.

When I read ‘In the Woods’ I became an instant fan of Tana French. I had never encountered a crime novel written with such a profound literary prose. From that point on, I couldn’t wait for the next book in the series to come out.

The plot is tightly woven and tense, with some of the best interrogation scenes I’ve encountered in crime fiction. I think the partnership between Conway and Moran is interesting and they seem to have a certain uneasy chemistry between them, that adds an element of tension and sizzle to the story.

" We sit there, drinking, while the stuff we should probably be saying out loud get itself done in the silence."

Conway’s internal monologues are dark and edgy, the dialogue is razor sharp, as Conway’s paranoia literally leaps off the page, but she is also darkly humorous at times, and I came away with a few chuckles and some terrific phrases and colorful metaphors to try out.

" It was about the same thing as everything else humans have done to to each other since before history began: power. It was about deciding who would be the alpha dogs and who would be at the bottom of the pile."

The pacing is one of the biggest assets in this novel, which was little longer than most thrillers, but trust me, that is a good thing! The way French baited me in, time and again, toyed with my mind, slowly luring me in, until I finally took the bait – hook, line and sinker, was like a cat and mouse game between author and reader.

The characters are so well drawn, and are given ample time to flourish, to think things out, as the case is worked like a true procedural with lots of interviews and leg work, plus the added pressure of abnormal office politics, which we all know plays a big part in police work, with everyone jockeying for position or trying to cover their own butt.

I absolutely loved this book and rank it right up there with the first novel, which has remained my personal favorite. I love gritty, hard as nails characters and deep, plots, with a climactic ending in which the irony is just divine. Simply amazing!!

After reading a Tana French novel I always feel like I’ve ingested a highly addictive drug because I immediately begin to feel withdrawal symptoms. French does not chuck out novels at the speed of light and sound, so the wait times in between releases can feel like an eternity, so be sure to enjoy and slowly savor every last drop of this novel… I know I did!! 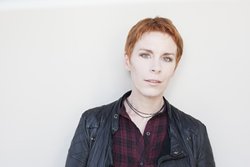 Tana French grew up in Ireland, Italy, the US and Malawi, and has lived in Dublin since 1990. She trained as a professional actress at Trinity College, Dublin, and has worked in theater, film and voice-over.
www.facebook.com/tanafrench