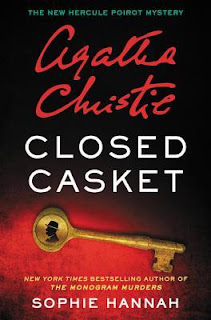 
Hercule Poirot returns in another brilliant murder mystery that can be solved only by the eponymous Belgian detective and his 'little cells'.

Lady Athelinda Playford has planned a house party at her mansion in Clonakilty, County Cork, but it is no ordinary gathering. As guests arrive, Lady Playford summons her lawyer to make an urgent change to her will - one she intends to announce at dinner that night. She has decided to cut off her two children without a penny and leave her fortune to someone who has only weeks to live....

Among Lady Playford's guests are two men she has never met - the famous Belgian detective Hercule Poirot and Inspector Edward Catchpool of Scotland Yard. Neither knows why he has been inviteduntil Poirot starts to wonder if Lady Playford expects a murderer to strike. But why does she seem so determined to provoke in the presence of a possible killer?

When the crime is committed in spite of Poirot's best efforts to stop it, and the victim is not who he expected it to be, will he be able to find the culprit and solve the mystery?

Following the phenomenal global success of The Monogram Murders, which was published to critical acclaim following a coordinated international launch in September 2014, international best-selling crime writer Sophie Hannah has been commissioned by Agatha Christie Limited to pen a second fully Poirot novel. The new audiobook marks the centenary of the creation of Christie's world-famous detective, Hercule Poirot, introduced in her first novel, The Mysterious Affair at Styles.

Closed Casket by Sophie Hannah
My rating: 4 of 5 stars

Lady Athelinda Playford gathers an eclectic group of people together when she decides to announce a major change to her will, a very controversial decision that could bring about terrible repercussions.

Inspector Edward Catchpool and the incomparable Hercule Poirot, may have been invited due to Playford’s suspicions that murder is on someone’s mind. However, a murder is committed right under the famous Belgian detective’s nose, prompting him to give those little cells some mandatory overtime.

This is the first Poirot mystery with Sophie Hannah writing as Agatha Christie that I’ve read. I must confess, the very idea of resurrecting one of my favorite detectives sounded like a marvelous idea… if we could resurrect Agatha along with him.

I was very skeptical of how this would work out, although, I have seen other long running and well loved series taken over by ghost writers work out quite well. I have also seen them crash and burn. So, with an odd mix of excitement and trepidation, I decided to give this book a fair chance.

Honestly, I enjoyed this mystery, if for no other reason than for the pleasure of reading the old tried and true whodunit format used in the golden age of detective novels.

The characters are well drawn, the dialogue is impressive, and there are plenty of interesting details and psychology involved.

While clever on many levels, it wasn’t too hard to guess who the culprit was, and Poirot is a not quite the same guy we’ve all come to know and love.

He’s not as vivid, and his arrogance and fussiness is only evident in one or two places, which are traits I always adored about him and made me chuckle.

Still, I thought the author did an admirable job considering the monumental shoes she had to fill. She makes Poirot her own and created a fun and easy mystery, while capturing the essence of a bygone era, and paying homage to it at the same time.

Overall, I had a pretty good time with this one. It makes a nice diversion from the stresses of life, and I think cozy mystery lovers would find this one to their liking as well. 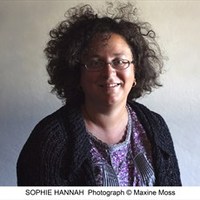 Sophie Hannah is an internationally bestselling writer of psychological crime fiction, published in 27 countries. In 2013, her latest novel, The Carrier, won the Crime Thriller of the Year Award at the Specsavers National Book Awards. Two of Sophie’s crime novels, The Point of Rescue and The Other Half Lives, have been adapted for television and appeared on ITV1 under the series title Case Sensitive in 2011 and 2012. In 2004, Sophie won first prize in the Daphne Du Maurier Festival Short Story Competition for her suspense story The Octopus Nest, which is now published in her first collection of short stories, The Fantastic Book of Everybody’s Secrets.

Sophie has also published five collections of poetry. Her fifth, Pessimism for Beginners, was shortlisted for the 2007 T S Eliot Award. Her poetry is studied at GCSE, A-level and degree level across the UK. From 1997 to 1999 she was Fellow Commoner in Creative Arts at Trinity College, Cambridge, and between 1999 and 2001 she was a fellow of Wolfson College, Oxford. She is forty-one and lives with her husband and children in Cambridge, where she is a Fellow Commoner at Lucy Cavendish College. She is currently working on a new challenge for the little cells of Hercule Poirot, Agatha Christie’s famous detective.
Posted by gpangel at 12:30 AM