Another Brooklyn by Jacqueline Woodson- Feature and Review 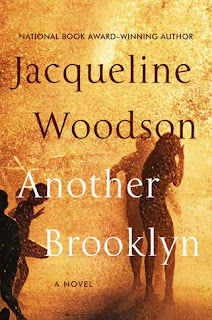 
Running into a long-ago friend sets memories from the 1970s in motion for August, transporting her to a time and a place where friendship was everything—until it wasn’t. For August and her girls, sharing confidences as they ambled through neighborhood streets, Brooklyn was a place where they believed that they were beautiful, talented, brilliant—a part of a future that belonged to them.
But beneath the hopeful veneer, there was another Brooklyn, a dangerous place where grown men reached for innocent girls in dark hallways, where ghosts haunted the night, where mothers disappeared. A world where madness just a sunset away and fathers found hope in religion.

Another Brooklyn by Jacqueline Woodson
My rating: 4 of 5 stars

Another Brooklyn by Jacqueline Woodson is a 2016 Amistad publication.

Because this author has mostly written within the young adult and middle grade genres, she has never popped up on my radar. But, when I noticed this book was a National Book Award finalist, and was creating a little buzz, I decided to take a closer look.

As I have mentioned several times before, the ‘coming of age’ trope is not one of my favorites, and this book obviously falls into that category, but the time period the book was set in, piqued my interest, and was ultimately the deciding factor for me.

Having no idea, really, what to expect, I was instantly drawn in by August’s first person narrative, and before I knew it, I had spent my entire morning reading this novel, unable to tear myself away from it.

When August, a world traveled anthropologist, returns to Brooklyn to care for her father who is dying of liver cancer, she has a brief run in with a childhood friend, which sparks a flood memories, which is at the center of his poignant coming of age tale.

In the 1973, August’s mother slips into a form of mental illness, becoming a danger to her children, prompting her father to move them away from Tennessee to Brooklyn, New York.

In the meantime, her father takes comfort from his new religious conversion to Islam as did her brother, but August finds strength and consolation from her new friends, Angela, Gigi, and Sylvia.

This story chronicles August’s life in her Bushwick area of Brooklyn in the 1970’s. The white population is fleeing the area, the Dominican Republic and Puerto Rican residents were moving in steadily, the drug problems and the extreme dangers for young girls who are always at risk for some form of sexual assault, sets the stage for what turns out to be a day to day battle, for August and her friends, who are determined to avoid the pitfalls and traps all around them to obtain their goals, dreams, and desires.

August experiences all the pains and triumphs of growing up, from first loves, tragedies, betrayals, heartbreak, teaching her important life lessons along the way, and eventually becomes the catalyst that finally breaks loose long denied truths, shaping her adult life in ways she may not have realized.

This is a poignant tale, superbly written, capturing the essence of the times, the angst of heartbreak, the troublesome aspects of mental illness, and the importance of family and friends. The sad tale, which triggers a memory within August, finally allowing her to come to terms with the realities of her life, despite her vehement denial of events that brought her family to Brooklyn in the first place. 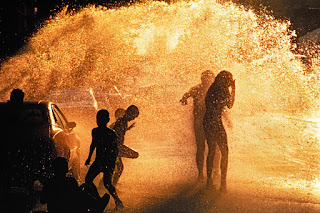 I wish had soundtracks the same way movies do, because this book has a superb 1970's soundtrackwhich I could almost hear running in the background, which was certainly fun to think back on. August’s discussion regarding memory is initially harmful for her, painful to her, turns into a comfort in time. It’s thought provoking the way the mind moves in to protect us at times, preserving those memories for a time when we’re able to cope with them better.

Although this story is often emotional, distressing, and sad, it is also, moving and stirring, but the loudest voice I heard, the deepest message I took away from this lovely, and beautifully written novel, was hope.

Overall, I am super impressed with this author and her writing skills, and can certainly understand why this novel has garnered so much praise. 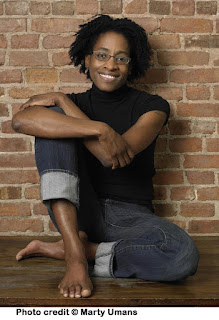 I used to say I’d be a teacher or a lawyer or a hairdresser when I grew even as I said these things, I knew what made me happiest was writing.
I wrote everything and everywhere. I remember my uncle catching me writing my name in graffiti on the side of a building. (It was not pretty for me when my mother found out.) I wrote on paper bags and my shoes and denim binders. I chalked stories across sidewalks and penciled tiny tales in notebook margins. I loved and still love watching words flower into sentences and sentences blossom into stories.
I also told a lot of stories as a child. Not “Once upon a time” basically, outright lies. I loved lying and getting away with it! There was something about telling the lie-story and seeing your friends’ eyes grow wide with wonder. Of course I got in trouble for I didn’t stop until fifth grade.
That year, I wrote a story and my teacher said “This is really good.” Before that I had written a poem about Martin Luther King that was, I guess, so good no one believed I wrote it. After lots of brouhaha, it was that I had indeed penned the poem which went on to win me a Scrabble game and local acclaim. So by the time the story rolled around and the words “This is really good” came out of the otherwise down-turned lips of my fifth grade teacher, I was well on my way to understanding that a lie on the page was a whole different animal — one that won you prizes and got surly teachers to smile. A lie on the page meant lots of independent time to create your stories and the freedom to sit hunched over the pages of your notebook without people thinking you were strange.
Lots and lots of books later, I am still surprised when I walk into a bookstore and see my name on a binder. Sometimes, when I’m sitting at my desk for long hours and nothing’s coming to me, I remember my fifth grade teacher, the way her eyes lit up when she said “This is really good.” The , I — the skinny girl in the back of the classroom who was always getting into trouble for talking or missed homework assignments — sat up a little straighter, folded my hands on the desks, smiled and began to believe in me.
Posted by gpangel at 1:00 AM