TV Horror: Investigating the Dark Side of the Small Screen by Lorna Jowett, Stacey Abbott- Feature of Review 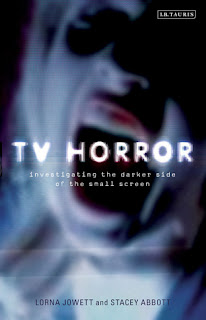 Horror is a universally popular, pervasive TV genre, with shows like True Blood, Being Human, The Walking Dead and American Horror Story a bloody splash across our television screens. This complete, utterly accessible, sometimes scary new book is the definitive work on TV horror. It shows how this most adaptable of genres has continued to be a part of the broadcast landscape, unsettling audiences and pushing the boundaries of acceptability. The authors demonstrate how TV Horror continues to provoke and terrify audiences by bringing the monstrous and the supernatural into the home, whether through adaptations of Stephen King and classic horror novels, or by reworking the gothic and surrealism in Twin Peaks and Carnivale. They uncover in mainstream television from procedural dramas to children's television and, through close analysis of landmark TV Rod Serling, Nigel Kneale, Dan Curtis and Stephen Moffat, together with case studies of such shows as Dark Shadows, Dexter, Pushing Daisies, Torchwood, and Supernatural, they explore its evolution on television. This book is a must-have for those studying TV Genre as well as for anyone with a taste for the gruesome and the macabre.

TV Horror: Investigating the Dark Side of the Small Screen by Lorna Jowett
My rating: 4 of 5 stars

TV Horror: Investigating the Dark Side of the Small Screen by Lorna Jowett, Stacey Abbott is a 2013 I.B. Tauris publication.

For Halloween, I wanted to feature a book on my blog that analyzed the horror genre either in books, movies or television. I never got around to finding a book about horror novels, I did find a few disappointing lists and breakdowns of the horror genre in films, but television?? Not a lot out there analyzing the ‘small screen’ contributions to the horror genre.

So, when I happened upon this book, I was intrigued, but cautiously optimistic.

Thankfully, I was very pleasantly surprised by this book. It’s the perfect length, covers a great deal of material without getting too caught up in opinion and minutia. In fact, this book could be used for a class paper, or for research, but it is also very entertaining, and quite interesting.

The small screen was often thought of a lesser medium compared to movies, but over time, television has evolved and is giving the movie industry a run for its money in technique, writing, and quality visual and audio effects.

When I started reading this book, I was again reminded of the groundbreaking television shows that paved the way for the stellar horror related programs we are so very addicted to today.

Naturally, ‘The Twilight Zone’ comes to mind, perhaps one the most popular anthology series ever, or at least in the fantasy, horror, or science fiction genres.

But, lesser known anthologies that garnered cult status, are also highlighted, and will have you searching old episodes of ‘Night Gallery’ or ‘Kolchak: The Night Stalker’.

But, the book doesn’t just touch on the weird, creepy, and perhaps lurid or gross aspects of the horror genre, but includes shows like ‘The Addams Family’ and ‘The Munsters’ and even expands upon some of the psychology and subtle messages these shows were sending.

One show that crops up pretty often in this book is a phenomenon that is hard to explain, even today, but its influence is still prevalent after all these years- ‘Dark Shadows’.

The show started off like a 'Jane Erye' like Gothic soap opera, which didn’t focus on the usual romances, affairs, medical dilemmas, and heavy emotional dramas daytime serials normally featured.

Instead, this serial was mysterious, with murder mysteries, and ghosts. But, it wasn’t until the role of Barnabas Collins, a tortured vampire, was created, that the show skyrocketed in popularity. Throughout its five -year run, the show featured vampires, witches, a Frankenstein monster, ghosts, time travel and werewolves.

Barnabas was to be a short term character, but when viewers saw him as reluctant villain, tortured by the monster he had become, the writers were happy to explore that thread. As a result, ‘Dark Shadows’ was the first daytime serial to have made it into pop culture history by having books, lunch boxes, posters, and a slew of other tie-in products sold during the height of its popularity.

Two feature films were made featuring the cast from the series, and the show was watched in syndication after it was cancelled. It also spawned a revival series, and is the only daytime serial to have been sold on DVD. Even today it pops in and out of pop culture and the actors are still active in keeping interest in the show alive.

Another serial that enjoyed cult status, was ‘Twin Peaks” and it too is mentioned several times in this book. This show was also groundbreaking, influential, and helped other shows gain popularity, that followed a similar style or theme.

The X- Files is also a show, that while often centered on a science fiction tone, also dealt with many paranormal elements, is often very quirky, but also sparks much conversation, and remains one the most unique paranormal shows aired on television.

The authors lead us through shows from the past, but also touched on newer, very popular shows such as ‘American Horror Story’ and of course, ‘The Walking Dead’.

But, the last chapter, touched on point I had never considered. When we sit down to watch a program on television, we are inviting these characters into our homes. Characters like Dexter walking right into our living rooms!! This, in a way, leads to a moral ambiguity, not only for the character, the monster, but the viewer as well.

This is just an example of the shows the author delves into, draws parallels to, or juxtapositions, if you will. Television has now tapped into movies seem incapable of capitalizing on or simply can't make it translate the same way it does in a series format.

In the horror genre, television has come to excel, with superb writing, imaginative plots, and even with some special effects.

Reading through this book, I was struck by how many programs that have aired over the years are paranormal in nature. Some are comical, whimsical, magical, futuristic, historical, and showcase the weird, the unexplained, the dark fascinations we harbor, our curiosity, and need to exercise our imaginations, or lose ourselves in something outside of our normal reality.

Although this book does cover a lot of ground, featuring some of the shows that have been the most powerful throughout television’s history, all the way up till the present. were a few shows left out, which is often the case with these types of books, so don't be surprised that some didn't make the cut, but I think the authors made excellent choices.

Overall, I found this book to be very informative, written with a unique approach, occasionally adding in a mashup, which kept it from becoming just another ‘list’ book, or dry reading.

I had fun with this book, especially the nostalgia, but also discovered shows I had never seen, and will definitely seek those out someday.

This is a book I recommend to horror fans, of course, but also to those who are fans of television and pop culture. 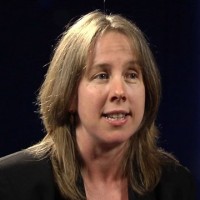 Stacey Abbott is a Reader in Film and Television at the University of Roehampton. She is the author of Celluloid Vampires (University of Texas ) and Angel: TV Milestone (Wayne State University -9), and co-author, with Lorna Jowett, of TV Horror: Investigating the Dark Side of the Small Screen (I. B. 2012). She is currently writing a book on the 21st century vampire and zombie in film and television. 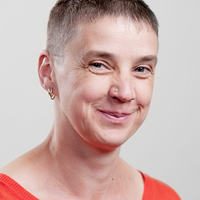