The Earl by Katharine Ashe- Feature and Review 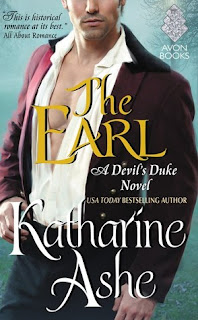 How does a bookish lady bring an arrogant lord to his knees? Entice him to Scotland, strip him of titles and riches, and make him prove what sort of man he truly is.

Handsome, wealthy, and sublimely confident, Colin Gray, the new Earl of Egremoor, has vowed to unmask the rabble-rousing pamphleteer, Lady Justice, the thorn in England’s paw. And he’ll stop at nothing.

Smart, big-hearted, and passionately dedicated to her work, Lady Justice longs to teach her nemesis a lesson in humility. But her sister is missing, and a perilous journey with her into unknown territory just might turn fierce enemies into lovers.


e moon had ceded the night to the stars when she arrived at the meeting place they had agreed upon via letter: a small ancient cemetery surrounded by a fence and hedges on a street still busy with carriages and horse traffic. A long black cloak and veil aided the dark in disguising her.
Her coachman walked beside her, a hood drawn around his face as well, but he would not accompany her to the meeting. For all his taunting, Peregrine did not frighten her. A man who dedicated his leisure time to rescuing strays was unlikely to harm a lone woman.
The cobbles shimmered with an earlier rain as she gestured for Jonah to remain across the street. Lamps lit this part of London irregularly, and the break in the wall was in shadow. Beside the gate stood an enormous man.
“Ma’am.” The behemoth bowed. “He awaits you within.”
It was immediately clear why he had suggested this place. The thick hedge within the walls created a bower of privacy and the gravestones scattered unevenly throughout made swift escape impossible.
He had staged the situation to his advantage too. He stood among the stones not four yards away, a lamp on the ground behind him casting him in silhouette. He was tall, and the breadth of his shoulders and solid stance suggested a man of fine physical conditioning. The night was mild and he wore no hat or overcoat—nothing to disguise him.
He was entirely willing for her to know his true identity.
The gate creaked closed behind her.
“Good evening, madam,” he said into the darkness. “It is a pleasure to finally make your acquaintance. I have looked forward to this moment for years. But, of course, you already know that.” His voice was smooth and low, far from menacing, rather intimate, and shockingly, unbelievably, horribly familiar.
Only hours earlier this elegant voice had proposed marriage to her.


“I am Gray,” he said. “Now remove that veil and tell me your name.”
THE EARL-  MOOD BOARD 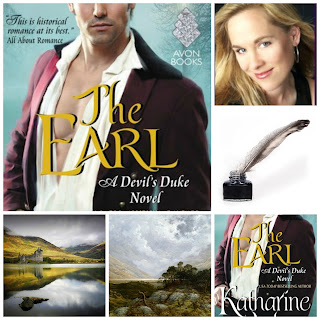 The Earl by Katharine Ashe
My rating: 5 of 5 stars

The Earl by Katharine Ashe is a 2016 Avon publication.


“But if I was fearless, could I be your reckless friend?
And if I was helpless, could be the one comes ’ in?


The showdown we have all been waiting for!

Lady Justice meets Peregrine after many salty, flirty, sharp, and witty written exchanges published for all to see.

The circumstances, though, are less than ideal.

As the Falcon Club comes to an end, the leader, Peregrine, aka Colin Gray buries his father, and become the reigning Earl of Egremoor. When his arch enemy, Lady Justice asked for help in finding her missing sister, Colin agrees. When he finally stands face to face with his arch enemy, he refuses to believe ‘Lady Justice’ is a woman, having thought it was a man he had been sparring with all this time.

Emily, the ‘bookish’ “Lady Vale, is worried about her sister, who has seemingly disappeared. When she heads out to Scotland to find her, she meets up with Colin Gray, a man she has hated for the past eighteen years. The two become victims of mistaken identity and find themselves on the run.

Thus, begins their journey, where Colin and Emily trade barbs, bicker, argue, and debate, while encountering danger and intrigue. They also discover the special pulse that beat between them as children is still throbbing steadily, but the deep pain Emily feels, which is masked by fierce and passionate resentment, and Colin’s arrogant about what caused this deep fissure, prevents forgiveness and healing.

Will the imposters be found? What will happen when Colin discovers Lady Justice’s true identity? Can the enemies call a truce? Forgive each other? Become friends, lovers?

This story is the perfect ending for the Falcon Club. While Emily may seem difficult, stubborn, and maybe even a little shrewish, the WHOLE story comes out in the end and explains so much about her behavior, her passion, and how big her heart really is. I liked Emily, actually. She feels things deeply, sticks to her convictions, and despite the price she pays for that, she holds her head up and exhibits courage and strength.

Colin’s story is heartbreaking, and his equally stubborn countenance is the result of his upbringing by a man that is publicly praised and considered a ‘great man’, but behind closed doors is a cold, hard man who raised his son in this same vein, with Colin aspiring to also become a ‘great man’ just like his father.


“A great man is not measured by the strength of his privilege, but by the depth of his heart.”

This novel is full of the contradictions and juxtapositions men and women often face and struggle with. I think Emily represents that conflict women by exposing both sides of the coin.

Colin and Emily are full of palpable pain, both believe they are in the right, believing in their cause, and what they feel is right. Both need to give and take, both must face their own hypocrisy and flaws, admit to them, learn from them, and let go of long held resentments, forgive and allow love to permeate and heal.

“A man is only as noble as his honesty”

This a powerful love story, albeit unconventional, which is exactly what I loved the most about it. The emotions are raw and real, stripping the protagonists bare, exposing their most hidden places, and igniting a fiery passion while reigniting their long buried feelings of love for one another.

Katherine Ashe is a force, unafraid to address the vulnerabilities behind the strength we have within ourselves.

Overall, this is an awesome story, full of adventure, passion, and romance, but also full of depth, with interesting character studies added in, which will have you thinking about the them long after you’ve finished reading. 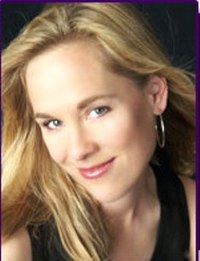 KATHARINE ASHE is the award-winning and USA Today bestselling author of historical romances that reviewers call “intensely lush” and “sensationally intelligent,” including her acclaimed Devil’s Duke Series, as well as My Lady, My Lord and How to Marry a Highlander, finalists for the prestigious RITA® Award of the Romance Writers of America. Her books are recommended by Publishers Weekly, Woman’s World Magazine, Booklist, Library Journal, USA Today, Kirkus Reviews, Barnes & Noble, Amazon, and many others, and translated into languages across the world.

Katharine lives in the wonderfully warm Southeast United States with her beloved husband, son, dog, and a garden she likes to call romantic rather than unkempt. A professor of European History, she writes fiction because she thinks modern readers deserve grand adventures and breathtaking sensuality too. For more about Katharine’s books, please visit www.KatharineAshe.com.
Posted by gpangel at 1:00 AM