Murder, She Wrote- The Ghost and Mrs. Fletcher- Feature and Review 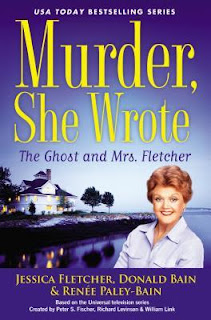 In the USA Today bestselling Murder, She Wrote series—make room for Jessica Fletcher as she cleans to catch a killer who hasn’t got a ghost of a chance.
Jessica’s friend, Eve Simpson is the town’s premiere real estate agent and has recently taken on the task of selling one of Cabot Cove’s oldest properties—the Spencer Percy House, built in 1805 by a sea captain for his young wife. Its current occupant, Joe Cooper, a crusty former carpenter, is convinced he’s about to die and wants the house sold so he can give the proceeds to his grandson, who spent much of his youth there.
But Eve’s got quite a challenge on her hands. Not only is the building in deplorable physical condition, it is also rumored to be haunted.
When Joe’s deadly premonition becomes a reality, Dr. Seth Hazlitt is not so sure the man died of natural causes. As Jessica tries to get to the bottom of Joe Cooper’s death, a medium hired by Eve attempts to rid the house of the alleged apparition. But if Jessica isn’t careful, she may be the one who joins the ranks of the dearly departed.

The Ghost and Mrs. Fletcher by Jessica Fletcher
My rating: 5 of 5 stars

The Ghost and Mrs. Fletcher is a 2015 NAL publication.

This story will be a perfect addition for your Halloween reading pleasure. I really enjoyed reading about all those old books Cliff collected and how Jessica helped them find new homes. And of course a good ghost story is always fun, too.

Donald Bain is the author or ghost/​author of more than 120 books, many of them bestsellers. They encompass both fiction and non-fiction, and include such categories as murder mysteries, westerns, comedies, investigative journalism, food, business, psychology and historical dramatizations. His autobiography, Murder HE Wrote: A Successful Writer's Life, published by Purdue University Press, is available everywhere(And is now an e-book through the publishing company, Hyphenates Books.)
His novel, LIGHTS OUT!, a thriller with comic overtones, was published in the UK in February 2014, and in the U.S. May of the same year. It's the tale of a man unhappily married into a wealthy family who goes through a monumental male mid-life crisis that leads him into an affair with a beautiful Argentinean woman. In order to finance his escape into her waiting arms, this hapless former electrical engineer becomes an unlikely criminal that brings him into the world of organized crime, a scheme that quickly unravels and finds him being sought around the world by the authorities, the Mafia, and a private investigator hired by his wife and domineering mother-in-law. NY Times bestselling author Michael Palmer said of LIGHTS OUT! "Donald Bain has a wit and sense of fiction that I have encountered only in Elmore Leonard's best stuff." And multiple award winning author Hank Phillippi Ryan commented, "Stylish, wry, droll and surprising."
He worked closely with bestselling author Margaret Truman for many years on her bestselling series of thrillers set in Washington, D.C., and continues to write novels in Margaret Truman's Capital Crime series after her death. In 2011MONUMENT TO MURDER was published, followed in 2012 by EXPERIMENT IN MURDER, which carries his bylineUNDIPLOMATIC MURDER, also by him, will be published in July of 2014, and INTERNSHIP IN MURDER will be released in 2015.
Among his books, the airline comedy,  or Me?, published more than 40 years ago, together with its sequels sold more than 5-million copies worldwide and was the basis of a television movie-of-the-week. In 2003, Penguin Books republished it as a "Penguin Comedy Classic."
Caviar, Caviar, Caviar, a coffee table book, is considered the definitive work on caviar. The Case Against Private Aviationbrought about rules changes in commercial aviation.
Veronica was the autobiography of Hollywood film legend Veronica Lake. He is currently involved in a motion picture based upon the famed actresses' career and tragic downfall.
Charlie and the Shawneetown Dame, a dramatization of a true story from the Prohibition era, and Bain's favorite of all the books he's written, has been in print for more than 30 years. Purdue University Press has published a new edition, available everywhere.
The World's Best Bartenders' Guide, written Joseph Scott, was published in October 1998. Now out-of-print, a new edition from a different publisher is expected soon.
He currently writes a series of 43 original novels (hard and ) based upon the television series, Murder, She Wrote. They're published by Obsidian, an imprint Penguin (NAL/​​Dutton), and are written “in collaboration" with TV's most famous mystery writer, Jessica Fletcher of "Murder, She Wrote," who exists only as a fictitious character.