Christmas In Eternity Springs by Emily March - Feature and Review 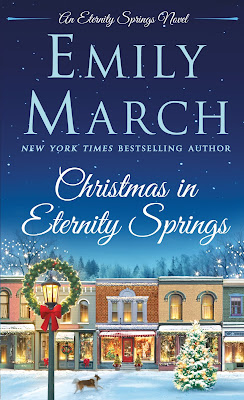 After a devastating betrayal, Claire Branham packs up the pieces of her life, along with a twenty-million-dollar secret, and moves to Eternity Springs. She opens a specialty shop—Forever Christmas—and, with the help of a surprise romance with the town’s sexy new handyman, Claire’s heart begins to heal. Until her past comes knocking…

Jax Lancaster never questioned the need to abandon his career as a Navy submariner in order to care for his young son in the wake of his ex-wife’s death. Desperate to help with this loss, Jax straps on a tool belt to give Nicholas the one thing he wants: A life in Eternity Springs. What Jax never expected to find a second chance at love with a fascinating woman for whom Christmas has become a business. But when the truth about Claire threatens their newfound happiness, can Jax prove to her that in Eternity Springs, the spirit of Christmas is real. . will last a lifetime?

In her apartment, he discovered she’d been busy since making the decision to move to Three Bears Valley.
“That’s a lot of boxes.”
“I know. I’m not quite sure how I’ve accumulated so much stuff. My closets aren’t that big. Of course, most of the boxes are filled with books.”
“That sound is my .”
She glanced at him in alarm. “You don’t have to help, Jax. I planned to hire ”
He cut off her protest by placing his index finger against her lips. Her full, soft, cherry- red lips. His voice rough, he said, “I was teasing.”
She’d gone still. The pulse at her neck visibly .
Jax recognized that he’d made a mistake touching her.
However, now that he’d done it, he couldn’t seem to stop.
He allowed his to slide, stroking her bottom lip back and forth. Her mouth fell open. Back and forth. “Do you like to be teased, Miss Christmas?”
“No. Yes. It depends,” she replied, her voice low and breathy.
Jax chuckled softly. “ You’re quite a tease yourself.”
“Why do you say that?”
Had she swayed toward him as she spoke? Maybe so.
“You have mistletoe hung from every doorway in the building.”
“That’s not t- t- teasing. It’s marketing.” Her gaze was locked on his mouth. “Customers who shop with their significant others tend to love it. They linger.”
He lifted his free hand to her waist. “I like to linger.”
“You do?”
“Oh, yeah.” He pulled her closer. “I’ve been thinking about lingering since last July.”
“You have?”
“You ask a lot of questions, Miss Christmas.”
“I’m curious.”
“ You’re delicious.”
“How do you know?” she challenged. “You haven’t kissed me.”
“Now, you have a point right there. But like I said, I like to linger.”
He tilted her face up to him and finally . . . . his mouth to hers.
Jax hadn’t kissed a woman in a very long time, and he wanted to savor the experience, so he lingered as promised. He nipped and nibbled and leisurely explored, banking the rising response triggered and keeping the moment within the bounds of a totally appropriate first kiss.
So when it suddenly caught , it caught him by surprise. He wasn’t aware of backing her against the wall. He didn’t consciously tug the tie of her apron and free the knot, then slip his hand beneath her blouse to skim across the downy softness of her skin. She tasted of
course she does, she’s Miss Christmas— and smelled of cinnamon and made him ache. For sex, oh, yeah, definitely for sex, but also for something more.
For home.
For hearth.
For love.
Whoa. That last was just what he needed to himself out of the sensual haze into which he’d fallen. He shifted his hands back to safer territory and broke the kiss, lifting his head and gazing down into her upturned face.
The vision of her lips pink and wet and swollen from his kiss proved irresistible. He needed one more taste, so he dove in again.
The one more taste became a second taste and then a third. Only when it threatened to flare out of control completely was he able to release her and take a step back. For a long minute, they gazed at one another in a bit of a daze. When Jax finally found his voice, he said, “Wow. You pack
punch, Miss Christmas.”
The slow smile that spread across her face was as sweet as a candy cane. “That’s the nicest thing anyone has said to me in a very long time.”
“That kiss is the nicest thing I’ve shared with anyone in a very long time,” he responded honestly.
She opened her mouth to speak, but hesitated. A shadow crossed her face and her teeth nibbled at that sweet lower lip. “What’s wrong?” Jax asked.
“I just . . . . is probably the absolutely wrong thing to say. Way too presumptive. But . . my last romantic disaster, I promised myself . . see . . are a dangerous thing. I don’t ever want anyone to think . . I don’t want you to think . .”
“Spit it out, Claire.”
“I like you, Jax. I really, really like you. And Nicholas, too. Like I said, I know this is , but I’d like to spend time with you. I’d like to share more . .” She waved her hand about, obviously searching for a word. “More. But I’m not in the market for a relationship, and I want to be up- front about that.”

Copyright © 2016 by Emily March and reprinted by permission of St. Martin’s Paperbacks.

Christmas in Eternity Springs by Emily March is a 2016 St. Martin’s Press publication. I was provided a copy of this book by the publisher and Netgalley in exchange for an honest review.
With all the holiday themed books to choose from, it’s hard to decide which ones will make the cut, but I never miss Emily March’s heartwarming Christmas stories.

Claire had finally rebounded from a long Christmas slump after a personal family tragedy. She was floating on air, delirious with the spirit of Christmas, when she discovered a horrible betrayal that shattered her heart, causing her to lose Christmas all over again.

Running away from her troubles, she settled in Eternity Springs and opened a Christmas shop, refusing to let her painful past win the war against Christmas. Little did she know that Eternity Springs is a magical place, and it’s her turn to see and feel that magic for herself.

Jax is a single father trying to help his son, Nicholas, from a traumatic accident, which led him to Eternity Springs, where he meets, Claire, aka- ‘Miss Christmas’. After a brief conversation, the two recognize they are kindred spirits, both trying to deal with life’s cruel and keep from falling into despair. So they challenge each other to write down one positive thing each day, and soon find themselves cheering each other up and becoming friends… and maybe a little something more.

What a terrific story! I absolutely adored Nicholas, and the way the whole story developed and expanded. I enjoyed the leisurely pacing and the magical quality of watching Claire and Jax fall in love, but wasn’t at all prepared for that stunning twist, and how everything took shape from there, but of course Christmas and Eternity Springs make great partners, and they have never let us down yet!

I fell in love with Jax just a little bit myself, and have to say, I love it when a guy stands up and proves what he’s made of, fighting for the woman he loves, showing her how love can heal the pain and heartache of the past, and can pave the way for true love and happily ever after.

This tender story of hope and healing may cause a lump in the throat and few standing tears, because it will definitely touch your heart. I love visiting Eternity Springs, especially during the holidays and I think you will too! 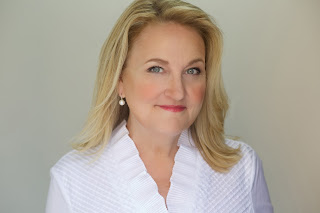 Emily March is the New York Times, Publishers Weekly, and USA Today bestselling author of over thirty novels, including the critically acclaimed Eternity Springs series. Publishers Weekly calls March a "master of delightful banter," and her heartwarming, emotionally charged stories have been named to Best of the Year lists by Publishers Weekly, Library Journal, and Romance Writers of America.