Downfall - A Brady Novel- by J.A. Jance- Feature and Review 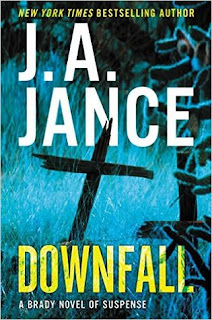 ABOUT THE BOOK:
Arizona sheriff Joanna Brady returns in this outstanding new mystery set in the beautiful desert country of the Southwest.

With a baby on the way, her mother and stepfather recently slain, a re-election campaign looming, and a daughter heading off for college, Cochise County Sheriff Joanna Brady has her hands full when a puzzling new case hits her department, demanding every resource she has at her disposal.

Two women have fallen to their deaths from a small nearby peak, referred to by Bisbee locals as Geronimo. What’s the connection between these two women? Is this a case of murder/suicide or is it a double homicide? And if someone else is responsible, is it possible that the perpetrator may, even now, be on the hunt for another victim?
MY REVIEW:

Downfall by J.A. Jance is a 2016 William Morrow publication. I was provided a copy of this book by the publisher and Edelweiss in exchange for an honest review.


Once more J.A Jance puts Joanna Brady into a complex and emotionally charged situation and once more I found myself glued to the pages, riveted as always as Joanna navigates her stressful professional life with her often complex home life.

In this chapter, Joanna, pregnant with her third child, is struggling with the untimely deaths of her mother and step-father, dealing with hurt feelings regarding her brother, Bob, being named executor of her mother’s estate, her election campaign, and by a puzzling double murder of two women that at first glance might suggest a murder/suicide.

This installment in the series finds Joanna feeling melancholy and a little tender. However, when she steps into her professional role, she’s all business. Jance tackles some controversial and disturbing issues as she works to find who murdered two seemingly unconnected women, while drawing parallels between the case and the youthful mistakes both she and her mother made and the consequences of those actions.


This is probably one of the more poignant Brady novels, although faithful followers of the series have followed Joanna on a long, emotional journey, often marred by tragedy. Still, this story has a wistful tone as Joanna looks back on her complicated relationship with her mother and mourns her loss, but also finds a way to celebrate her life.

The crime drama is explosive, shocking, and very disturbing. I was totally engrossed in this story as Joanna and Robin, her FBI partner on the case, uncover one of the most twisted and sickening cases of Joanna’s career.

Jance did a wonderful job of building suspense, keeping me guessing from start to finish, leaving me totally shocked at the outcome. But, she also tells a touching and emotional family story that proves that no matter how many books are written in the series, no matter how familiar we are with a beloved character, there is still room for growth.

Overall, this is a special installment in the series and one any fan of J.A. Jance will not want to miss. 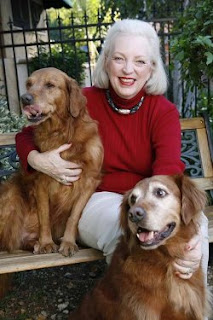