Among the Wicked by Linda Castillo- Feature and Review 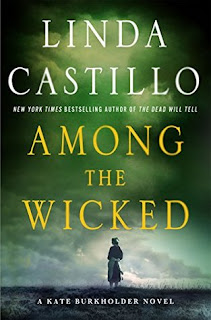 Chief of Police Kate Burkholder is called upon by the sheriff's department in rural, upstate New York to assist a developing situation that involves a reclusive Amish settlement and the death of a young girl. Unable to penetrate the wall of silence between the Amish and "English" communities, the sheriff asks Kate to travel to New York, pose as an Amish woman, and infiltrate the community.
Kate's love interest, State Agent John Tomasetti, is dead set against her taking on such an unorthodox assignment, knowing she'll have limited communication - and even less in the way of backup. But Kate can't turn her back, especially when the rumor mill boils with disturbing accounts of children in danger. She travels to New she's briefed and assumes her new identity as a lone widow seeking a new life.
Kate infiltrates the community and goes deep . In the coming days, she unearths a world built on secrets, a series of shocking crimes, and herself, alone... in a fight for her life.

Among the Wicked by Linda Castillo
My rating: 4 of 5 stars

Among the Wicked by Linda Castillo is a 2016 Minotaur publication.

I’ve read several of Linda Castillo’s novels back in the day, but I haven’t read any books from this series. I noticed several of my Goodreads friends reading this one a few weeks back and decided to check it out.

Now, I have yet another series I have to play catch up with, but for those who have not read the previous installments, I’m thinking you can just jump in anywhere along the way, because this one read just fine as a stand alone.

Kate takes a break from her chief of police duties to do an undercover job when a young Amish girl is found dead under suspicious circumstances. With Kate’s past association with the Amish, she’s the perfect person to worm her way into this particular sect, which is more close mouthed than usual. But, her mission proves much more dangerous than she ever could have imagined.

The Amish community appears to be a lot more complicated than one might think, but they can also find themselves susceptible to being taken advantage of. I’m not an expert on the Amish, but I did find this setup very interesting. The suspense was pretty tense and the author wastes no time in putting Kate in a dangerous spot, which kept me on edge at all times.

At first glance, it would seem the mystery is pretty straightforward, and the obvious suspect does not disappoint, being quite sinister and scary, but the plot is more complex that it appears on the surface and there are a few eyebrow raising twists I never saw coming, which clinched the deal for me. I’m a fan from now on and will definitely go back and read the previous books in the series.

Overall, I was pretty impressed with this one and recommend it to fans of the series, for sure, but to anyone who enjoys a good novel of suspense. 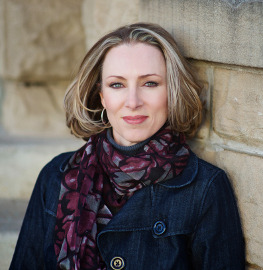 Originally from Ohio where Amish thrillers are set, Linda Castillo knew from an early age that she wanted to be a writer--and penned her first novel at the age of thirteen.  She's published thirty books for three New York publishing houses and won numerous industry awards, including a nomination by the International Thriller Writers for Best Hardcover, the Golden Heart, the Daphne du Maurier Award of Excellence, and a nomination for the prestigious Rita.

In her spare time, Linda enjoys trail riding, and dabbles in barrel racing.  She resides in Texas with her husband, two rescued Blue Heelers, and two Appaloosa horses.  She's currently at work on her next novel, a thriller set in Amish Country and featuring Chief of Police Kate Burkholder.