American Heiress: The Wild Saga of The Kidnapping, Crimes And Trial of Patty Heast- by Jeffrey Toobin- Feature and Review 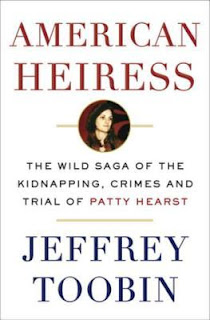 ABOUT THE BOOK:
From "New Yorker" staff writer and bestselling author Jeffrey Toobin, the definitive account of the kidnapping and trial that defined an insane era in American history
OnFebruary 4, 1974, Patty Hearst, a sophomore in college and heiress to the Hearst family fortune, was kidnapped by a ragtag group of self-styled revolutionaries calling itself the Symbionese Liberation Army. The already sensational story took the first of many incredible twists on April 3, when the group released a tape of Patty saying she had joined the SLA and had adopted the nom de guerre Tania.
The weird turns of the tale are truly astonishing the Hearst family trying to secure Patty s release by feeding all the people of Oakland and San Francisco for free; the bank security cameras capturing Tania wielding a machine gun during a robbery; a cast of characters including everyone from Bill Walton to the Black Panthers to Ronald Reagan to F. Lee Bailey; the largest police shoot-out in American history; the first breaking news event to be broadcast live on television stations across the country; Patty s year on the lam, running from authorities; and her circuslike trial, filled with theatrical courtroom confrontations and a dramatic last-minute reversal, after which the term Stockholm syndrome entered the lexicon.
The saga of Patty Hearst highlighted a decade in which America seemed to be suffering a collective nervous breakdown. Based on more than a hundred interviews and thousands of previously secretdocuments, "American Heiress" thrillingly recounts the craziness of the times (there were an average of 1,500 terrorist bombings a year in the early 1970s). Toobin portrays the lunacy of the half-baked radicals of the SLA and the toxic mix of sex, politics, and violence that swept up Patty Hearst and re-creates her melodramatic trial. "American Heiress "examines the life of a young woman who suffered an unimaginable trauma and then made the stunning decision to join her captors crusade.
Or did she?" 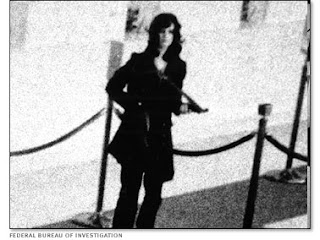 American Heiress: The Wild Saga of the Kidnapping, Crimes and Trial of Patty Hearst by Jeffrey Toobin
My rating: 5 of 5 stars

American Heiress by Jeffrey Toobin is a 2016 Doubleday publication.


In 1974, I was too young to understand the constant news coverage of the Patty Hearst kidnapping. I do have memories of the story making headlines for what seemed like forever. But, I honestly had no interest in the debate surrounding her guilt or innocence.

As I got older, I developed a curiosity about the case and hoped to find a book on the subject that would not have an agenda attached to it, or was slanted in some way. I wanted an in depth analysis of the events, told in a journalistic manner, which is hard to find. There have been countless books, TV documentaries, movies based on actual events, all telling their own version of events.

When I saw how highly rated and well received this book was, I thought this was probably my best chance of learning the real and unbiased facts surrounding the bizarre kidnapping of Patricia Hearst and the aftermath of it.

It may be impossible to write such a book without having already formed an opinion, or for one to develop once the task has begun. Despite his best efforts to keep to the facts in the case, the author’s personal opinion of Patricia is obvious.

Despite that, the book seems to have been meticulously researched, is very well organized, and is told with a clear, strong voice that commands the reader’s attention from start to finish.

For those, like myself, who were not old enough to remember the details of the case, or the climate in the 1970’s. This book will take you back to an era of violence and conflict that in our consciousness, we seem to have forgotten all about. In fact, only a month or so ago, I wrote a book review in which I expressed the opinion that the sixties were turbulent and violent, but once the seventies arrived, things settled down and the violence soon tapered off.

Toobin immediately challenges that concept, pointing out various politically motivated crimes, Watergate, serial killers and assassination attempts on the President, Jim Jones, as well as factions like the Zebra killers. The seventies was not all about dancing under mirror balls after all. In fact, it was one of the most violent decades to date. So, I stand corrected.

So, not only is this book about the Hearst kidnapping, but is also about the state our country was in during the seventies, which apparently was rather bleak.

I was shocked by some of the names that cropped up in this book, those associated with the Hearst family, but also those associated in some ways the SLA ,(Symbionese Liberation Army), of which I had never heard a thing about before now.

The transformation of Patricia Hearst, from being a nineteen year old college student, sheltered and perhaps naïve, only moderately rebellious against her parents, to a gun toting bank robber, spouting off extremist rhetoric, and back again, was shocking, jarring, and amazing. 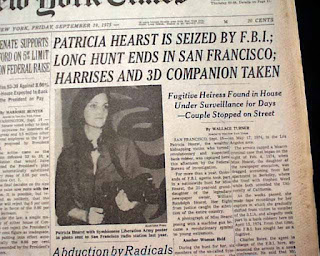 The transformations she went through are very curious and the general consensus is that she was brainwashed and suffered from ‘Stockholm Syndrome.’

It’s impossible to argue with the facts, and the fact is, Patricia was taken by force, at gunpoint, while she was quite young. Living a pampered, perhaps slightly isolated life, she may have been easily molded by these extremist radicals, but there is enough doubt, based on the facts presented in this book to give one pause.

Although we live through the events of Patricia’s captivity, the trial, the aftermath and fallout of this eighteen month ordeal, in the end, Patricia Heart remains an enigma. It is my understanding that she in no way participated in or endorsed this book, and still lives a relatively quiet life, never again causing controversy or exhibiting any hint of violence.

Yet, I have to wonder if she’s ever expressed or felt remorse or guilt for her role in the deaths of innocent people. I must say, that by the end of the book, the author had me convinced he was right about Patty. But, it is up to you, once you’ve read this accounting of events to make that decision for yourself.

Overall, this is a very thought provoking book, which will appeal to history buffs, as well as true crime readers. 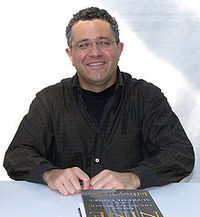 Lawyer, author, legal correspondent for CNN and The New Yorker magazine.
Posted by gpangel at 1:00 AM