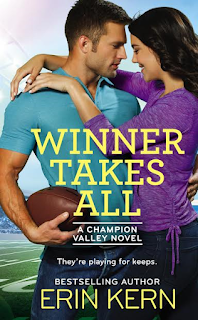 Money. Fame. Endorsements. Blake Carpenter had it all—before his professional football career spiraled out of control. Determined to rebuild his life, he takes on coaching the high school team in his Colorado hometown. Despite a few fumbles, Blake knows he can lead these boys to victory. As long as he can keep his eyes on the prize and off the team's distractingly gorgeous physical therapist. 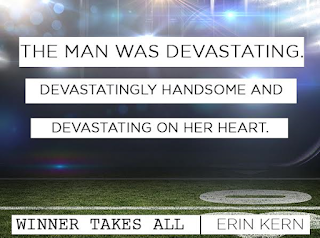 
“I don’t like people interfering with my work, Ms. Turner,” Coach Blake Carpenter told her.


“And I don’t like people telling me what to do,” he added.


“You’re used to having your way, aren’t you?” he asked Annabelle with a tilt of his head.


“No kidding? I never would have guessed.”


This time he did smile. A slow curling of his lips that matched the curling of her toes in. “So who do you think will win, Ms. Turner?”


“You might if you ever stop calling me that.”


Because it turns me on. “Because it’s too formal. Just call me Annabelle.”


“That’s not why you don’t like it,” he countered in a low voice.


They stared at each other like two caged fighters waiting for the other to wave the white flag. Only Annabelle didn’t give up, and she wasn’t about to start now. If Blake Carpenter expected her to admit defeat, he’d better think again. 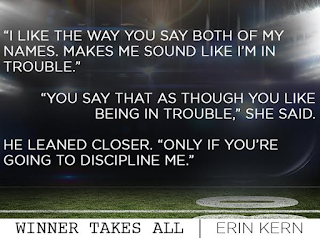 Winner Takes All by Erin Kern
My rating: 4 of 5 stars

Winner Takes All by Erin Kern is a 2016 Forever publication. I was provided a copy of this book by the publisher and Netgalley in exchange for an honest review.

This is a cute contemporary sports romance centered around Blake Carpenter, a former NFL golden boy, who left the sport amid injury and scandal, and Annabelle, a physical therapist, determined to keep tight control over life.

After returning to his hometown in Colorado, Blake is given a one shot chance to pull a winning season out of the local high school football team. But, when Annabelle arrives, insisting on helping the team out with physical therapy, the two clash right from the get-go - but maybe that bothersome chemistry between them has something to do with that?

While this story is adorable and sweet, with a sprinkle of humor, especially from Annabelle’s mother and the ‘Beehive Mafia’, the story also addresses the darker side of professional sports and the consequences of dealing with major injuries without proper rehab and therapy, and being at the mercy of coaches and trainers who do not have the athlete's best interest at heart, which can lead to a lifetime of severe pain, among other things. 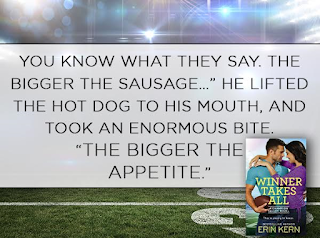 Annabelle’s personal story is emotional, as well, because she is struggling with her responsibilities to her mom and the resentment she feels for her free spirited sister, but maybe she’s had the power to change her life all along, she’s just needed to realize it.

I got caught up in this story and wound up finishing it in just a few hours. So, I would have to say I really enjoyed it. Blake and Annabelle not only found a way to make their relationship with each other work, but they helped one other face their individual stumbling blocks and issues, in order to live happier, more fulfilled lives.

Overall, this is a well- rounded romance, that leaves Blake and Annabelle is a good place, one filled with hope and promise. 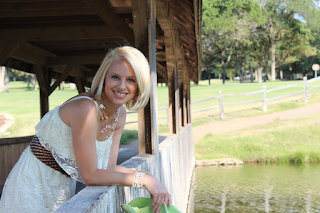 Erin was born in Houston, TX. but spent the majority of her life in the Bay Area. She married her high school sweetheart and began her writing career while being a stay-at-home mom to her daughter.


Her first book, Looking for Trouble, was on the Amazon top 100 for four months, and on the indiereads.com top ten for four weeks. The second book in the Trouble series, Here Comes Trouble, was also a top seller on Amazon. Erin currently lives in North Texas with her husband and two children.