Making a Killing- A Novel of Money and Murder by John L. Hart and Olivia Rupprecht- Feature and Review 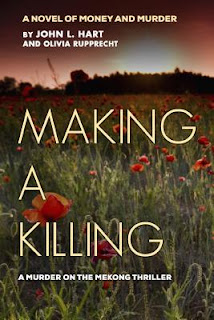 ABOUT THE BOOK:
The CIA s most valuable assassin, Agent J.D. Mikel, wasn t supposed to fall in love with anyone especially not Kate Morningside, a woman coveted by another powerful world player. When Kate is kidnapped, J.D. is pulled into a dangerous game of cat and mouse, and one false move could cost him everything. Indeed, there are players and then there are the masters who make the rules only to break them. It s not an even match for those joining an epic search for Kate on a twisted dark hunt down the Mekong River in the midst of a bitterly disputed war: Izzy, a brilliant young psychiatrist assigned to the Army s 8thField Hospital andcounting the days until he can return home; and his best friend Gregg, a gifted psychologist who served his time only to be driven back to Vietnam by his own inner demons and a rivalry with Mikel that burns as intensely as napalm. There are other wars within wars in turbulent 1970.From the CIA to the American mafia to an International cartel helmed by a master of the sadistic, all eyes are on Southeast Asia s Golden Triangle.And when it comes to a certain cash crop flourishing under the dominion of the mysterious Poppy King, everyone wants a piece of the action. Money talks. The currency?Heroin.It s a spinning maze of intrigue, politics, and mind games; a hotbed where sex, drugs, and Janis Joplin aren't always a beautifulthing.But even when no one turns out to be quite who or what they seem, one ruleremains fastacross the Devil s chessboard: Winners live. Losers die. The sequel to the national bestseller THERE WILL BE KILLING, MAKING A KILLING artfully weaves a spellbinding tapestry of dark history, psychology, and seduction the best and worst of our humanity . . .andthe hunger of our hearts. PRAISE FOR THERE WILL BE KILLING: A riveting journey into the perils of war and the darkness of the human heart stylish and provocative. Tara Janzen, New York Timesbestselling author There Will Be Killingis mesmerizing...a chilling and astonishing novel by authors who know their way around a story. Peggy Webb, USA Todaybestselling author ofThe Language of Silence Make sure you have some time to spend because you won t want to put it down until you turn the last page. Book Bug"
ENJOY AN EXCERPT:

Making a Killing by John L Hart
My rating: 5 of 5 stars

Making a Killing by John L. Hart and Olivia Rupprecht is a 2016 Story Plant publication. I was provided a copy of this book by the publisher in exchange for an honest review.

This book is the sequel to “There will be Killing”, which introduced us to Gregg, Izzy, Kate, Phillip, and J.D., as they try to navigate the treacherous waters of Vietnam and try to stay alive.

As the second book begins, J.D. and Kate are enjoying a holiday together, while Gregg has returned to the states and Izzy is still serving his time. However, when Kate is kidnapped, J.D. enlist his old comrades to help him find her.

When I first started this series, I was really unsure how I would feel about it, because books about war, fiction or non-fiction, just is not my thing at all. But, because the book was listed as a mystery thriller, I took a leap of faith and I am really glad I did.

This story deals with the shadowy, and often forgotten or ignored, drug problem and lucrative poppy trade during the Vietnam war.

A great many interesting details of J.D.’s past, is woven within a complex plot concerning “The Pale Man”, the ‘Poppy King”, and serves as a basis for a plethora of mind games and intrigue.

“If GO is like war, chess is a knife fight in a phone booth”
- Anonymous

The game of ‘GO” is a theme in the book, and anyone familiar with the game will be able to draw parallels due to the complexity of the strategy game J.D. was coached on as a child, and the complexities of the real life game he is drawn into in Vietnam.

As the players are surrounded by various types of war, be prepared for death and graphic violence, amid the sudden twists and jarring developments.

I did feel pretty bad for Izzy and Gregg who once more got suckered into a mission that really wasn’t their battle to fight. However, I think Gregg has made a turning point, which is probably for the best. The story has a rather odd epilogue, which suggests another book could be in the works. I certainly hope that is the case and will be keeping my ears open and eyes peeled for any new developments on that front.

I strongly urge you to read the first book before diving into this one, although you can read this one a stand alone.

This book is recommended to those who enjoy historical fiction, and smart, well crafted, and tense thriller.
GET YOUR COPY HERE: 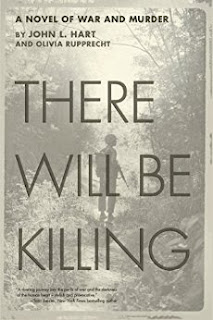 This wasn’t supposed to be Israel Moskowitz’s war. What country in its right mind would draft a child psychiatrist fresh out of his residency from Columbia University Med School and send him to Vietnam in 1969? But Izzy was here for the duration: three-sixty-four and a wake-up. A year that would change everything.

Assigned to the 99KO, the psychiatric unit of the 8th Field Hospital in sultry Nha Trang, Izzy attempts to use his skills in ways he never could have imagined; not to heal, but to get boys back onto the field of battle. A circle of compatriots soon grows around him – Gregg, the surfer dude turned psychologist; Rick, the tough-as-nails Special Ops commando; J.D., a man of many guises and even more secrets; Margie, the gorgeous, relentless head psychiatric nurse; Kate, the stunning thrill-seeker with a taste for the illicit; Nikki, the endearing, incongruously sweet Red Cross dolly. As their relationships weave and intertwine, the face of Vietnam evolves for Izzy.

But nothing will turn his world upside down – and redefine the nature of war to him – like the mission on which he finds himself an unwilling participant. Someone is massacring soldiers in unthinkable ways with the goal of demoralizing via terror, and Izzy needs to be part of the team tracking down the killer. Before he’d come to Vietnam, Izzy had never heard the term “ghost soldier.” Now one might dictate what remains of his life.

Written with the verisimilitude only possible from someone who has been there, THERE WILL BE KILLING is an unforgettable work of fiction brimming with horror and humanity.
https://www.amazon.com/There-Will-Be-Killing-Murder-ebook/dp/B00Y7ADZ74/ 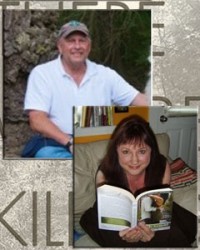 John L. Hart, Ph.D has been a practicing psychotherapist for over 40 years, starting in Vietnam where he was a psychology specialist. He received his doctorate from the University of Southern California. John is an internationally respected lecturer, has been a consultant to the nation of Norway for their Fathering Project, and maintained a private practice in Los Angeles for twenty years. He is the author of Becoming a Father from HCI Books, co-author of Modern Eclectic Therapy (Springer), and was mentored by the renowned poets Robert Bly and William Stafford.


OLIVIA RUPPRECHT (aka Mallory Rush) is an award-winning, best-selling author who began her career as a novelist with Bantam Books in 1989. After seventeen published novels with extensive foreign translations from Bantam, Harlequin, and Doubleday, Olivia managed fiction and non-fiction projects for major publishers as a copywriter, ghostwriter, book doctor, and developmental editor. She has served as editor for NINK, the official newsletter of the international author’s organization Novelists, Inc., and was Series Developer for the groundbreaking reality-based novel series from HCI Books, True Vows.
Olivia’s moveable feast of a desk is near Madison, Wisconsin, where she continues to collaborate with Dr. John L. Hart on a series of novels that are partially based on his experiences as a young therapist in a front line psych unit during the Vietnam War. There Will Be Killing is published by The Story Plant.
Posted by gpangel at 1:00 AM