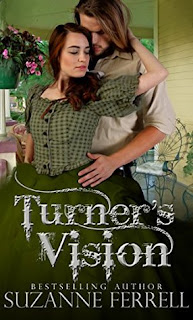 ABOUT THE BOOK:
An American Historical Romance

His visions of the future brought them together…

Micah Turner’s visions have brought him down from his Colorado mountain refuge to the nation’s capital in search of his lost sister. Her disappearance may have something to do with the murder of a senator and a beautiful woman who is also haunting his visions.

Claudia Davis spent most of her life in fear. Now she has the chance to put her past behind her and help discover who is behind the senator’s murder. When a giant man approaches her one night with a letter from her friend who’d witnessed the murder she must decide if she can put her fears aside and trust the stranger.

As the pair work together to solve the murder they discover a deeper plot, one that has its roots buried in Micah’s past. Can they fight for justice and their love? Or will Micah’s visions of blood and death be fulfilled?
ENJOY A SAMPLE:

Turner's Vision by Suzanne Ferrell
My rating: 4 of 5 stars

Turner’s Vision by Suzanne Ferrell is a 2015 publication.

I picked this book up in the KU selection and to my knowledge I have not read any other books by this author, so I had no idea what to expect, but because it is an American historical romance, which is rare, I was more than happy to give it a try. Although this book is a part of a series, it can be read as a stand alone.


Micah has been having visions concerning his sister, Patrice, which indicate she is in some kind of danger. This leads him to a huge conspiracy, but before he can get to the bottom of things, he realizes Claudia Davis is also attempting her own investigation.

Under the guise of delivering a letter to Claudia from her dear friend, Laura, Micah worms his way into Claudia’s life in order to find out what she knows and if she has any information that could help him find his sister.

Claudia is nearing spinsterhood, which is fine with her, as she loves her independence. She was trapped by her abusive father for so many years, she has vowed to never find herself under the thumb of a man again. But, when Micah wheedles his way into her life, she soon finds herself at his mercy and conflicted by her feelings.


This story has a little bit of everything in it. Micah’s visions gives the story a paranormal tint, and the danger and intrigue will appeal to romantic suspense lovers, plus there is a lot of angst and romantic turmoil inside the complicated relationship between Micah and Claudia, which will appeal to those who just want a nice love story.

At times I thought Micah came on too strong, and I had to balk a little at this heavy handedness, and how on occasion he ‘handled’ Claudia, but this is a historical novel and his actions were pretty authentic, and well meaning, I think, as he would go to any lengths to see Claudia and the orphan boys she took in, are kept safe.

On the flip side, Claudia was a little too assured of herself in the beginning and put herself in serious danger because she really was out of her element.

Claudia got knocked off balance at first, but rebounded soundly, although she could be petulant on occasion, was stubborn, but also fiercely independent, and feisty too, proving herself to be a valuable asset on more than one occasion.

I enjoyed the intrigue and mystery, which is very detailed and well plotted, with some surprises thrown in I didn’t see coming, and the rocky romance between Claudia and Micah could not have ended on a more heartwarming note.


Overall, this is a pretty good historical romance and I am glad I took a chance on it.

GET YOUR COPY HERE/ OR FREE IN KINDLE UNLIMITED: 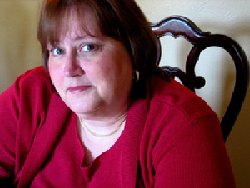 USA Today Bestselling author, Suzanne discovered romance novels in her aunt’s hidden stash one summer as a teenager. From that moment on she knew two things: she loved romance stories and someday she'd be writing her own. Her love for romances has only grown over the years. It took her a number of years and a secondary career as a nurse to finally start writing her own stories.

The author of 13 novels and an Amazon best-seller for both her series, the Edgars Family Novels and the Westen series, Suzanne's books have been finalists in the National Reader's Choice Awards--SEIZED (2013) and VANISHED (2014). Suzanne was also a double finalist in the Romance Writers of America's 2006 Golden Heart with her manuscripts, KIDNAPPED (Long Contemporary Category) and HUNTED (Romantic Suspense). She has also won The Beacon Unpublished and the CTRWA's contests in the erotica categories with her book, The Surrender Of Lacy Morgan.

Currently working on more books for her Edgars Family series (KIDNAPPED, HUNTED, SEIZED, VANISHED and Capitol Danger) and the Westen Series (Close To Home, Close To The Edge, Close To The Fire, and Close To Christmas), Suzanne hopes to bring readers more passionate and suspenseful books to fill your reading moments.

Suzanne's sexy stories, whether they are her on the edge of your seat romantic suspense or the heartwarming small town stories, will keep you thinking about her characters long after their Happy Ever After is achieved.