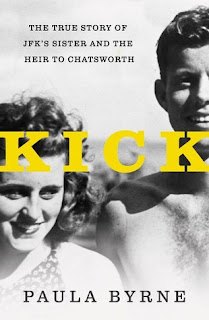 Filled with a wealth of revealing new material and insight, the biography of the vivacious, unconventional—and nearly forgotten—young Kennedy sister who charmed American society and the English aristocracy, and would break with her family for love.

Encouraged to be “winners” from a young age, Rose and Joe Kennedy’s children were the embodiment of ambitious, wholesome Americanism. Yet even within this ebullient group of overachievers, the fourth Kennedy child, the irrepressible Kathleen, stood out. Lively, charismatic, extremely clever, and blessed with graceful athleticism and a sunny disposition, the alluring socialite fondly known as Kick was a firecracker who effortlessly made friends and stole hearts.

Moving across the Atlantic when her father was appointed as the ambassador to Great Britain in 1938, Kick—the “nicest Kennedy”—quickly became the family’s star. Despite making little effort to fit into British high society, she charmed everyone from the beau monde to Fleet Street with her unconventional attitude and easygoing humor. Growing increasingly independent, Kick would also shock and alienate her devout family by falling in love and marrying the scion of a virulently anti-Catholic family— William Cavendish, the heir apparent of the Duke of Devonshire and Chatsworth. But the marriage would last only a few months; Billy was killed in combat in 1944, just four years before Kick’s own unexpected death in an airplane crash at twenty-eight.

Paula Byrne recounts this remarkable young woman’s life in detail as never before, from her work at the Washington Times-Herald and volunteerism for the Red Cross in wartime England; to her love of politics and astute, opinionated observations; to her decision to renounce her faith for the man she loved. Sympathetic and compelling, Kick shines a spotlight on this feisty and unique Kennedy long relegated to the shadows of her legendary family’s history.

Kick: The True Story of JFK's Sister and the Heir to Chatsworth by Paula Byrne
My rating: 4 of 5 stars

Kick by Paula Byrne is a 2016 Harper publication. I was provided a copy of this book by the publisher and Edelweiss in exchange for an honest review.


Does the fascination with the Kennedy’s ever really fade?

This larger than life family, is remembered for their unprecedented success and mark on our country and our lives, but they are also remembered for the heart wrenching tragedies the family has endured. This book is about Kathleen "Kick" Kennedy, the fourth Kennedy child, whose life ended abruptly, and shockingly, at such a young age.

While I have always been very curious about the Kennedy assassination, having read many books on the subject, both fiction and non-fiction, I can’t say my interest in the Kennedy family has ever strayed beyond that.

I confess to knowing very little about Kathleen Kennedy before starting this book, so for me it has been very enlightening, giving me a different perspective on the family.

Kathleen appears to have been a vivacious girl, smart, funny, and full of mischief. She was close to her father, but seemed to have an especially close relationship with her brother, Jack.

Despite her life being cut so tragically short, she did appear to live it with gusto, unafraid to tread into unchartered territory, break rules, and was a little scandalous, especially for the time era in which she lived, which did not always please her parents.

This accounting of her life is interesting, but, the reading could be dry at times, especially in the beginning with the requisite background on the Kennedy family dynasty. But, as ‘Kick’ grew older, her personality really shined and the book does include some personal stories and excerpts from letters she wrote, which gives the reader a little insight into the type of person she was.

I found the latter part of her short life, to be the most interesting and controversial. I think her death was taken very hard by the family, but it was also quickly hushed, as there were some aspects of Kathleen’s death the family would rather not have publicized.

KATHLEEN KENNEDY ON HER WEDDING DAY 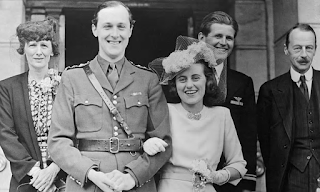 While Rose Kennedy has been dubbed, “The Forgotten Kennedy”, I don’t think Kathleen’s life has been examined all that closely either. I gleaned enough information from this book to have whetted my appetite, if you will, and I would like to learn more about ‘Kick’, and perhaps other Kennedy family members, besides JFK.

I’m not sure if this book is the most comprehensive accounting of her life, but it gave me enough information and insight to get a pretty clear picture of Kathleen “Kick” Kennedy.

Kathleen certainly packed a lot of living into her short life, and was ahead of her time in many ways. She is certainly an interesting figure and I am glad I took the time to learn more about her life. 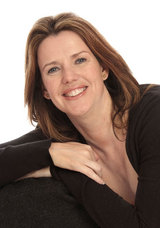 Paula Byrne is a British author and biographer. She is married to writer Jonathan Bate, the Shakespeare scholar.
Posted by gpangel at 1:00 AM