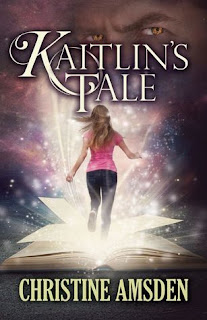 ABOUT THE BOOK:
Kaitlin Mayer is on the run from the father of her baby – a vampire who wants her to join him in deadly eternity. Terrified for her young son, she seeks sanctuary with the hunters guild. Yet they have their own plans for her son, and her hopes of safety are soon shattered.

When she runs into Matthew Blair, an old nemesis with an agenda of his own, she dares to hope for a new escape. But Matthew is a telepath, and Kaitlin’s past is full of dark secrets she never intended to reveal.

ENJOY AN EXCERPT:
Chapter 1
To: Cassie.Scot@gmail.com
From: Kaitlin.Meyer12@gmail.com
Re: Jason is Dead
Jason is dead.
Go ahead. Say “I told you so.” You never do, but just this once could you stoop down to the level of us mere mortals long enough to sneer like a ten-year-old? Put a little hip wiggle into it and wrinkle your nose. Roll your eyes at me like I’m the biggest moron on the planet.
After all you did, in fact, tell me so.
And when you’re finished, I need you to do me the biggest favor I’ve ever asked in my life. In all likelihood, the last favor I’ll ever ask. I need you to take Jay. I need you to keep him safe, because you and Evan are probably the only two people who can. I hope that one day you can find it in your heart to love him like you love your own daughter.
Your Friend,
Kaitlin
Kaitlin closed her eyes as she hit send, praying that Cassie still was her friend. Praying that nothing went wrong over the next two days. And just… praying.

Kaitlin's Tale by Christine Amsden
My rating: 5 of 5 stars

Kaitlin’s Tale by Christine Amsden is a 2016 publication. I was provided a copy of this book in exchange for an honest review.

This book is connected to the Cassie Scot Paranormal Detective series, and it is probably a good idea to have read those books before tackling this one.

If you recall, Kaitlin is one of Cassie’s best friends, so I was happy to see she will finally get to reveal her own life journey, and share it with us.

Kaitlin finds herself in a world of hurt, as her baby daddy had been turned into a vampire and is now determined to ‘turn’ Kaitlin. After her attempts to enlist Cassie’s help fall through, Kaitlin seeks refuge with the Hunter’s Guild, only to find herself caught up in yet another dangerous scenario, where she will once again face an old enemy.

Everyone will also remember Matthew, a strong telepath, once engaged to Cassie. While Kaitlin knows she can’t trust Matthew any further than she could throw him, he may be her only ally, the only one who can keep her and her young son safe.

As the couple form an uneasy alliance, they also find a mutual attraction to each other could be the catalyst for an entirely new regime and the turning point in their lives.

This series has an amazing ability to branch out with secondary characters and build new stories that are connected to familiar ones, while creating a parallel between the real world and the world of fantasy that could give one pause.

The magical realm, as it turns out, is not all that different from our own, when it comes to the lust for power and control. The prejudices toward those who are different, who do not hold the same high achieving forms of paranormal abilities are shunned, thought of as lesser beings, but, as is often the case, they prove it is unwise to underestimate them.

This story is one of the more emotional ones from this series, and deals with some uncomfortable subject matter as well as introducing more adult sensuality into the equation. This is also the powerful tale of a mother’s fierce love for her son, which forces her to take risks, and put her own life on the line to keep him safe.

The one very prevalent theme I picked up on throughout the story, was trust. Kaitlin, understandably, has some pretty heavy trust issues, but with lives hanging in the balance, she will learn not only to trust, but that she is worthy of love, and capable of love, a power that is stronger than any vampire, werewolf, or any other magical gift or ability.

This companion novel, or spin off, if you will, introduces some new characters as well as bringing back familiar faces, and is complex, absorbing, as well as suspenseful. The answers are seldom pat, and shows how easily one decision, a good or a bad one, can change the outcome of one’s life drastically.

I think in the end, Kaitlin and Matthew will find that accepting the cards life has dealt them, will make them stronger, giving them the courage and strength to face the future and do what is best for everyone.

Another outstanding addition to the series! 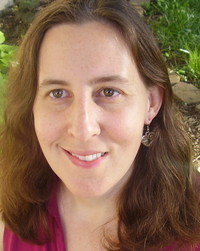 Christine Amsden has been writing science fiction and fantasy for as long as she can remember. She loves to write and it is her dream that others will be inspired by this love and by her stories. Speculative fiction is fun, magical, and imaginative but great speculative fiction is about real people defining themselves through extraordinary situations. Christine writes primarily about people and it is in this way that she strives to make science fiction and fantasy meaningful for everyone.

Christine currently lives in the Kansas City area with her husband, Austin, who has been her biggest fan and the key to her success. They have two beautiful children.
Posted by gpangel at 12:30 AM