Sam and Nick return in the romantic suspense, FATAL IDENTITY, that is sure to keep you on the edge of your seat! Being released today, FATAL IDENTITY is the tenth novel in Marie Force’s Fatal Series being published by HarlequinHQN. Make sure you order your copy today! 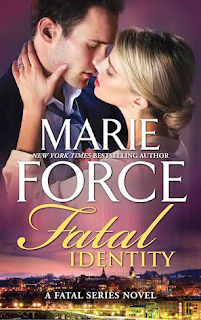 Every family has its secrets…

As the first anniversary of her marriage to Vice President Nick Cappuano approaches, Lieutenant Sam Holland is dreaming of Bora Bora—sun, sand and a desperately needed break from the DC grind. But real life has a way of intervening, and Sam soon finds herself taking on one of the most perplexing cases of her career.

Government worker Josh Hamilton begs Sam to investigate his shocking claim that his parents stole him from another family thirty years ago. More complicated still, his “father” is none other than the FBI director. When a member of Josh’s family is brutally murdered, Sam begins to question how deep this cover-up goes. Is it possible the revered director was part of a baby-napping ring and that others involved are also targets?

With a killer intent on deadly revenge and her team still reeling from a devastating loss, Sam’s plate is full—and when Nick and their son, Scotty, take ill, is her dream of a tropical anniversary celebration in peril too?

EXCLUSIVE EXCERPT:
At times, she’d wondered if he had superpowers that he kept secret from her. How else to explain the way he managed to get so much done while also taking excellent care of her and Scotty? Sam kissed his cheek, and even though she knew she shouldn’t, she kissed his lips too.
“, not tonight, babe.”
Sam laughed out loud.
His eyes popped open.
“I think that’s the first time you’ve ever said no to me.”
Clearing his throat, he said, “I take it back. I never say no to you.”
“You’re allowed to today. How you doing?”
“Never better.”
“Now you’re lying to me?”
“Don’t want you to worry.”
“Too late for that.”
“How’s the boy?”
“Worried about TJ’s party.”
Nick winced. “, crap. That’s tomorrow, right?”
“Yep.”
“What are the odds that we’re going to be free of this plague by then?”
“Slim to none.”
“He’ll be so disappointed.”
“We’ll make it up to him—somehow.”
“I’ve got to go make a call, and then I’ll come back and tell you a story you won’t believe.” 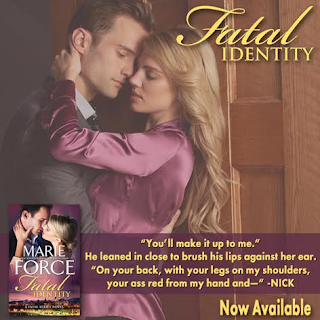 Fatal Identity by Marie Force
My rating: 4 of 5 stars

Fatal Identity by Marie Force is a 2016 HQN publication. I was provided a copy of this book by the publisher and Netgalley in exchange for an honest review.

After all the terrifying events that took place in ‘Fatal Scandal’, the next book, ‘Fatal Frenzy’ slowed things down and allowed Sam to address some heavy PTSD symptoms, and gave everyone else a chance to deal with the fall out. But, as cathartic as this was, for the characters and perhaps for the reader as well, I was happy to see this tenth installment get back to a more balanced pace.

Sam must cool her heels after being handed a suspension, while everyone nervously waits to see if the second lady will be charged with assault, after throwing what most of us will agree was a justifiable punch.

None the less, Sam finds herself embroiled in an explosive situation, when Josh Hamilton begs her to help him discover his true identity, after he begins to suspect the thought he was born into, may have kidnapped him a baby and raised him as their own. This is a shocking allegation all on its own, but as it turns out, Josh Hamilton’s father is none other than the director of the FBI. Wowza!

Things really get complicated, when Josh becomes the prime suspect in a shocking murder, prompting a closer look at the esteemed director’s family life.

Meanwhile, the team suffers another horrific blow, which leaves Gonzo in worse shape than he already was, while Nick and Scotty come down with an acute case of the flu, which could mean Sam’s anniversary plans are in jeopardy.

This is another explosive, high octane, super steamy, addition to this wildly popular romantic suspense series. There is a lot to analyze, so here goes:

I was pleased with nearly all the developments in this chapter of the series, in regards to the recurring characters. Gonzo has some serious moments of doubt, but I loved the way the author addressed these issues in such a realistic fashion.

Some real progress was made in other relationships and I was very relieved by how everything seems to be shaping up for our favorite couple and their close acquaintances and friends.

The investigation into the alleged baby kidnapping, is full of mind blowing twists, with the most scandalous revelations I’ve encountered in… well, I don’t know when. Whew!

Overall, fans of this series will most likely find this latest addition as addictive and satisfying as they have all the prior installments. Personally, I closed this book with a feeling of deep satisfaction, because the story ties up a few loose ends from the last two books, and gives our favorite people a nice little reprieve they all deserve.

However, it does make me wonder what we might expect in the future. Hopefully, there will be wedding bells and the pitter patter of little feet!!

This one gets 4 stars

Add it to your Goodreads Now! 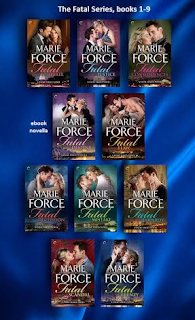 And don’t forget to grab the previous titles in the Fatal Series Today!

Marie Force is the New York Times bestselling author of contemporary romance, including the Gansett Island Series, which has sold more than 2.2 million books, and the Fatal Series from Harlequin Books, which has sold more than 1 million books. In addition, she is the author of the Green Mountain Series from Berkley Publishing as well as the new erotic romance Quantum Series, written under the slightly modified name of M.S. Force. Her goals in life are simple—to finish raising two happy, healthy, productive young adults, to keep writing books for as long as she possibly can and to never be on a flight that makes the news.