Don't You Cry by Mary Kubica- Feature and Review 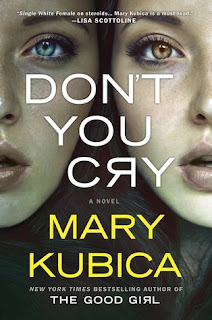 ABOUT THE BOOK:
New York Times bestselling author of The Good Girl, Mary Kubica returns with an electrifying and addictive tale of deceit and obsession

In downtown Chicago, a young woman named Esther Vaughan disappears from her apartment without a trace. A haunting letter addressed to My Dearest is found among her possessions, leaving her friend and roommate Quinn Collins to wonder where Esther is and whether or not she's the person Quinn thought she knew.

Meanwhile, in a small Michigan harbor town an hour outside Chicago, a mysterious woman appears in the quiet coffee shop where eighteen-year-old Alex Gallo works as a dishwasher. He is immediately drawn to her charm and beauty, but what starts as an innocent crush quickly spirals into something far more dark and sinister than he ever expected.

As Quinn searches for answers about Esther, and Alex is drawn further under Pearl's spell, master of suspense Mary Kubica takes readers on a taut and twisted thrill ride that builds to a stunning conclusion and shows that no matter how fast and far we run, the past always catches up with us in the end
BOOK TRAILER:

Don't You Cry by Mary Kubica
My rating: 4 of 5 stars

Don’t you Cry by Mary Kubica is a 2016 MIRA publication. I was provided a copy of this book by the publisher and Edelweiss in exchange for an honest review.

Mary Kubica has a very unique style of writing that pulls me in, little by little, tossing small crumbs of information at me, leaving me ravenous for more details, but always keeping me at arm’s length, oblivious to my hunger pangs.

This spellbinding tale begins with Quinn Collins’ discovery that her roommate, Esther, has disappeared into thin air. Initially she is slightly puzzled, vaguely worried, but rationalizes her fears away until she has to admit something is very wrong.

Meanwhile, in a small town, just outside Chicago, a young man, Alex, becomes obsessed with a girl who stopped by the coffee shop where is works. He is so smitten by her, and her air of mystery, he follows her, and tries to befriend her, discovering they share a few similar emotional scars. But, Pearl occasionally sends out an underlying vibe that makes him uneasy at times, fueling his desire to unlock the mysteries of his Pearl, a task he may come to regret.

The novel employs a duel first person perspective, alternating between Quinn and Alex. While I loathe this format in romance novels, I find it works effectively in certain thrillers, this being one of them.

The question that irritated me and kept me frustrated, was how the two narratives could possibly be related to each other. Quinn was forthright, actually doing some detective work with the help of a colleague, a guy she also has a little crush on. Quinn is worried sick about Esther, but also suspects her of something quite sinister. She flips and flops between the two emotions, while searching for clues to Ester’s disappearance, uncovering information that paints Ester in a whole new light, exposing a dark side of her that is nothing at all like the 'Saint Ester' Quinn thought she knew, which shocks Quinn and keeps her in a chronic state of panic, wondering if something horrible has happened to her roommate, or if Quinn is a possible target.


By contrast, Alex is a little disquieting, as he describes watching ‘Pearl’, trying to decide what her story is, employing a lush prose, which cast a hypnotic quality to the events as Alex sees them, lulling me into a dreamlike like state, as Alex unwittingly succumbs to the spell Pearl cast on him. His voyeurism leads him to do a little digging of his own, about a local haunting, which became legendary. But, how is this connected to Ester and her disappearance?

I don’t know how to explain the atmosphere of this book exactly, but I hope you get the gist of it. Reading this book was like watching the characters from afar, unable to get a close-up shot of them. It was as though the characters were sealed inside an invisible barrier, impenetrable to the reader.

So, don’t expect a deep character study, or any real emotional connections to the players, especially since we are left in the dark for so long, and of course, we don’t know who we can trust. However, this setup works to create a taut, suspenseful atmosphere that kept me turning pages, unable to tear myself away from it until I had all the questions answered.

The beginning of the book had me so bewildered, I admit it took me a little time to get into a groove, and fair warning, the buildup is slow and tantalizing, as opposed to fast paced, with heart stopping plot twists. This style of suspense is not everyone’s cup of tea, and the effect can often fall flat, but when it works, it’s great, it will just require patience on the part of the reader. The story is unstable, at times, and nearly spiraled out of control in the last several chapters, which necessitated my need to re-read some passages to make sure I understood it correctly.


The conclusion, is unique with the two story lines coming together in unison, but left me with a mix of emotions ranging from uneasiness, sadness, anger, but also vastly relieved.


Overall, this is a nice little thriller, moody, and tense, and will definitely keep you guessing. 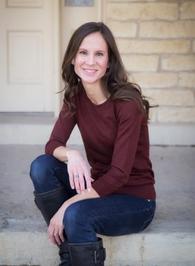 Mary Kubica is the bestselling author of THE GOOD GIRL (2014) and PRETTY BABY (2015). She holds a Bachelor of Arts degree from Miami University in Oxford, Ohio, in History and American Literature. Mary lives outside of Chicago with her husband and two children and enjoys photography, gardening and caring for the animals at a local shelter.
Posted by gpangel at 1:00 AM