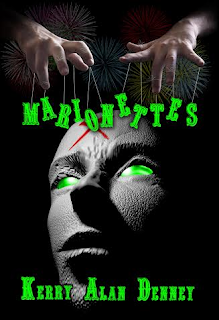 Resuscitated after he drowns and dies in a flood, David Flint discovers he has returned from the other side with an uncanny ability: He can “jump” into people’s bodies and minds, and control their thoughts and actions.

David believes it's a gift, and wants to use it to help people. Then four members of a ruthless drug ring savagely attack his fiancée and leave her in a coma, and David tries to use his new power to destroy the whole ring. But the ringleader, a voodoo priest known as the Zombie Master, is a formidable man with a deadly secret: He has the same incredible ability as David.

When the two human marionette masters clash in a brutal bloody showdown, using the ring’s members as their puppets, David discovers he’s battling for much more than his life—he’s fighting to rid the world of an evil human abomination.

Marionettes illuminates the greatest achievements of the human spirit and the darkest corridors of our minds, and answers the age-old question: What are the consequences of absolute power?

My whole life changed after I drowned and died in the flood.

Upon my resurrection, I thought I was dreaming. My head felt fuzzy. A little man inside it was drilling away at my brain with a tiny but immensely effective jackhammer. My mouth felt like it was glued shut, my tongue ten times normal size and made of sandpaper. A crew of little men sliced furrows in my throat with dull rusty swords, cackling merrily as they destroyed my trachea.

Some sadistic bastard apparently burned a branding iron into my corneas.

It was far worse than any hangover I ever had—and I’d had some doozies since Karin died and left me alone, lost, and unmoored in a callous world.

When I woke, the acrid tang of antiseptic mixing with an unpleasant odor stung my nostrils. Through a crimson haze, I saw a pretty nurse gaze down at me and smile. She looked like an angel.

“Hi, David!” she sang, her perfect white teeth gleaming as if lit from within. “Welcome back.” She caressed my face with a warm hand, glanced at some monitoring equipment beside the bed I lay in, and turned and hit a switch behind me. “Laura, page Dr. Yamaguchi. Mr. Flint’s awake.”

The angel turned back to me. “I bet you’re thirsty. We’ll fix that shortly, okay? After the doctor sees you, maybe we can give you some ice chips.”

I shut my eyes to block out the combined glare of her smile and the overhead fluorescence. When I opened them again, an attractive Asian woman in her forties with close-cropped black hair streaked with gray stood over me. Her brow wrinkled, a tentative smile curling the corners of her lips upward.

“Welcome back, Mr. Flint,” she said. “I’m Dr. Yamaguchi. You’re lucky to be alive. It’s a miracle the couple who brought you in were able to resuscitate you. We almost lost you twice last night. Apparently you lead a charmed existence. Don’t try to speak yet.”

I tried anyway, but couldn’t. The miniature swordsmen in my throat were having a blast trying to cut their way out. I nodded, then grimaced as the movement made the mad Lilliputian with the jackhammer pound more little holes in my brain. I shut my eyes again and drifted off.

It was all surreal. I remembered my name and profession, but I couldn’t remember what happened to me. Every time I strained for the memory, it receded while raging torrents of dark waters overwhelmed me.

Consciousness was an assault upon my senses. But in what I initially mistook for dreams, my perception and sense of taste, touch, and smell were immaculate. 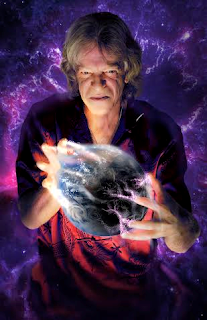 Colleagues and readers have dubbed Kerry Alan Denney The Reality Bender. The multiple award-winning author of the paranormal thrillers Dreamweavers (Juju Mojo Publications, August 2015) and Soulsnatcher (Juju Mojo Publications, April 2014), the post-apocalyptic sci-fi/ horror thriller Jagannath (Permuted Press, February 2015), and numerous short stories published online and in anthologies, Kerry blends elements of the supernatural, paranormal, sci-fi, fantasy, and horror in his work: speculative fiction at its wildest and craziest. With joy, malicious glee, and a touch of madness, he writes reality-bending thrillers, even when the voices don’t compel him to. His protagonists are his children, and he loves them as dearly as he despises his antagonists... even when he has to kill them.

Kerry lives in Stone Mountain, Georgia with his golden retriever Holly Jolly, a veteran professional Therapy Dog, where he is currently writing his next supernatural thriller... and deciding who to kill in it.

Be on the lookout for Kerry’s new post-apocalyptic/ paranormal thriller A Mighty Rolling Thunder, coming December 3, 2016 from Burning Willow Press.