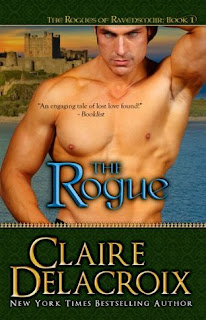 Seductive and mysterious, Merlyn was the laird of Ravensmuir — never had a man so stirred my body and soul. I gave myself to him — willingly, trustingly, passionately — and we soon wed. Then a horrible revelation emerged, shattering my innocence and my marriage...

Five years later, Merlyn returned to my doorstep, desperate for my help. The scoundrel swore he was haunted by memories of me, that a treasure locked in Ravensmuir could clear his name. Yet I could not surrender to his will again. Now he is said to be murdered and Ravensmuir has fallen into my hands.

But even as I cross the threshold of this cursed keep, I hear his whisper in the darkness, feel his caress in the night, and I know that Merlyn has told me but part of his tale. Should I do as is right and expose his lair? Or dare I trust my alluring but deceptive spouse - the rogue who destroyed my heart?

The Rogue by Claire Delacroix
My rating: 4 of 5 stars

The Rogue by Claire Delacroix (Deborah A. Cooke) is a 2014 publication. I was provided a copy of this book in exchange for an honest review.
I was intrigued by the combination of historical romance, colored with Gothic elements, and a paranormal tint, that this book promised, in a medieval setting, no less! I had a feeling this book was right up my alley and I was right.

Merlyn marries Ysabella in a rush, as he immediately desires her and wants her for his own. However, Ysabella soon discovers her husband’s dark secrets and flees Ravensmuir. Merlyn does not attempt to lure her back and five long years pass, before he appears to Ysabella, pleading with her to help him.

Furious with him, but sorely tempted to succumb to his charms, Ysabella refuses him, only to lose him forevermore when he is found murdered. But, perhaps most shocking of all, is that Ravensmuir is now belongs to Ysabella.

Now life will be much easier for Ysabella, her sister, and young brother. But, upon arrival at Ravensmuir, Ysabella is greeted by an old enemy and will find the walls of Ravensmuir are haunted with more secrets than she could ever imagine…

First of all, I loved all the character’s names, which gives the story a real Medieval quality, and the way Ysabella narrates the story feels so authentic.

There is mystery, suspense, a slight paranormal tinge, as well as plenty of secrets, intrigue, and double crosses, but of course there is also a love story that endures many hardships, but one that will triumph in the end.

Ysabella is one stubborn lady, and at times she carries things a little too far. She barely knows her husband when they marry, and immediately he begins to behave oddly, which gives her reason to believe he has lied to her, and is involved in a dishonest trade.

Unable to live with him under those circumstances, she leaves him, never giving him an opportunity to tell his version of events.

Naturally, there was much more to the story than Ysabella knows, and now the secrets entombed in Ravensmuir will reveal her husband’s true nature.

Ysabella and Merlyn suffer from that age old problem… a failure to communicate. While Ysabella comes off as a bit self-righteous, if her husband had confided in her to begin with, things might not have spiraled out of control. Naturally, Ysabella was annoyingly stubborn, to the point of overkill, and the conflict did linger on longer than need be, both characters were in the wrong.

But, it was fun seeing all the secrets they both held slowly reveal themselves and watch them fall in love all over again.

But, the love story is only part of the story, which is very absorbing, rich in details, and loaded with drama and mystery.

Overall, this is my kind of story. I love Medieval stories with the Gothic and paranormal elements included, and this story has all that, plus a little bit of fiery passion to put the icing on the cake.


GET YOUR COPY HERE:
https://www.amazon.com/Rogue-Rogues-Ravensmuir-Book-ebook/dp/B00R4XEO3K 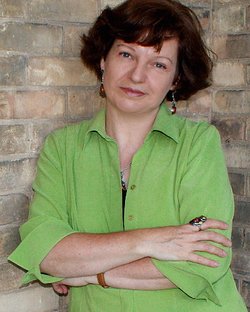 Deborah Cooke sold her first book, a medieval romance which was published under the pseudonym Claire Delacroix, in 1992. Since then, she has published over fifty romance novels in a wide variety of subgenres, including historical romance, paranormal romance, time travel romance, fantasy romance, contemporary romance, fantasy with romantic elements and paranormal young adult with paranormal elements. She makes her home in Canada with her husband. When she isn't writing or reading, she can be found knitting, sewing or hunting for vintage patterns.

Deborah is currently working on a new paranormal romance series featuring dragon shifters, and a new contemporary romance series, both launching in 2016. She also writes medieval romance as Claire Delacroix and is writing the Champions of Saint Euphemia series.


Visit Deborah's website at
http://deborahcooke.com
Posted by gpangel at 1:00 AM