Best of My Love by Susan Mallery- Feature and Review 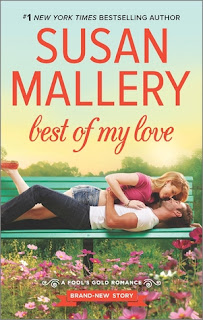 ABOUT THE BOOK:
An irresistible new love story from the #1 New York Times bestselling author of the Fool's Gold series, set in a town Library Journal calls "so appealing, readers will want to start scoping out real estate."

To overcome her painful past, baker Shelby Gilmore goes on the hunt for a friend—a male friend—to convince her stubborn psyche that men can be trusted. But where in a town as small as Fool's Gold will the petite blonde find a guy willing to not date her?

Dark, charming Aidan Mitchell puts the "adventure" in Mitchell Adventure Tours…and into the beds of his many willing female tourists. Until he realizes he's inadvertently become that guy—the one-night Casanova—and worse, everyone in town knows it. Maybe Shelby's boy/girl experiment will help him see women as more than just conquests so he can change his ways and win back his self-respect.

As Aidan and Shelby explore the secret lives of men and women, the heat between them fires up the Fool's Gold rumor mill. If no one will believe they're just friends, maybe they should give the gossips something to really talk about!

Best of My Love by Susan Mallery
My rating: 4 of 5 stars

The Best of My Love by Susan Mallery is a 2016 HQN publication. I was provided a copy of this book by the publisher and Edelweiss in exchange for an honest review.

The last book in this series I read was kind of lukewarm, but I realize any long running series will have a ‘one off’ from time to time, so I was confident the next book I picked up would be back on track.

I did worry at first, though, when the first half of the book seemed to repeat the “We are just friends” mantra over and over again ad nauseam, and the story seemed to move along at a snail’s pace with only a handful of humorous moments keeping me from total boredom, because there wasn't much action, or romance. I was beginning to think this book was basically a vehicle in which to set up a potential new series set in Happy, Inc.

But, at around the half way mark, the story started to pick up steam and I found myself fully engrossed in Aidan and Shelby’s drama.

Shelby Gilmore is Kibling’s sister, a young lady haunted by her past with men. She is determined to step out of her shell and learn to believe that all men are not abusive. To that end, she devises a plan to become ‘just friends’ with Aidan Mitchell. Why Aidan?

Well, it would seem Aidan has avoided relationships and marriage at all cost, which means he can’t date local women because he doesn’t want a trail of broken hearts and hurt feelings left in his wake. So, he dates tourists. No harm, no foul, right? Well, not exactly. When one of his many conquests gets hurt, Aidan takes a good long, hard look at himself, and doesn’t like what he sees. He has begun to think of women in a way that is not healthy and by his own admission, he’s turned into an asshat.

So, Aidan agrees to remain ‘just friends’ with Shelby for six months. He needs to begin to see woman as people and learn respect and honor. So, he thinks becoming friends with Shelby will help him with that goal.

Naturally, as things progress, the couple begins to fight off romantic feelings and their friendship develops into something deeper. But, will they be able to put their fears behind them and admit they love each other?

There are a few humorous situations as Aidan hangs out with the girls, and Shelby hangs out with the guys that are priceless. There is a wonderful character development, and while the process is slow, and at times tedious, it is well worth it in the end. I did enjoy watching this couple fall in love, and grow as individuals and as a couple.

I am wondering if maybe this series is coming to a close and a new connected series is in the works. I would love to see a little change of scenery myself, and I’m sure after twenty novels set in one location, the author is ready for a change of pace as well. The prospect certainly does sound intriguing.

Either way, this book ended up being a nice, solid installment in the series, and I loved the way things came together in the end, with a really sweet HEA. 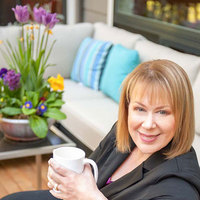 With more than 25 million books sold worldwide, #1 New York Times bestselling author Susan Mallery is known for creating characters who feel as real as the folks next door, and for putting them into emotional, often funny situations readers recognize from their own lives. Susan’s books have made Booklist’s Top 10 Romances list in four out of five consecutive years. RT Book Reviews says, “When it comes to heartfelt contemporary romance, Mallery is in a class by herself.” With her popular, ongoing Fool’s Gold series, Susan has reached new heights on the bestsellers lists and has won the hearts of countless new fans.