Elizabeth Michels- Author of The Infamous Heir- Buzzfeed Interview- Check it Out!! 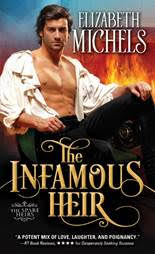 Elizabeth Michels just wrote a fun post for Buzzfeed about what it’s like to be a romance author and how expectations stack up against the reality:\
http://www.buzzfeed.com/elizabethmichels/expectation-vs-reality-being-a-romance-author-28of7
Praise for The Infamous Heir:

“[An Infamous Heir] is at once a well-crafted mystery and a simmering romance.”
– Sarah MacLean, The Washington Post
“Michels’s latest is the complete package: a captivating romance with gripping suspense wrapped up in a novel to be savored.”
– Publishers Weekly, STARRED Review
“Readers are treated to Michels’ strongest story yet. The engaging characters, intricate plotline and powerful love story hold readers from beginning to end as they watch the changing relationship between headstrong lovers as they unravel a mystery. Savor this tale.” – RT Book Reviews, 4 ½ Stars and March Top Pick!
The Spare Heirs Society Cordially Invites You to Meet Ethan Moore: The Scoundrel
Lady Roselyn Grey’s debut has finally arrived, and of course, she has every flounce and flutter planned. She’ll wear the perfect gowns and marry the perfect gentleman…that is, if the formerly disinherited brother of the man she intends to marry doesn’t ruin everything first.
Ethan Moore is a prize-fighting second son and proud founding member of the Spare Heirs Society—and that’s all he ever should have been. But, in an instant, his brother’s noble title is his, the eyes of the ton are upon him, and the lady he’s loved for years would rather meet him in the boxing ring than the ballroom.
He’s faced worse. With the help of his Spare Heirs brotherhood, Ethan’s certain he can get to the bottom of his brother’s unexpected demise and win the impossible lady who has haunted his dreams for as long as he can remember…
Elizabeth Michels grew up on a Christmas tree farm in rural South Carolina. After tip-toeing her way through school with her focus on ballet steps and her nose in a book, she met a boy and followed him a thousand miles away from home to Kansas City, Missouri, before settling down in North Carolina.
Posted by gpangel at 1:57 PM