The Striker by Monica McCarty - Spotlight and Review 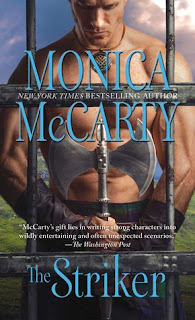 Six years ago, Eoin "Striker” MacLean endured the greatest betrayal of his life, a disaster that led Robert the Bruce to a crushing defeat and left Eoin without the spirited woman who ruled his heart. Eoin knew that falling in love with his sworn enemy’s daughter was risky, dividing him between a possessive desire for beautiful Margaret MacDowell and an undying loyalty to his king. He promised Bruce that he would keep his fiery bride in the dark about the elite Highland Guard, but he could not predict the dire consequences his secret would have on his young marriage. Nor could he foresee how surrendering to temptation could cripple Bruce’s cause, forcing Eoin to blame his wife—and himself for trusting her.

Now, as Bruce prepares to challenge the resistance’s remaining strongholds, Eoin finally has his chance for revenge against the woman he once loved so fiercely and her entire clan. But when ferociously independent Margaret reveals a surprise that unites her with Eoin, neither of them will let their love go down without a fight.

The Striker by Monica McCarty
My rating: 5 of 5 stars

The Striker ( Highland Guard, #10) by Monica McCarty is a 2015 publication

This series is a notch above many historical or Highlander romances, due to the obvious research and commitment to authenticity the author applies to these stories. This story has all the elements a good love story should and transports the reader into another realm, another time and place, where honor and loyalty rules, but love conquers all. 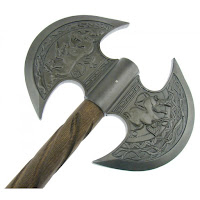 This is an outstanding novel and I highly recommend it to historical romance lovers, especially those who like those delicious, hearty, and fierce Highlanders!

This review is the copyrighted property of Night Owl Reviews
To read this review in full click this link: https://www.nightowlreviews.com/V5/Re...

Law School was also where I fell in love with Scotland. In my third year, I took a Comparative Legal History class, and wrote a paper on the Scottish Clan System and Feudalism. So I immediately dropped out of law school and went on to write Scottish Historical Romances…well no, not quite. You see, I always knew I wanted to be a lawyer. My father was a lawyer, I was a “poet” (i.e., not into math), and I love to argue. It seemed natural

And how did I end up writing romance? It’s not as divergent as it seems. What I loved about being a lawyer are the same things I love about being a writer—research and writing. The only thing missing is the arguing, but that’s what a husband and kids are for, right?